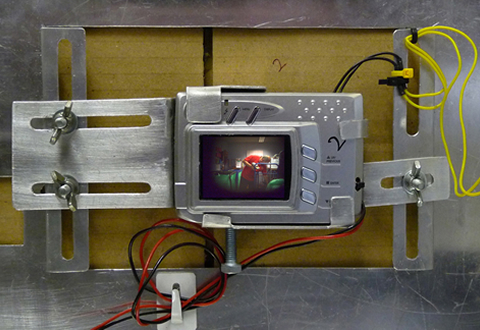 Tim Knowles has exhibited widely in the UK and Europe. An artist deeply committed to process, he engages invisible phenomena and uses this to shape physical experience. His work reveals hidden forces and the otherwise unnoticed timescale of objects by using specially engineered capture tools. Attracted to the energy of natural and social systems, Knowles defines chance as a crucial element of his visual discoveries.

Royal Mail gave Knowles unique access to its delivery system and sanctioned his inclusion of an artist-crafted monitoring device inside a parcel. Post Box E3-HS9 recorded its 902-mile journey from London to the Isle of Barra, in a sequence of 20,000 images, a continuous audio recording and a GPS track. This multitude of collected imagery and sound documented the movement of the package through the postal system. “At times, blurred pictures were taken by the moving cameras, and at others they were made in complete stillness – while the parcel sat at rest and observed the workings of the system going on around it, awaiting the next leg of it’s journey,” says Knowles.

One’s sense of waiting is highlighted by the exhibition’s title; “recorded delivery” is a mail service option in the UK by which a sender obtains signature proof when a parcel has reached its destination. Quietly unfolding its unpretentious storyboard, the collected data monumentalizes everyday occurrences. Art is a means to shift one’s vantage point – and for Knowles it is a practice that enables the public to borrow his eyes; humbling oneself with world’s vitality. 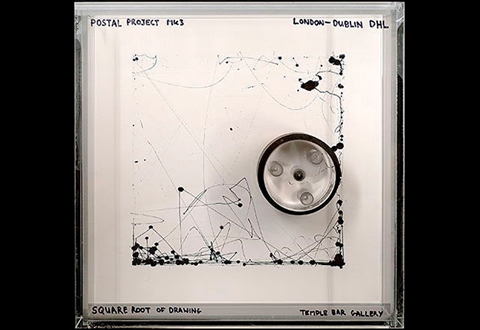 The package traveled 20 hours and 22 minutes. Post Box E3-HS9 captured its own experience – carried by foot, Royal Mail vans and trucks, a Boeing 737-300 cargo plane, a small Shorts 360 propeller Aircraft and a ferry. The array of resulting imagery depicts post office interiors, sorting facilities, people at work, the processing of mail and the many different modes of transport used during its journey.

The raw labor and humanness in this exercise stands at odds with the automatic process of time-lapse photography that Knowles employed for the project. Knowles explains, “There’s one lovely point when it must have been beside a door and you just hear this creaking noise like ‘eeeeeee’ over again as people enter and exit.” As a whole, the quiet moments in the sorting office are balanced compositionally by the parcel’s capture of lush color fields, humor and periods of abstraction.

Displayed for the first time as a photographic installation, the Post Box E3-HS9 project also consists of a website on which the journey can be followed, and a publication containing 155 color photographs. The Contemporary Art Society in London launched the book and online project in an event this past January. Accompanying the display in the gallery’s main space are three new works from the Postal series in the 6th floor Project Room. Produced in the readymade act of shipping, these pen and ink drawings document the trans-Atlantic travels from his studio en route to the gallery.

The Horticultural Society of New York will present a concurrent solo exhibition with Knowles April 27 to June 24. Inspired by Italo Calvino’s The Baron in the Trees, the show includes tree drawings and two recent seed dispersal projects, documented in the NYC urban landscape.