We enter a room and are plunged into semi-darkness. The room is dominated by an immense basin of water, ripples radiating across its surface in concentric rings. Intuitively we know that the sounds around us are closely related to the ripples, a fact reinforced by the water’s reflected movements on the surrounding walls through a sophisticated play of light.

As we get closer, it becomes clear that the sounds are emanating from speakers concealed under the basin, the source of the ripples on the water’s surface. The water acts as a medium in the sense that it acts as middle ground: stimulated by the sound and swept by the beams of light, it produces richly evocative reflections.

A latent photographic metaphor is at play in the installation: the water seems to take on the properties of a sensitive plate, with the sound imprinted  upon it and revealed  by the movement and stunning reflections projected on the walls. 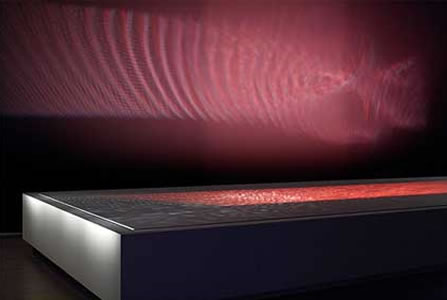 Presented as a “temporal sculpture,” Ondulation (2002) in those days exhibited at Digital Life Exhibition in Rome, a composition for water, sound and light, was created by Thomas McIntosh in collaboration with composer and friend Emmanuel Madan (the pair go by the pseudonym [The User]) and Mikko Hynnimen, a sound designer, lighting specialist, scenic artist and composer based in Helsinki, Finland.

The research that went into the making of Ondulation was conducted in three phases: the construction of the instrument; the design of the lighting system; and the composition of an audio-visual performance work. For Ondulation is presented as both an installation and a performance piece.

McIntosh and his collaborators began by working on a smaller version of the instrument during a residency at the Society for Arts and Technology (SAT) in Montreal during the summer of 2002.

A second residency at Lume Media Centre in Helsinki allowed them to construct the instrument to its full scale and produce the performance version of Ondulation, which premiered during the Avanto Media Arts Festival in November 2002 in Helsinki. 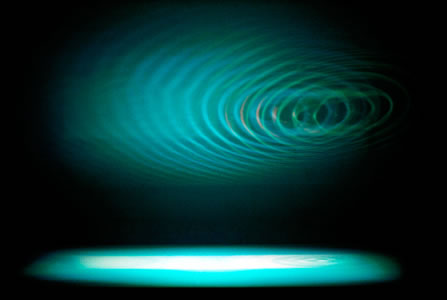 With Ondulation, McIntosh offers an experience that moves beyond aesthetics to establish itself in the real world and not merely in one imagined or symbolic.