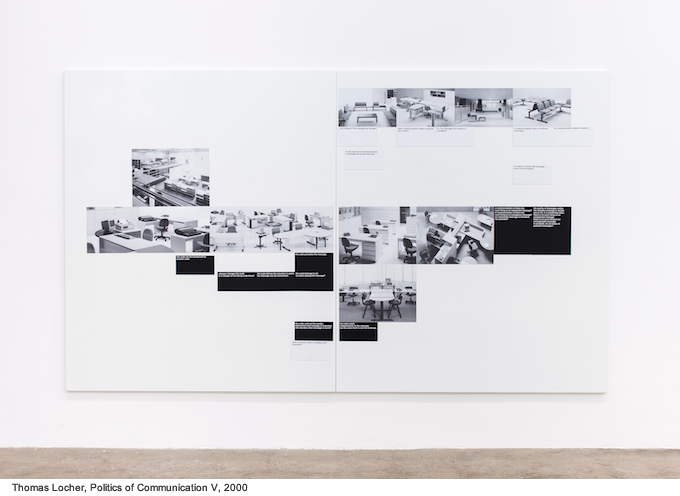 Long before post-internet aesthetics and ubiquitous networking began to overhumanize technology, men in gray flannel suits were the standard metaphor for the dehumanizing nature of corporate technocracy. This expression, which swiftly became vernacular, stems from a 1955 novel by Sloan Wilson, The Man in the Gray Flannel Suit, describing the search for purpose in a pre-digital context amongst those who perceived themselves as just an organic extension of managerial structures.

Post-Information, Thomas Locher’s current exhibition at Silberkuppe, in Berlin, is all about men in gray flannel suits – or rather, their absence.

In Post-Information, the display mirrors the subject matter: the exhibition spans two soberly staged rooms, which are metaphorically sealed off by the strategic positioning of an aluminium, shelf-like sculpture, Gestell (1990), obstructing the gallery’s entrance/exit.

The series Politics of Communication (2000), shown in the second room of the gallery, consists of five large-scale composites of image and text. The pictures are of office furniture ranging from sleek to functional – at times as individual items (office chairs), at times as complete ensembles (workstations, conference rooms, storage systems). Each grouping is accompanied by text captions, which either describe or examine the tenets of communication theory: the nature of information, message, code, medium, and meaning. Information is technical in nature. Strictly speaking, you cannot interpret information; you can only decode it. Within the rubric of information theory, an exchange lasts only as long as is necessary for the information to come through, from sender to receiver. Once both parties believe the message has been successfully transmitted, communication will typically end. To make use of Locher’s example (as mentioned in the press release):

A. Please give me a glass of water
B. (Hands the water to A)
A. Thank You 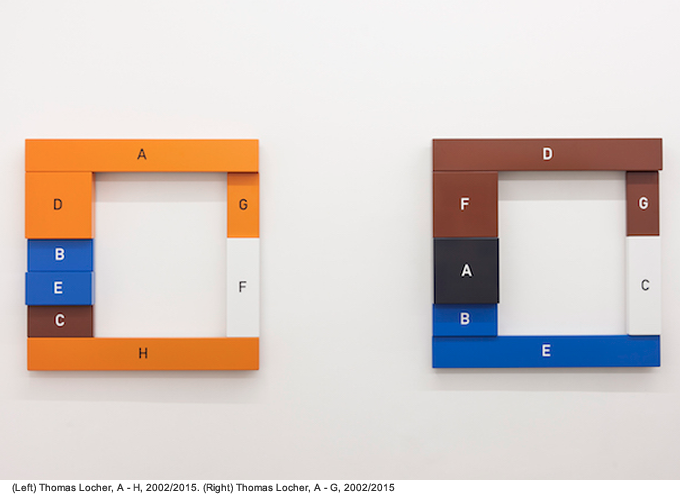 Information and communication theory treat human psychology as a servo-mechanical analogue – a comparison introduced by Norbert Wiener. A servo (short for servo-mechanism) is an automatic device that uses error-sensing feedback to correct the performance of a mechanism. As Niklas Luhmann puts it, “humans cannot communicate, only communication can communicate”. In systems theory, agency is a property that only emerges at the macro level, out of the combined action of all individual parts. Society, as a whole, is thus endowed with the volition that system theory denies that individual human actors possess. But since systems are operationally closed, a system has only its own operations at its disposal in order to form its structures. The only thing a system can will is to self-reproduce; communication is thus an operation that continuously replicates itself.

In Politics of Communication, corporate space appears to be fully determined by these rigidly choreographed communication protocols. Most of the text captions are descriptive rather than prescriptive, but even as descriptions, they seem to fit the operations of a recursive algorithm rather than those of a human society, where the determining factors of structure formation are hardly internal to the structures themselves. This programmatic character is echoed by another series on display in the gallery’s front room, A–G and A–H (2002-15), two frames mimicking floor plans, and by A.1—Z.2 (1989), a large-scale spreadsheet with all the information blanked out. Locher’s artistic career – which spans several decades – can perhaps be best described as an attempt to de-naturalize meaning.

His work is methodical and analytic (rare qualities, at present, when most artists tend to pictorialize everything). Forcing the viewer to undergo a deadening process of redundancy and repetition, the artist points to the slippage between “coercion from within” and “coercion from without” in the rhetorics of management – whose purpose as a social technology, as Locher makes increasingly apparent, is to strengthen integration and to implement corporate discipline rather than to convey information or promote communicational exchange.

System and information theory were typically construed as being strictly non-political, which means they do not represent social interaction as antagonistic, along the Marxist model of class conflict, but rather treat all types of “action” and “reaction” as an integrated equation. In Germany, in particular, these disciplines were used to displace the legacy of the Frankfurt School in social sciences. Friedrich Hayek and the Austrian school of economics were also eager to adopt the terminology employed by Wiener, arguing that order in market systems is an “emergent” property. But this order was already in place in Adam Smith’s description of market interaction, and regulating devices, like Watt’s governor – the original servo – had since the dawn of British liberalism been correlated with a political rhetoric that spoke of “dynamic equilibrium,” “self-regulation,” and “checks and balances.” 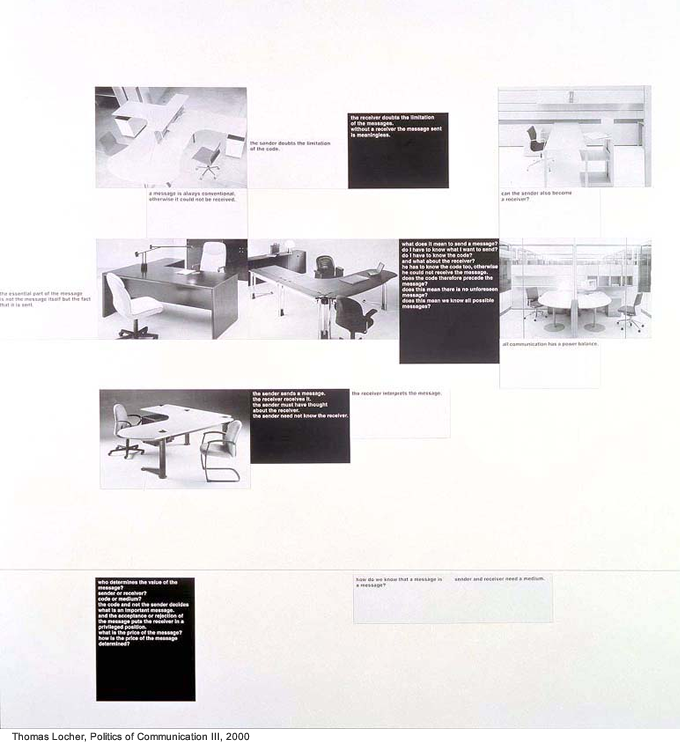 We’ve come a long way from IBM punch cards and the world the men in gray flannel suits used to inhabit. Our hetero-affective devices, like iPhones or Google glasses, conjure the fantasy of a highly fluid biosphere inhabited by virtual communities. As Fred Turner argues in From Counterculture to Cyberculture (2006), cybernetics managed to dissociate itself from its Cold War military-industrial connotations. From the 1960s onwards, many members of the budding counterculture came to embrace information technologies as tools for personal liberation, drawn to the promise of the new digital frontier: non-hierarchical governance, flexibility, and spontaneous structures.

Post-Information is a sober reminder that the type of social interactions communication theory describes is not ideologically neutral, however, nor is it devoid of coercion. As one of the captions reads: “a message is an obligation.”