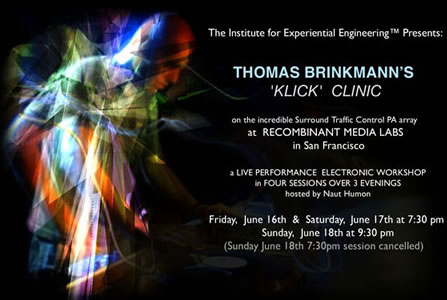 Notorious in the 90’s for his remixes of Plastikman (aka  Richie Hawtin) and Mike Ink, Brinkmann became one the international figureheads of experimental, dub inspitred techno on the Max Ernst, Traum Schallplatten and Mute Records labels. (under his “Soul Center” identity)

Fresh from headlining at Montreal’s MUTEK festival and his hometown in Cologne, Germany, you are invited to attend a very special educational event where Thomas  Brinkmann himself will pilot a series of provocative real time “sessions” on the science of sonic propagation hosted by RML’s director of operations, Naut Humon.

Come and meet Thomas as he demonstrates mixes and manipulations on the  extraordinary SURROUND TRAFFIC CONTROL immersive sound system. This is pure beat banging, texture mapping techno that’s totally out of the ordinary and then the KLICK format utilizes his experimental vinyl cutting techniques. Don’t miss this chance to be up close and personal with the music and its creator in a high resolution research  environment.

Though he’s been famed for productions on his own Max Ernst and Suppose labels, Brinkmann gained a prominence in the experimental and electronic  community for his full-length remixes (or as he terms them, “variations”) of material by Richie Hawtin and Mike Ink. The variations were made possible by playback of the original records on a turntable of Brinkmann’s own design, which included two tone arms with separate outputs for left and right channels.  With the two arms playing the track simultaneously from two different positions, previously nonexistent patterns are extracted from the music.

He is a former artist of the famous art school in DuNsseldorf, but got kicked out because of his radical arguments and modern thinking in terms of art. He started doing scratch loops in the beginning of the 80s because he liked the idea of a step sequencer. Mathematically thought out, he developed a precise art of scratching the the grooves with a sharp knife-like instrument into the vinyl. Complex grooves were the result and he started to do variations with the Studio 1 records, by using his special designed record player with the  two systems. He turned down the speed and came up with a dopplereffect which sounded like dub…. His sound  can be described as machine music with just a little bit of organic bump enough to make you jump & move. Each bass drum, each hi hat is detectable. This goes from very abstract minimal music to a more Krautrock electronic approach.

Accomplished artist and generous performer, Thomas Brinkmann likes to say that it’s all a question of turning knobs with precision and subtlety.  If fate plays in his favor, no doubt that all spectators confronted by his savoir-faire will have little chance against being magically struck by the force of his devastating dynamism.