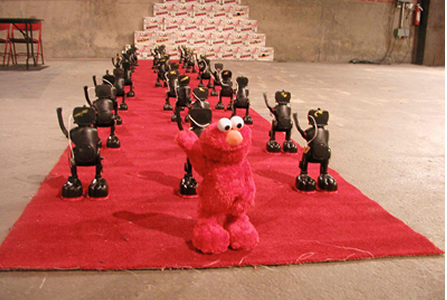 Theater of Code will present three performance / interventions that explore how computer code, scripting language, and software applications relate to the movement of bodies and the staging and choreography of our lives.

Adrianne Wortzel’s “A Re-enactment of The Battle of the Pyramids” is a performance installation of reconfigured robotic toys performing military maneuvers in rigid choreographed formations. Clusters of these toys snap to synchronization in response to a call to arms, their movements emulating the rigid and postured fighting strategies of Napoleonic warfare. These strategies, employed in Napoleon’s Egyptian campaign, were particularly idiosyncratic in Egypt where they were persistently performed without consideration of either the desert environment or the fighting strategies of the enemy. The work is intended as a testimony to the tragic consequences of imperialism and the dangers, follies and sadness of a rationale for blind obedience that makes victims out of warriors.

Ursula Endlicher’s “Website Impersonations: The Ten Most Visited” is a ten-part live performance series, which utilizes Web code as choreography. In the performance of facebook on March 3, 2009, at Light Industry, three dancers, the audience, and the artist will shape the course of the performance. The source of the website, its HTML tags, is interpreted live on stage into new dance movements, which are immediately translated into text-based descriptions and then stored online in the html-movement-library. This information is reused on stage as new instruction material. As the data performance progresses, more html-movements are developed, stored and altered by the participants. The user (=the audience) takes an active role in the performance of facebook.com.

The inclusion of the html-movement-library on stage enables a simultaneous exchange of instruction and performance, data and movement input and output, and a continuous transfer between Web and body. 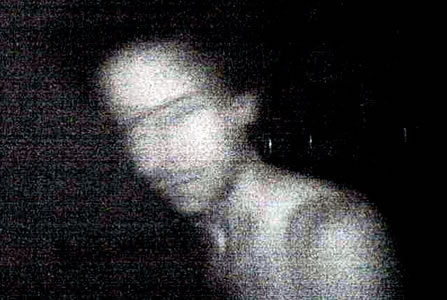 MTAA returns to Light Industry with two new performances of code-based art. In the first work, MTAA $”##’ re-stages John Cage’s 4’33” within a framework of a new media lecture. The second project is a demonstration of Autotrace, a software-generated appropriation and shape creation system. As part of the Autotrace performance, MTAA will use one of the newly generated “Autotraced shapes” to create a ridiculously large, two-dimensional, site-specific work right in front of the audience’s eyes.

Together, the three projects comment on the various levels in which our movements from military maneuvers to social interaction and the presentation of a lectures are encoded by technologies.

Light Industry is a new venue for film and electronic art in Brooklyn, New York. Developed and overseen by Thomas Beard and Ed Halter, the project has begun as a series of events at Industry City in Sunset Park, each organized by a different artist, critic, or curator. Conceptually, Light Industry draws equal inspiration from the long history of alternative art spaces in New York as well its storied tradition of cinematheques and other intrepid film exhibitors. Through a regular program of screenings, performances, and lectures, its goal is to explore new models for the presentation of time-based media and foster an ongoing dialogue amongst a wide range of
artists and audiences within the city.