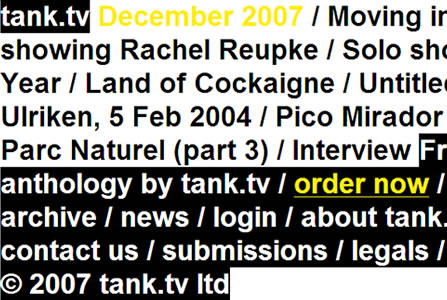 tank.tv is inviting submissions from 1st January to 1st March 2008 to its forthcoming show, The Whole World, curated by Ian White . The Whole World is a list of lists: a programme of artists’ film and video and an interactive online exhibition.

Both a formal device and a political strategy, film and video that deploys a list as part of its structure often does so with political intent: to subvert hierarchies, to undermine rationalism or to reveal contradiction. In contemporary culture the pop chart’s Top 10 has been replaced by an ever-expanding craze for “Top 100s” of everything from Hollywood genres to celebrity gaffes. The Whole World attempts to wrestle back the initiative

The Whole World is situated somewhere between the absurd and obsessive enterprises of Flaubert’s eponymous characters Bouvard and Pecuchet (they hopelessly collect and explore until, exhausted, they revert to their original jobs as copy clerks) and the Japanese animated game Katamari in which players roll all matter  objects, buildings, landscapes, the world itself – into snowballing globes of stuff. The Whole World is ridiculous and irreverent, ambitious and viral.

Viewers are invited to contribute to the programme selected by Ian White by uploading their own video list, be that an extract from an existing work or something made specially for the purpose, to compile a unique, exponential collection: an extraordinary list of lists, of the world as we know it  the whole world.

Work will be selected to join the online exhibition as well as a rolling tank.tv programme on the CASZartscreen in Amsterdam .

•  Submissions will be accepted prior to, and throughout the exhibition online.

tank.tv is an inspirational showcase for innovative work in film and video. Dedicated to exhibiting and promoting emerging and established international artists, www.tank.tv acts as a major online gallery and archive for video art. A platform for contemporary moving images.