The Tanks: Art in Action. Aldo Tambellini exhibition and other events 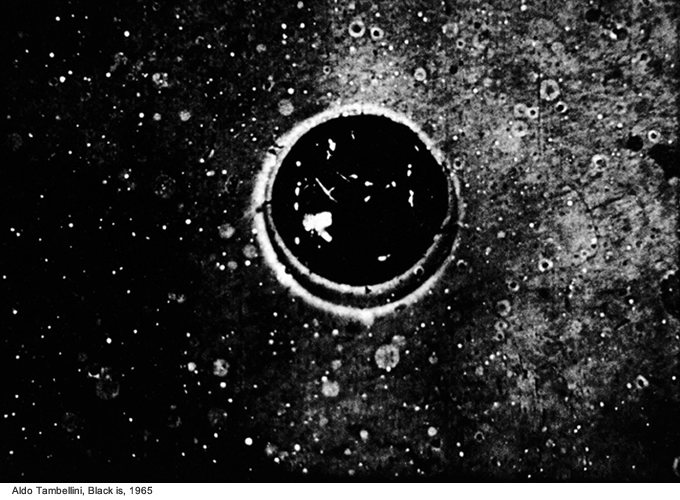 15 Weeks of Art in Action, the opening programme of the new Tanks at Tate Modern, reaches its final weeks in October with an electromedia installation and performance by cross-disciplinary pioneer Aldo Tambellini, a major installation and series of performances revisting the work of the Filmaktion group, a restaging of Juan Downey‘s 1973 experimental video performance Plato Now, and the performance series and symposium dedicated to performative projection, Playing in the Shadows.

Aldo Tambellini (b.1930) is a revolutionary figure who pioneered multimedia and multisensory work at the heart of the New York avant-garde during the 1960s. A major recreation of his electromedia events will highlight his innovative incorporation of painting, performance, slide and film projections, video and sound to create dazzling, immersive media environments.

Tambellini has been devoted to political and creative change throughout his career. He was one of the earliest artists to use video and television as a medium, and he helped to establish several collectives and venues in New York’s Lower East Side—including Group Center, The Gate Theatre, The Black Gate Theatre, and collaborations with dancers, musicians and the Umbra Poets, a group of black poets and activists with whom he met regularly—that contributed substantially to the development of cross-disciplinary art. In addition to the Tanks installation, a screening of Tambellini‘s films will take place on 13 October at 18h, followed by two key performances, Black Zero (1965) and Moondial (1966), which will be re-staged on Saturday 13 October at 21h. These early examples of multimedia performance will transform the Tanks into a hypnotic and mystical environment incorporating projections, dance, live music and sound. 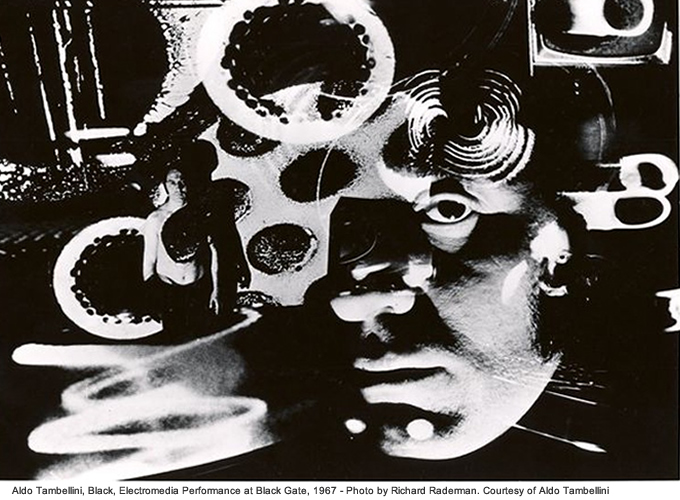 Filmaktion is the name used by a group of filmmakers who performed together during an intense period of activity in the early 1970s. The core members—Malcolm Le Grice (b.1940), William Raban (b.1948), Gill Eatherley (b.1950) and Annabel Nicolson (b.1946)—are major figures in the development of experimental film in the UK. An ambitious series of events in the Tanks will revisit some of the key performances and installations that allowed these artists to radically reshape the experience of film and the cinematic viewing space. Highlighting the importance of collective practice to British artists’ film-making, this week-long series of events will celebrate Filmaktion’s radical expansion of the role of both cinema and the spectator.

Mornings throughout the week will be devoted to a series of installations by Eatherley, Le Grice and Raban, while afternoons will feature free timed live film performances. On Saturday 21 October at 20h, a ticketed performance will feature Le Grice’s After Leonardo in collaboration with musician and AMM co-founder Keith Rowe, as well as projections by Eatherley and Raban.

Chilean artist Juan Downey‘s (1940–1993) innovations in video, sculpture and interactive performance encouraged reflection on perception and the self to generate a more complex multicultural discourse. Drawing together advances in technology with an interest in the rituals of his native Latin America, Downey engineered ‘invisible architectures’ to rethink connections between society, history, information and the environment.

As part of The Tanks opening programme, Tate Modern will restage for the first time Juan Downey‘s 1973 video performance Plato Now, a work presented originally at the Everson Museum of Art in Syracuse, NY.

The 1973 event consisted of nine participants (including the artist Bill Viola and the curator David Ross) meditating with their backs to the audience. A row of nine video monitors positioned between the meditators and the audience allowed spectators to view the faces of the performers on closed-circuit television while shadows of the public animated the wall behind. Those participating in meditation were provided with sensors to monitor the alpha waves generated by their brain activity, which transmitted pre-recorded quotations from Plato’s Dialogues to headphones worn by each performer. This complex network of psychic trance, mediated gazes and silent communication reconsiders the allegory of Plato’s cave for the Cybernetic age, challenging the hierarchies of the original parable. 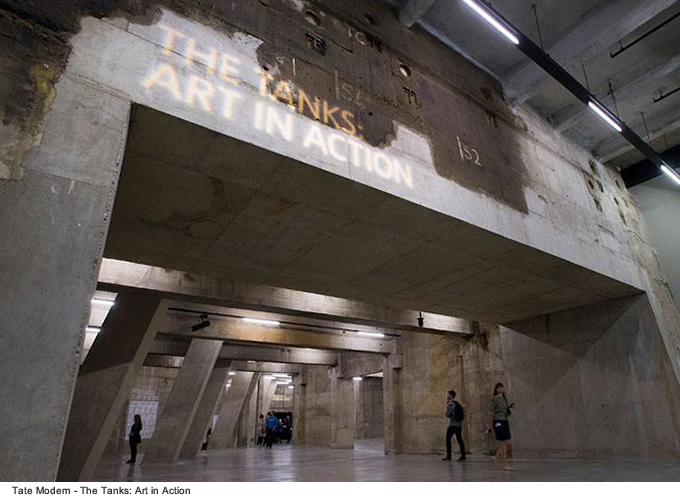 Responding to the subterranean darkness of the Tanks and the radical experiments in projection and action included in the Tanks’ opening programme, Playing in the Shadows is a two-day symposium examining how artists and filmmakers have critically occupied the spaces between light and darkness, image and action.

The notion of performative projection, revisiting early precedents such as phantasmagorias and shadow plays, will be investigated through a collection of talks, discussions, screenings and performances highlighting a long tradition of work that animates our primal connection to the play of projected light and shadow. Reconsidering the darker side of modernism, this symposium moves out of the white cube and into the darkness, the space of projection, and towards artists’ efforts to intervene directly in the apparatus of cinema. Participants include Noam M. Elcott, Melissa Ragona, Lucy Reynolds, and others.