The Senster, commissioned by the electronics giant, Philips, for their permanent showplace, the Evoluon, in Eindhoven, was a much bigger and more ambitious piece of work than SAM. In addition to responding to people’s voices, the Senster also responded to their movements, which it detected by means of radar, and was the first robotic sculpture to be controlled by a computer. It was unveiled in 1970 and remained on permanent show until 1974 when it was dismantled.

Its size – it was over 15 feet (4 m) long and could reach as high into the air – made the use of aluminium castings inappropriate, so it was welded out of steel tubing, with the castings employed only in the more intricate microphone positioning mechanism. Its behaviour, controlled by a computer, was much more subtle than SAM’s but still fairly simple. 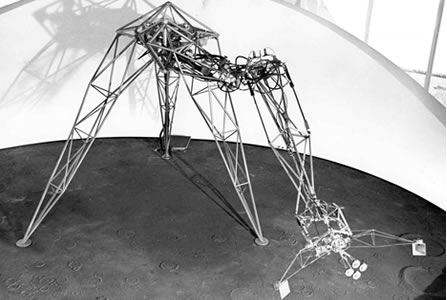 The microphones would locate the direction of any predominant sound and home in on it, rather like SAM but much more efficiently, and the rest of the structure would follow them in stages if the sound persisted. Sudden movements or loud noises would make it shy away. 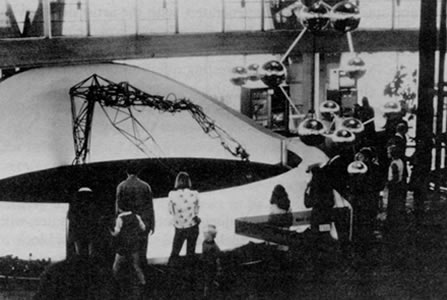 The complicated acoustics of the hall and the completely unpredictable behaviour of the public made the Senster’s movements seem a lot more sophisticated than they actually were. It soon became obvious that it was that behaviour and not anything in its appearance which was responsble for the impact which the Senster undoubtedly had on the audience.