The Romantic Disease: An Artistic Investigation of Tuberculosis 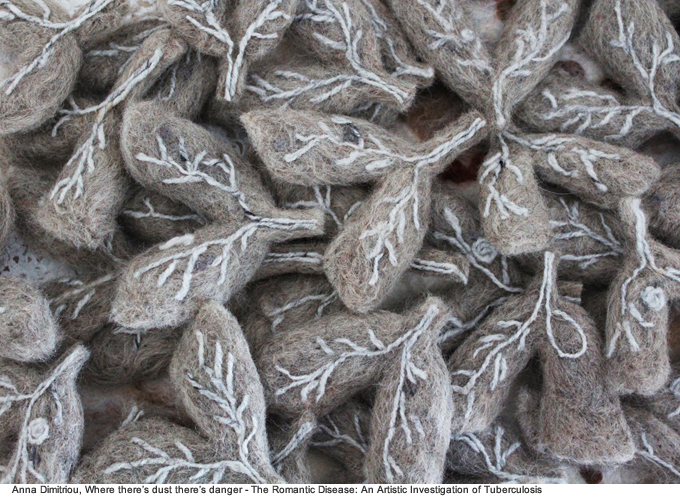 The exhibition is curated by Irini Papadimitriou

The Romantic Disease: An Artistic Investigation of Tuberculosis is a ground-breaking solo exhibition by artist Anna Dumitriu, showing installations and sculptures made with strains of mycobacteria, transformed historical artefacts, and textiles that our reveal the complexities of the history of Tuberculosis (TB) and our responses to the disease.

Anna Dumitriu is fast becoming Britain’s most celebrated bio-artist. She is best known for creating textile art with and about bacteria, in particular stitching textiles with superbugs such as her “MRSA Quilt”. For The Romantic Disease: An Artistic Investigation of Tuberculosis, she has worked at the cutting edge of research alongside Oxford University and Public Health England scientists from the UK Clinical Research Consortium: Modernising Medical Microbiology Project.

The Romantic Disease: An Artistic Investigation of Tuberculosis explores the history of TB from artistic, social and scientific perspectives and covers subjects such as superstitions about the disease, its literary and romantic associations, the development of antibiotics and the latest research into whole genome sequencing of bacteria. It has been made in collaboration with a number of leading organisations including the charity Target TB and Brighton and Sussex Medical School, who discussed ideas and gave advice about the project. 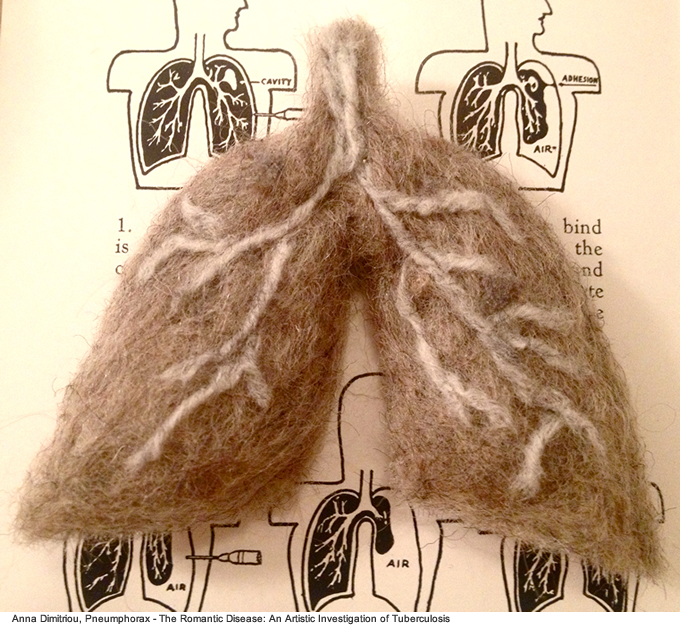 Artworks in The Romantic Disease are made with a combination of textile art and biological matter including strains of Mycobacterium vaccae, M. bovis and M. tuberculosis that have been sterilized prior to exhibition. Re-crafted historical artefacts and objects are added to the mix.

For example, Dumitriu has developed a series of textile installations stained with bacteria dyes patterned using antibiotic “resists”, which focus on how early “antibiotics”, such as Prontosil, were derived from chemical dyes. For Where there’s dust there’s danger she has created a series of tiny felt lungs from wool and dust onto which she has incorporated the DNA of killed Mycobacterium tuberculosis in a Containment Level 3 Laboratory (the highest level for handling bacteria). Around a century ago dust was incorrectly thought to be one of the primary causes of the disease. Amongst the altered historical artefacts an intricately carved and engraved Pneumothorax Machine can be found, previously used to collapse lungs of unfortunate patients ‘to give them a rest’.

As well as the exhibition, The Romantic Disease has an “open lab” workshop with Anna Dumitriu, Dr Simon Park and Dr Melissa Grant. This will run on five Saturdays, 11am – 5pm, on 15th and 22nd February, 1st, 15th and 22nd March 2014 and visitors on those days will see the group at work in the gallery. www.openlabworkshop.eventbrite.co.uk

A major one day symposium with key speakers in the field of TB and press conference will be held at Waterman’s for World Tuberculosis Day on 24th March. The latest research into this disease, which currently affects one third of the World’s population, will be discussed in a highly accessible way. 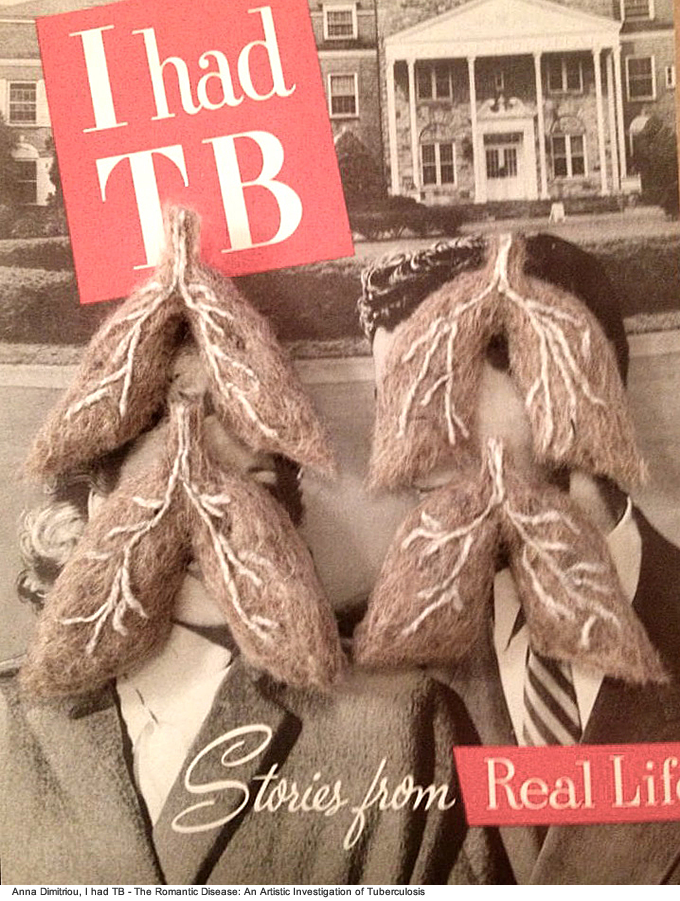 Anna Dumitriu works in the field of art -science and has a strong interest in the ethical issues raised by emerging technologies. Her installations, interventions and performances use a range of digital, biological and traditional media including live bacteria, robotics, interactive media, and textiles. Her work has a strong international exhibition profile and is held in several major public collections, including the Science Museum in London. Dumitriu is known for her work as founder and director of The Institute of Unnecessary Research, a group of artists and scientists whose work crosses disciplinary boundaries and critiques contemporary research practice. She recently completed a Wellcome Trust commission entitled The Hypersymbiont Salon, is collaborating as a Visiting Research Fellow: Artist in Residence with the Adaptive Systems Research Group at The University of Hertfordshire (focussing on social robotics) and (Leverhulme Trust 2011) Artist in Residence on the UK Clinical Research Consortium Project Modernising Medical Microbiology at The University of Oxford. Her major international project Trust me I’m an Artist, Towards an Ethics of Art-Science Collaboration, in partnership with the Waag Society in Amsterdam and The University of Leiden, investigates the novel ethical problems that arise when artists create artwork in laboratory settings. She was winner of the 2012 Society for Applied Microbiology Communication Award. www.normalflora.co.uk

Anna Dumitriu has been Artist-in-Residence for Modernising Medical Microbiology Project (MMM) since 2011 and the exhibition stems directly from her involvement with their research. MMM is UK wide consortium funded by the Wellcome Trust and Medical Research Council, comprising the University of Oxford, Public Health England and the Wellcome Trust Sanger Institute; to establish how revolutionary new technologies can be optimally intergrated into microbiology research and service strategic vision. www.modmedmicro.co.uk

Brighton-based charity Target TB has been collaborating on the exhibition by researching current beliefs on the causes of and cures for the disease in the developing world. Target TB works to stop vulnerable people in Africa and Asia dying from TB by improving access to information, treatment and care and support.

‘The long history between TB and humans isn’t over – we see the harm that the disease brings to the lives of people living in poverty in Africa and Asia every day in our work. But for many people in the UK and in other developed countries, TB is hidden, far away in the past. What is so exciting to me about Anna’s exhibition is that by exploring this rich history, and starting new conversations about the disease, she is shedding light on the TB epidemic in the world today. We can’t wait to start talking to people about TB. It’s been amazing working with Anna – as we tell stories about TB myths and beliefs gathered from our front line work in say Uganda, or Timor-Leste, you can see on her face as she listens that she is already making connections, bringing quite disparate things together to shape her artistic response. The result makes us see the disease in a new way, it’s been fascinating”. Lynn Stevens, Fundraising & Communications Manager at Target TB www.targettb.org.uk 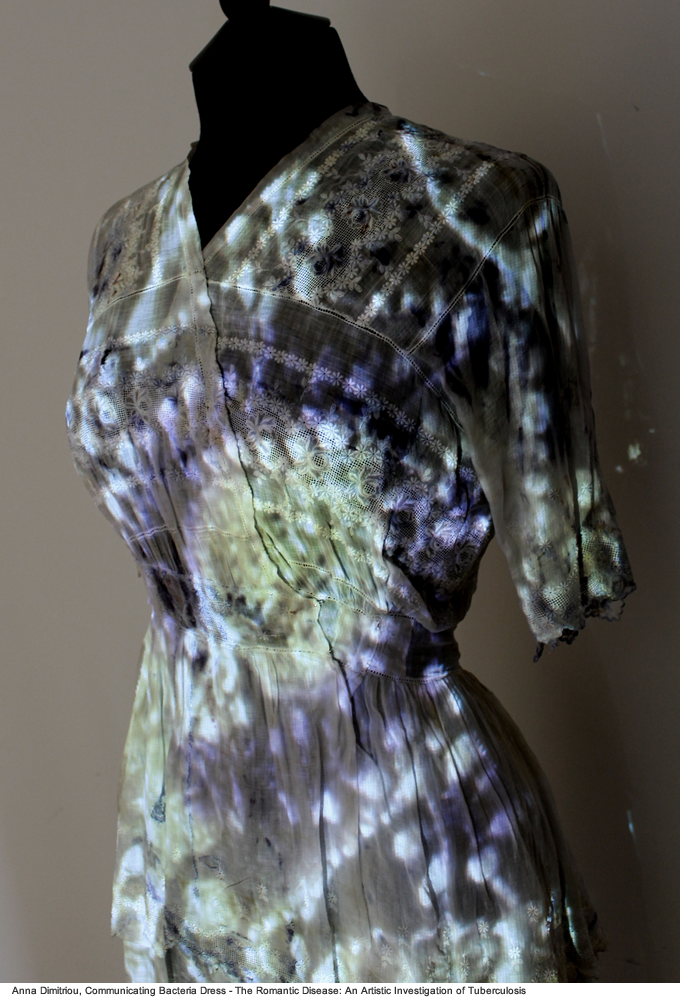 Watermans is a world-class cultural organisation in West London that sits at the nexus of production and consumption in the arts. Their gallery is one of the UK’s leading venues for Digital and New Media Arts with a long history of expertise and commitment in presenting innovative work as well as supporting emerging and established artists working with new technologies. The exhibition is curated by Irini Papadimitriou.

The Romantic Disease: An Artistic Investigation of Tuberculosis has been funded by an Arts Award from The Wellcome Trust, a global charitable foundation dedicated to achieving extraordinary improvements in human and animal health. It supports the brightest minds in biomedical research and the medical humanities. The Trust’s breadth of support includes public engagement, education and the application of research to improve health. It is independent of both political and commercial interests. www.wellcome.ac.uk 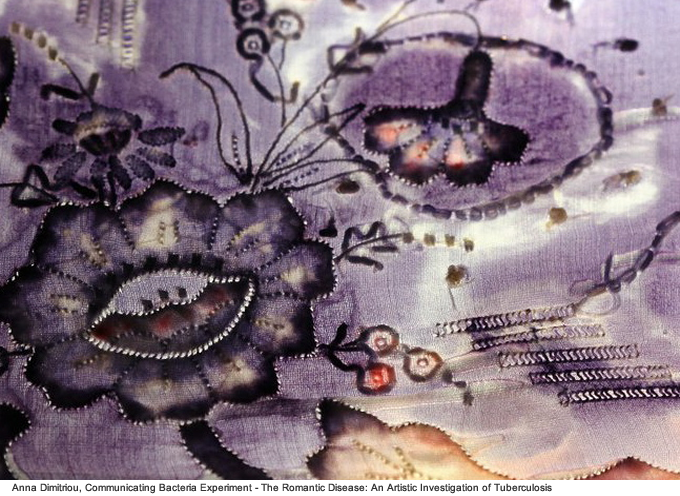