The Museum of Contemporary Commodities. An invitation by Furtherfield Gallery 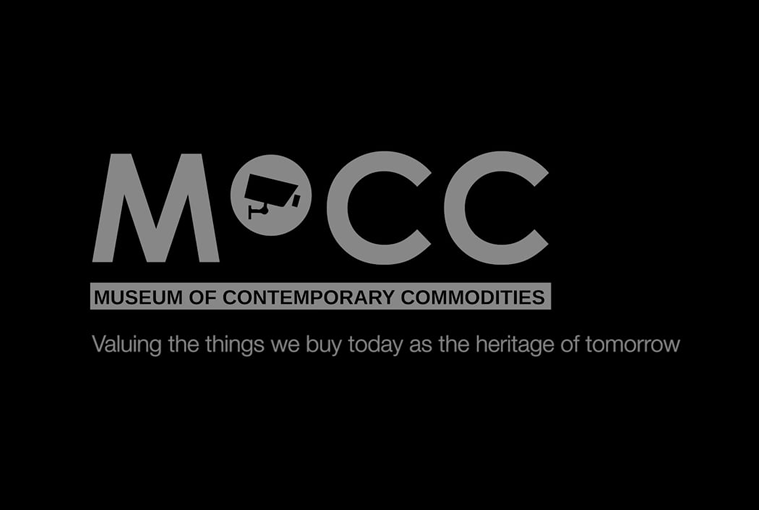 Floating in the North Pacific Ocean, around 135°W to 155°W by 35°N and 42°N is a formation that has become known as the ‘Pacific Trash Vortex’ or slightly less dramatically, the ‘Great Pacific Garbage Patch’.  A massive agglomeration of waste plastic that, due to the prevailing pacific currents, is pulled into this expanse of water that is the size of Texas.

The slow rotation of the North Atlantic Gyre pulls scattered plastic waste towards the centre of the vortex, where it remains, and will remain, for generations, ever growing in scale and slowly breaking down into micro pieces readily consumed by birds and sea life, choking the entire marine eco system. There is something highly emblematic about this process, an analogue at the end point of the chain of consumption – itself today a treadmill of shopping, consumption and disposal.

The Pacific Trash Vortex is the repressed unconscious of contemporary consumer culture – our things pass though us while barely touching the sides. We have a culture in which it is becoming a faux pa to ‘re-wear’ clothes, where even clothing such as fleeces or high end jackets made from recycled plastic eventually find their way into this vortex of trash. 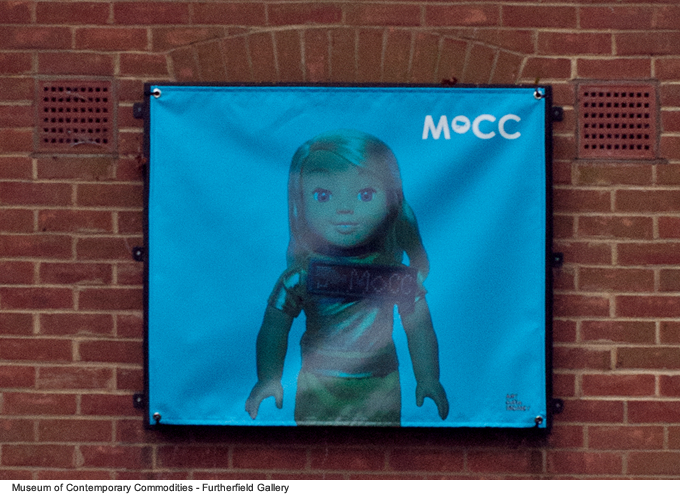 Plastic wrappers that takes generations to degrade are used to package other plastic items, CDs and Blu Rays in cellophane wrappers, the use of packaging to merely suggest freshness, newness, a purely psychological marketing effect that creates an artificial borderline between the new and pristine and trash within moments of use.

The cyclical movements between commodity and waste has become an accelerated cycle, one effect of which is the trash vortex, but another is that the way we interact with, experience and make meaning from the commodities we consume has also altered.  Buying a dress from Primark, wearing it once and then disposing of it (with good conscience) in a clothes bank (which incidentally then contributes to the destruction of indigenous clothes manufacture in Africa) means a limited and fleeting relationship with that dress – its value resides merely in its newness, the novelty and immediate affective rush of purchase and unpacking.

In one of his best known pieces the great theorist of postmodernity, Fredric Jameson, writes about Vincent Van Gogh’s painting of a pair of peasant’s shoes, well-worn and weather beaten – they embody an entire world, make present a way of life, with all its hardships and ground in life. In contrast to this, argues Jameson, is Andy Warhol’s Diamond Dust Shoes painting, which elides all such meaning and depth, reveals nothing of a world but rather simply a surface play of meaning, disconnected to any lived reality, existing only in the hall of mirrors that is consumer culture – this is, in a way, the reproduction of trash in symbolic form. 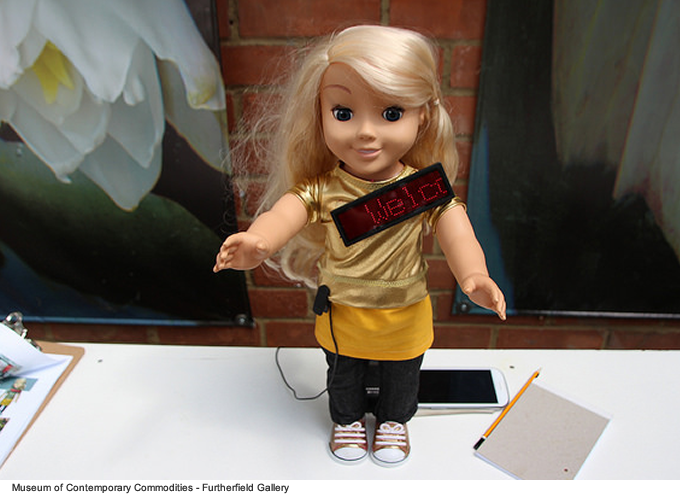 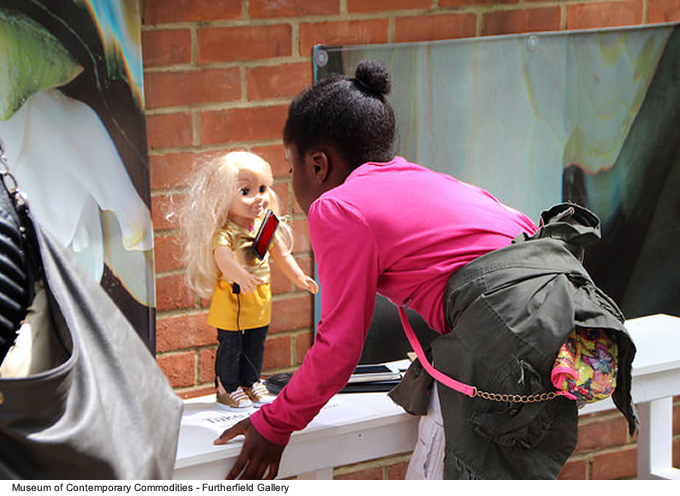 It is that latter mode – the surface, the empty signifier that means nothing and everything – that defines how we are encouraged to engage with our things, which, in the age of neo-liberal capitalism, are ever more defined as commodities. Indeed the thing that defines a commodity more than anything else is that it can be bought and sold, more even that it is made to be bought and sold; the measure of a commodity is price, not use, and as such we are always in a struggle to make them ours, to give them meaning, to inject them with life – and capital is always trying to return them into circulation, to feed the vortex.

The Museum of Contemporary Commodities – on exhibition at the Furtherfield Gallery in Finsbury Park, London – is engaging the nature of our stuff – how commodities enter and disappear from our lives – exploring these issues with a novel take on the practice of curating. Rather than simply gathering together objects and putting them in glass cabinets the idea is to “Consider every shop, online store and warehouse full of stuff as if it were a museum, and all the things in it as part of our collective future heritage”.

MoCC is an art-social science project led by artist Paula Crutchlow (Blind Ditch) and cultural geographer Ian Cook (University of Exeter) in collaboration with Furtherfield as part of their larger project “Art, Data, Money – Building a commons for arts in the network age”. http://www.furtherfield.org/artdatamoney/

This is a form of curation as critical practice, in which an act of reflection produces a perceptual shift in which we interact with the things around us in a slightly different way that makes present the dynamics that the current commodity system is always trying to hide. 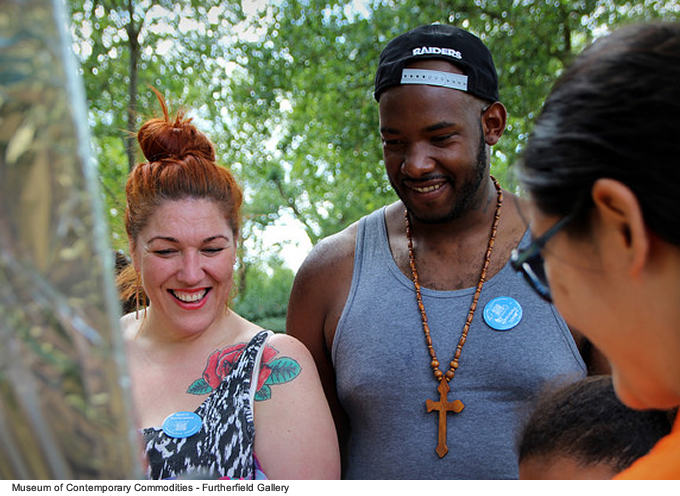 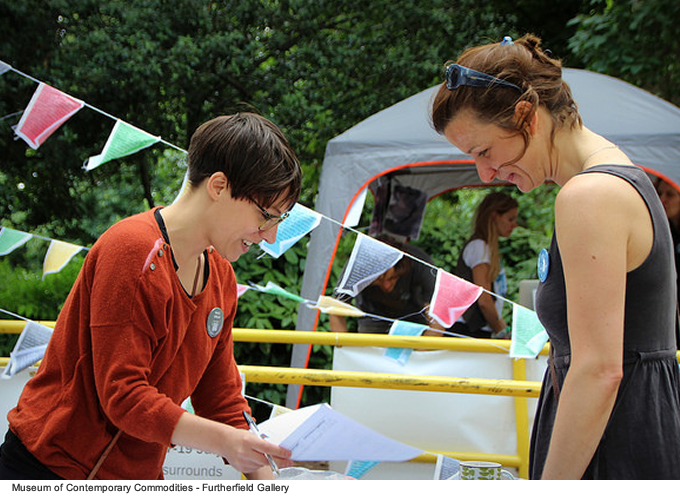 The Museum of Contemporary Commodities, or MoCC, will invite its audience to upload images of commodities that are meaningful to them, building an archive of the depthless detritus of everyday life, but one in which such passing objects are reinvested with personal meaning, a process of domestication that one hopes will help make visible the hidden vortex and indeed even begin to unravel it.

There are a number of attendant events, last 17 October the MoCC was asking people to drop into the Furtherfield Commons for a ‘walkshop’ and a ‘commodity consultation’, where as well as exploring our relation to commodities and asking ‘what kind of shopper are you?’, because the reality is that our things are not the only commodities in circulation, the product is, of course, us.

We ourselves are constructed as consumer objects by the nature of the data that our shopping, or just moving around the city, produces – a world today in which we all have parallel lives as clusters of bits and bytes circulating through the data farms of supermarkets and online retailers, soon to become the digital version of the trash vortex. 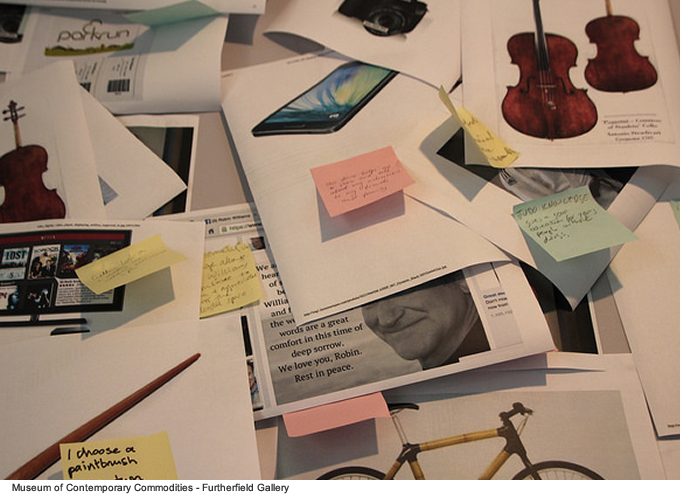 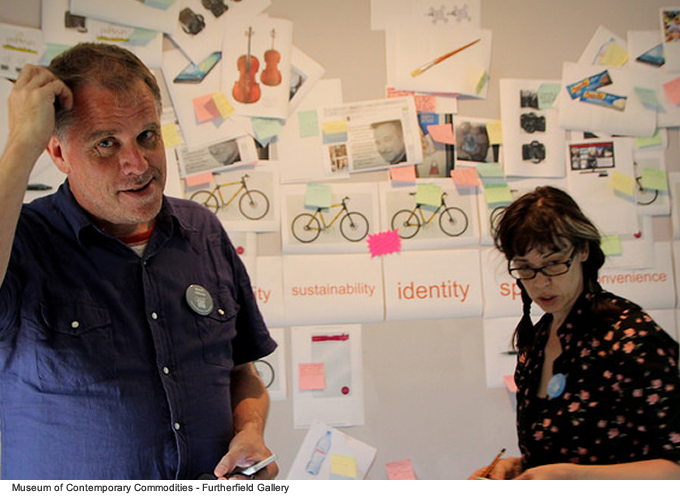 So, what is the lived experience of our ‘stuff’ today? Mostly it resembles the passing vortex of the islands of trash, and we – as data objects – are caught in that, the MoCC is one approach to stepping out of that circuit and reflecting on the human place in all of this, and that’s before we even start to consider the lives of the people who are caught up in producing all this material. What kind of heritage to we wish to leave the coming generations? This question alone is one that forces us to reconsider what we buy and what we do with it.