The Leonor Annenberg Prize for art and social change 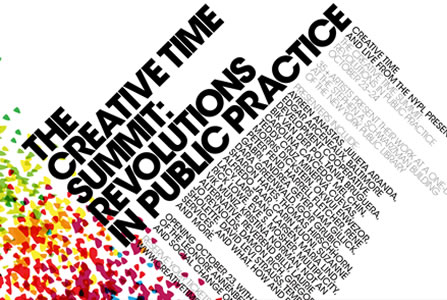 THE LEONORE ANNENBERG PRIZE FOR ART AND SOCIAL CHANGE:

Creative Time is pleased to announce the inception of a new, 25,000 USD award: The Leonore Annenberg Prize for Art and Social Change, presented by Creative Time to an artist who has committed her/his life’s work to social change in powerful and productive ways. The first recipient of the prize is The Yes Men, and it will be bestowed during the opening ceremony for The Creative Time Summit: Revolutions in Public Practice, on October 23 from 6 to 8pm in the historic Stephen A. Schwarzman building of the New York Public Library. The ceremony will feature an introduction by Amy Goodman, the host of the award-winning program “Democracy Now!”. The award is generously supported by The Annenberg Foundation.

The Leonore Annenberg Prize for Art and Social Change and The Creative Time Summit further Creative Time’s 35-year-long commitment to commissioning and presenting groundbreaking, historically important artwork and fostering a culture of experimentation and change.

The Leonore Annenberg Prize for Art and Social Change is named in honor of Mrs. Annenberg’s life-long dedication to supporting the artistic voice in our culture, and to the vital role of art in educating and expanding our cultural dialogue. The Yes Men, a legendary group of culture jammers is, through their longstanding practice of invading and subverting modes of corporate communication, at the forefront of a movement to produce substantive change in our world. The Yes Men were selected by a distinguished jury of artists and thinkers.

The Yes Men agree their way into the fortified compounds of commerce, ask questions, and then smuggle out the stories of their hijinks to provide a public glimpse at the behind-the-scenes world of business. Over the years they have also launched some very unconventional products—from the Dow Acceptable Risk calculator (a new industry standard for determining how many deaths are acceptable when achieving large profits), to Vivoleum (a new renewable fuel sourced from the victims of climate change. The gonzo political activists were the subject of a documentary film, The Yes Men (2003), and their new documentary film, The Yes Men Fix the World (2009), was awarded the prestigious audience award at the Berlin International Film Festival. Their film The Yes Men Fix the World recently debuted in theatres in the UK and on HBO in the United States, and will be released nationally in theatres in October. More information about the film and a trailer can be found at http://theyesmenfixtheworld.com

The Yes Men perfectly capture the spirit of the award, which honors an artist or artist group for historically significant work that has an expansive impact on society. At the ceremony, they will give an interactive, performative lecture. 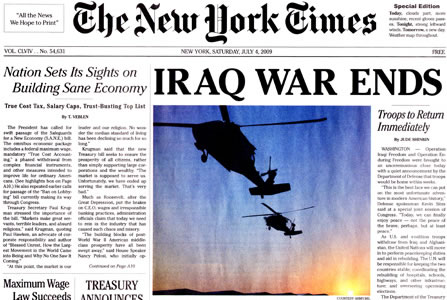 The prize will be awarded in a ceremony that also opens The Creative Time Summit: Revolutions in Public Practice. The Summit is presented by Creative Time and LIVE from the NYPL as part of the LIVE from the NYPL fall season. The Summit continues on October 24, from 10am to 7:30pm, with over 35 international cultural producers whose work has made an impact in the world giving presentations.

These artists, thinkers, and activists range from anarchist collectives to art world luminaries. Their approaches intend to not only reflect, but also act upon moments of historic change, breaking the traditional barriers between art, culture, and politics. The Creative Time Summit will give attendees a chance to see a vast array of artistic practices in rapid-fire presentations, taking place back-to-back all day. These artistic practices defy easy museological categories, and aggressively blend art, politics, and space. Presenters include Okwui Enwezor, Thomas Hirschhorn, Temporary Services, Baltimore Development Cooperative, Not An Alternative, and many more. For a detailed schedule with a full list of presenters grouped by theme, visit http://creativetime.org/programs/archive/2009/summit/summit.html#info

Available concurrently with the presentations will be a separate, flexible conversation space, where each of the presenters will gather to be available for one-on-one conversations with attendees. This space will replace the traditional question-and-answer model, in favor of a more discursive, interactive approach.

ABOUT LIVE FROM THE NYPL

LIVE from the NYPL is a series of lively and provocative conversations, debates, and performances at The New York Public Library curated by Paul Holdengräber, Director of Public Programs. Past participants have included Werner Herzog, Christopher Hitchens debating Al Sharpton, an opera based on “The Elements of Style” by Maira Kalman and Nico Muhly, Gunter Grass in conversation with Norman Mailer, Miranda July with David Byrne and Becky Stark, Aline and R. Crumb, Mario Batali and Anthony Bourdain, Harold Bloom, Nicholas Kristof, and Orhan Pamuk. For more information, please visit http://www.nypl.org/live or email live@nypl.org.

The Leonore Annenberg Prize for Art and Social Change and The Creative Time Summit continue Creative Time’s 35-year history of igniting the cultural development of New York City and supporting artists who work toward social change with ground-breaking art. Creative Time: The Book was published on the occasion of the institution’s 33rd birthday, exploring each of its projects presented since 1974. Creative Time’s recent projects include “Jeremy Deller’s Conversations About Iraq”, Paul Chan’s “Waiting for Godot” in New Orleans, “Tribute in Light” and “PLOT09: This World & Nearer Ones”, New York City’s first public art quadrennial. The organization has worked with 1,400 of the world’s most dynamic artists in 17 states across the nation.

The Leonore Annenberg Prize for Art and Social Change is made possible through the generous support of The Annenberg Foundation. Support for the Creative Time Summit is provided by the Lambent Foundation, a Project of the Tides Center, the Trust For Mutual Understanding, the Gladys Krieble Delmas Foundation and The Consulate General of the Netherlands in New York. Creative Time is funded through the generous support of corporations, foundations, government agencies, and individuals. We gratefully acknowledge public funding from the New York City Department of Cultural Affairs; the New York State Council on the Arts, a State agency; New York City Council Speaker Christine C. Quinn; and New York State Senator Thomas K. Duane. The official hotel partner of Creative Time is The Standard