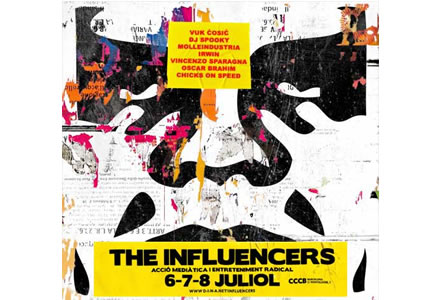 Welcome to episode three of The Influencers series, the live talk show you won’t see on TV! With us tonight, we have media pranksters, star remixers of ideas, saboteurs of academic categories and reality agitators of every stripe.

Over the next three days, our 7 guests will present their work and discuss it with us. They will take us into stories of collective hallucinations that turn into reality and vice versa, like the time a Nazi icon was used to celebrate the patron-hero of a socialist state, or that fun time we spent bribing scientists and crushing workers so that our junk food company would come out on top (at least in a videogame).

Our 7 guests will talk about the origins of their projects, their challenges and objectives, giving us all the dirt on the strategies that work while suggesting clues we can use to explore subterranean affinities through different periods, disciplines and cultural contexts. Acquisition of other identities on a mass scale and a trip through the turbulences of information flows are our recommended
remedies to July sunburn and other nuisances.