The Human Face of Cryptoeconomies 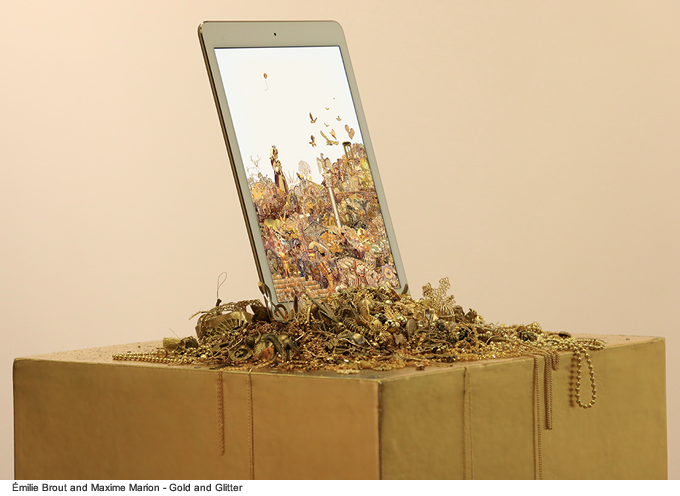 Furtherfield has launched its Art Data Money programme the last beginning of September with The Human Face of Cryptoeconomies, an exhibition featuring artworks that reveal how we might produce, exchange and value things differently in the age of the blockchain.

Facecoin by Rob Myers – Bitcoin hashes repurposed to create automated Facecoin portraits. Have you ever looked for faces in the clouds, or in the patterns in the wallpaper? Well, Facecoinis an artwork that is a machine for creating patterns and then finding ‘faces’ in them. It is both an artwork AND a prototype for an altcoin (a Bitcoin alternative).

Facecoin creates patterns by taking the random sets of data used to validate Bitcoin transactions and converting them into grids of 64 grayscale pixels. It then scans each pixel grid, picking out the ones that it recognises by matching its machine-definition of a human face. Facecoin uses the production of  “portraits” (albeit by a machine) as a proof-of-aesthetic work. Facecoin is a meditation on how we discern and value art in the age of cryptocurrencies. 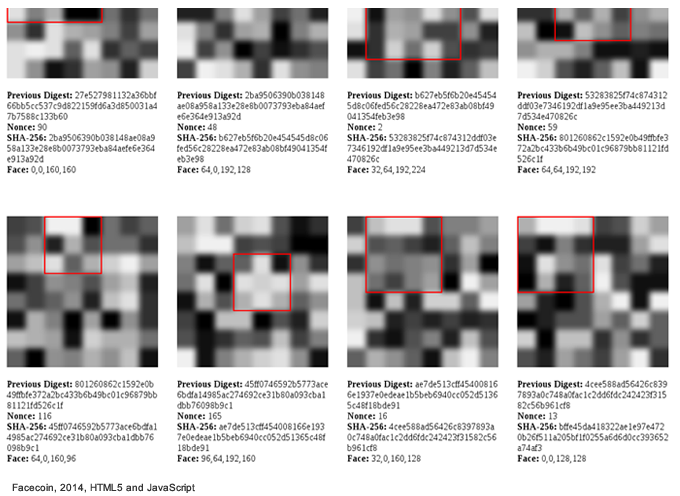 Shareable Readymades by Rob Myers: Iconic artworks on demand, iconic 3D printable artworks for an era of digital copying and sharing. Duchamp put a urinal in a gallery and called it art, thereby transforming an everyday object and its associated value. Rob Myers takes three iconic 20th century ‘readymades’ and transforms their value once again. By creating a downloadable, freely licensed 3D model to print and remix, everyone can now have their own Pipe, Balloon Dog and Urinal available on demand. Click here to collect your own special edition version of these iconic artworks.

Gold and Glitter by Émilie Brout and Maxime Marion: Ornamental Gold and Glitter installation created with ‘found’ internet GIFs. A hoard of golden trinkets to appeal to our inner Midas. An image projection of found GIFs, collected from the internet, creates a gloriously elaborate, decorative browser-based display hosted at www.goldandglitter.net. It prompts reflections on the value of gold in an age where the value of global currencies are underpinned primarily by debt, and where digital currencies are mined through the labour of algorithms.

Also by Émilie Brout and Maxime Marion: Nakamoto (The Proof) – a video documenting the artists’ attempt to produce a fake passport of the mysterious creator of Bitcoin, Satoshi Nakamoto. Untitled SAS – a registered company with 10,000 shares that is also a work of art. SAS is the French equivalent of Corp or LTD. 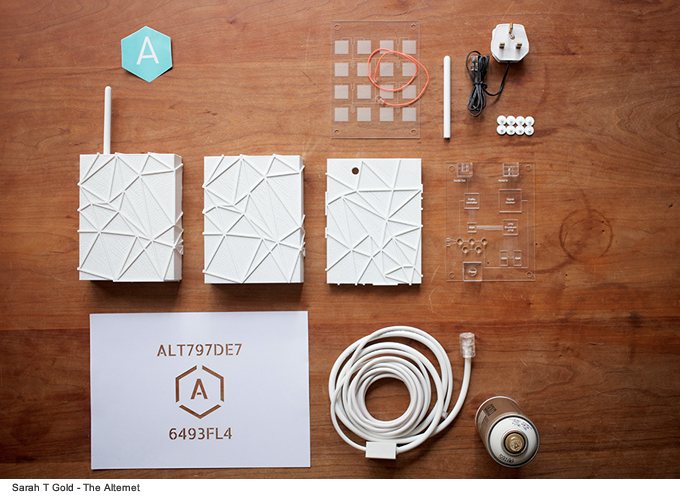 Other artworks in the exhibition:

– Jennifer Lyn Morone™ Inc reclaims ownership of personal data by turning her entire being into a corporation.

– The Museum of Contemporary Commodities by Paula Crutchlow and Dr Ian Cook treats everyday purchases as if they were our future heritage. The project is being developed with local groups in Finsbury Park in partnership with Furtherfield.

– The Alternet by Sarah T Gold conceives of a way for us to determine with whom, and on what terms, we share our data.

LAB #1
Share your Values with the Museum of Contemporary Commodities

LAB #2
Breaking the Taboo on Money and Financial Markets
Saturday 14 & Sunday 15 November, 11:00-5:00pm
A weekend of talks, exercises and hands-on activities focusing on the political/social relevance of Bitcoin, blockchains, and finance. All participants will be given some Bitcoin.

LAB #3
Building the Activist Bloomberg to Demystify High Finance
Saturday 21 & Sunday 22 November, 11:00-5:00pm
A weekend of talks, exercises and hands on activities to familiarise yourself with finance and to build an ‘activist Bloomberg terminal’.

November/February
DAOWO – DAO it With Otherscombines the innovations of Distributed Autonomous Organisations (DAO) with Furtherfield’s DIWO campaign for emancipatory networked art practices to build a commons for arts in the network age. 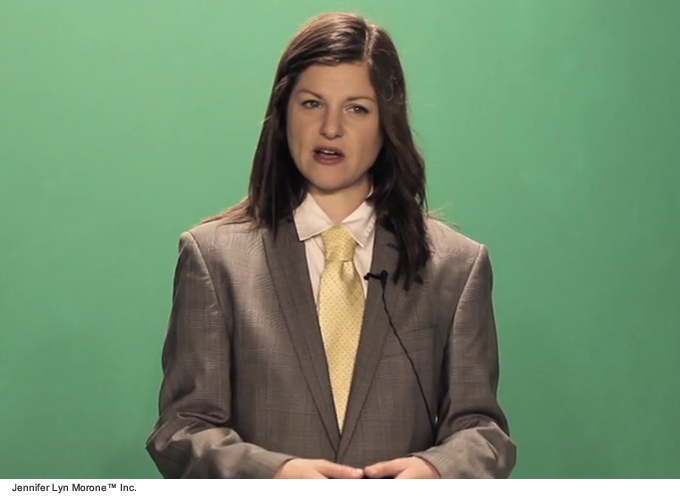 – Émilie Brout & Maxime Marion (FR) are primarily concerned with issues related to new media, the new forms that they allow and the consequences they entail on our perception and behaviour. Their work has in particular received support from the François Schneider Foundation, FRAC – Collection Aquitaine, CNC/DICRéAM and SCAM. They have been exhibited in France and Europe, in places such as the Centquatre in Paris, the Vasarely Foundation in Aix-en-Provence, the Solo Project Art Fair in Basel or the Centre pour l’Image Contemporaine in Geneva, and are represented by the 22,48 m² gallery in Paris.

– Shu Lea Cheang (TW/FR) is a multimedia artist who constructs networked installations, social interfaces and film scenarios for public participation. BRANDON, a project exploring issues of gender fusion and techno-body, was an early web-based artwork commissioned by the Guggenheim Museum (NY) in 1998.

– Dr Ian Cook (UK) is a cultural geographer of trade, researching the ways in which artists, filmmakers, activists and others try to encourage consumers to appreciate the work undertaken (and hardships often experienced) by the people who make the things we buy.

– Paula Crutchlow (UK) is an artist who uses a mix of score, script, improvisation and structured participation to focus on boundaries between the public and private, issues surrounding the construction of ‘community’, and the politics of place.

– Sarah T Gold (UK) is a designer working with emerging technologies, digital infrastructures and civic frameworks. Alternet is Sarah T Gold’s proposal for a civic network which extends from a desire to imagine, build and test future web infrastructure and digital tools for a more democratic society. 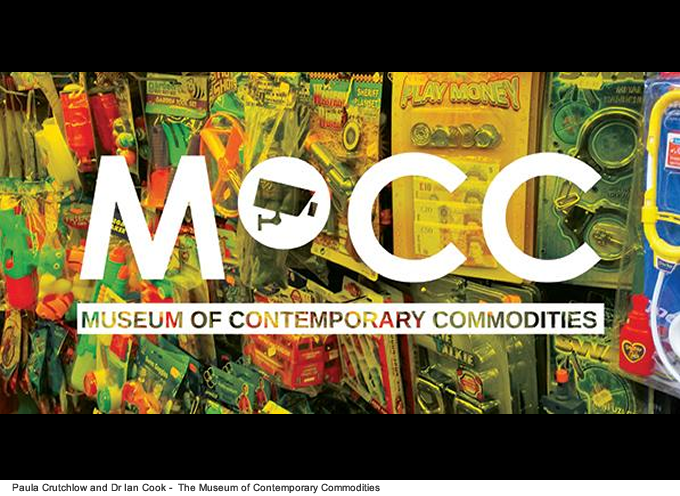 – Dan Hassan (UK) is a computer engineer active in autonomous co-operatives over the last decade; in areas of economics (Robin Hood), housing (Radical Routes), migration (No Borders) and labour (Footprint Workers). He tweets as @dan_mi_sun

– Jennifer Lyn Morone (US) founded Jennifer Lyn Morone™Inc in 2014. Since then, her mission is to establish the value of an individual in a data-driven economy and Late Capitalist society, while investigating and exposing issues of privacy, transparency, intellectual property, corporate governance, and the enabling political and legal systems.

– Rob Myers (UK) is an artist, writer and hacker based in Vancouver, Canada. His art comes from remix, hacking, and mass culture traditions, and has involved increasing amounts of computer code over time.

– Brett Scott (UK) is campaigner, former broker, and the author of The Heretic’s Guide to Global Finance: Hacking the Future of Money (Pluto Press). He blogs at suitpossum.blogspot.com and tweets as @suitpossum