The emojification of reality: interview with Carla Gannis 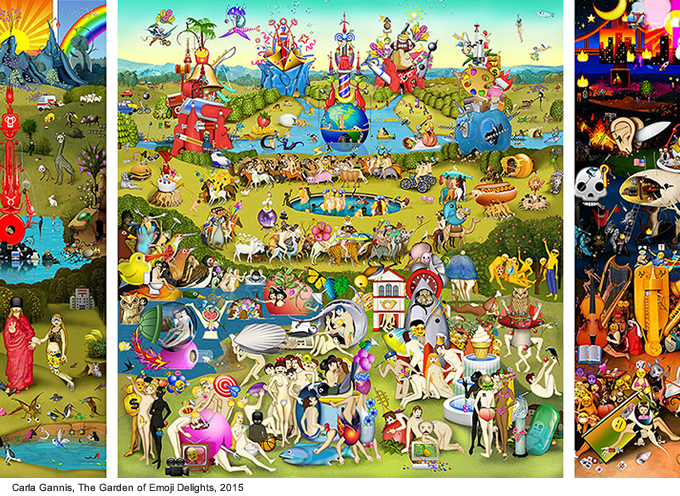 One of the first things that caught my eye when I first visited the website of New York-based artist Carla Gannis was, in addition to the colorful work The Garden of Emoji Delights (2015) which effectively introduces her style, the many icons of the various online social channels on which you can follow the updates on her life within the art world (see the photos of her travels and the development of “Carla Gannis, the artist” character).

Carla Gannis is an artist who lives and works in Brooklyn, New York. She holds a BFA in painting from the University of North Carolina at Greensboro and an MFA in painting from Boston University. She is the recipient of several awards, including a 2005 New York Foundation for the Arts (NYFA) Grant in Computer Arts, an Emerge 7 Fellowship from the Aljira Art Center, and a Chashama AREA Visual Arts Studio Award. She has exhibited in solo and group exhibitions both nationally and internationally.

Gannis is currently Assistant Chair of The Department of Digital Arts at Pratt Institute in Brooklyn, NY (https://www.pratt.edu/). Social media become both the battlefield and the field of study: online communication, chatting, colorful and disturbing interfaces are critically used by Gannis becoming the starting material for her artistic research. She is actually one of the most prolific American artists of digital art and in recent months her name has been one of the hottest in the market. 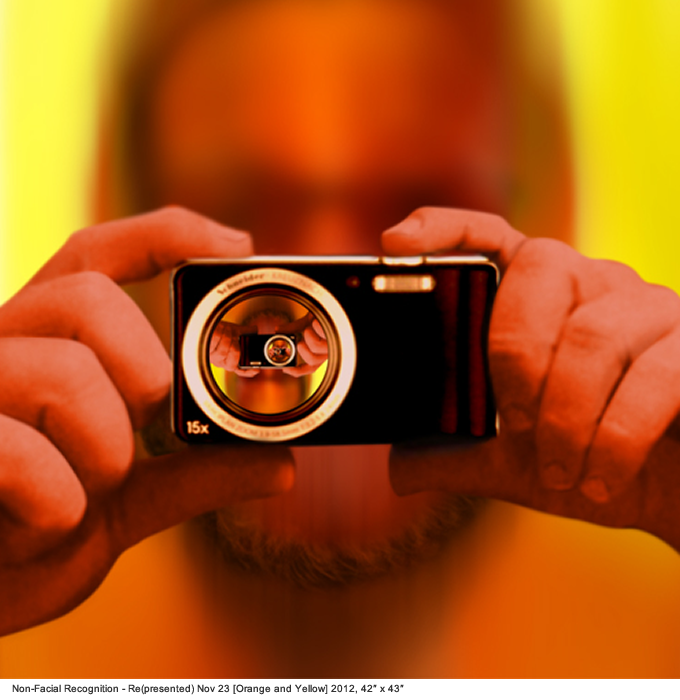 Filippo Lorenzin: How could you describe your artistic research?

Carla Gannis: My work always grows out of cultural observations, how we visually emote for example, and how we have done so in the past, and how we may do so in the future. I am fascinated by contemporary modes of digital communication, the power (and sometimes the perversity) of popular iconography, and the situation of identity in the blurring contexts of technological virtuality and biological reality. However, I would not describe what I do as a primarily research-based practice. It is more a story making process that evolves out of my appropriation, collaging, and repurposing of imagery and content.

As a visual storyteller, I narrate through a “digital looking glass” where reflections on power, sexuality, marginalization, and agency emerge. Humor and absurdity are important elements in the “telling” of my sociopolitical narratives; and image search engines, software and hardware enable me in the “showing.”

Speculative fiction writers Neal Stephenson and Marge Piercy; new media artist Lynn Hershman Leeson; cyborg activist Neil Harbission; and AI researcher and roboticist Bruce Duncan belong to a long list of prescient thinkers who inspire me to consider deeply the now and future of digital networks and biotechnological systems. Likewise, the enigmatic chimeras in the works of a 16th century artist like Hieronymus Bosch, for whom very little biographical information exists, remind me that pictorial evocations of the past can ripple out in ever expanding circles of human civilization. 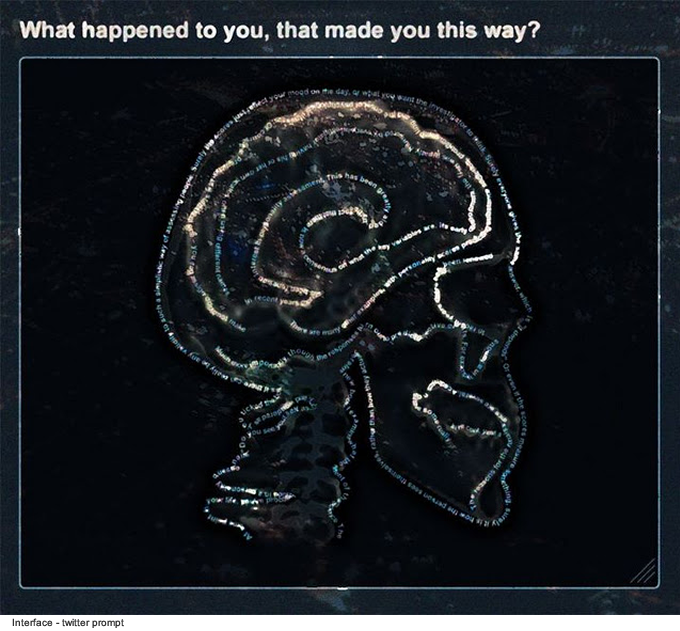 Filippo Lorenzin: Your works are quite often related to a pop imaginary which is tightly bound to Web visuals. In this regard, I’d like to know what do you think of the discussion about post-internet art and if your works can lie under the definition formulated by Karen Archey and Robin Peckham, according to which “it is consciously created in a milieu that assumes the centrality of the network, and that often takes everything from the physical bits to the social ramifications of the internet as fodder”.

Carla Gannis: There definitely is a pop aesthetic in my work, much of which streams from my Google searches and social media observations, etc…, i.e. web 2.0 culture. I’d agree themes emerging in my work are, in a way, aligned with Archey and Peckham’s formulation of post-internet. However, I don’t refer to myself as a post-internet artist. I didn’t come up with the generation of artists who first adopted the term, so to me it seems a matter of contextual framing that I don’t specifically fit within. Recently I find the “movement” or “classification” has become a catch all for anyone using the internet as fodder for their practice which expands or dilutes the term, depending on your point of view. I’ll also add that as much as I depend on the internet and find source material from the “hive mind,” its centrality, as what I’d hoped would be an agent for change, for social justice and a more egalitarian culture, hasn’t come to pass, and with its corporatization, doesn’t seem to be headed that way.

Filippo Lorenzin: What is the role of artists in an epoch like now in which everyone can create, modify and spread images without any constraints?

Carla Gannis: This is such an excellent question, and one I think about quite a bit. I’m very interested in the ability of an artwork to resonate. We, meaning those on the planet who are connected to the internet, (from 2014 statistics, 42.3% of the world’s population), take in such a steady stream of images and information at such a rapid pace, that even though a large percentage of people can easily produce and immediately share imagery, how much of this output “sticks” with us? How much of the imagery that belongs to the “like economy” makes a significant impact on our consciousness; compels us to return and look or play or experience the work again; or offers a new perspective on humanity, or life on the planet, that we hadn’t thought of before?

Resonance relies on the viewer and the complexity of his or her interaction with an artist’s work. It is not something that an artist can really control, whether his or her work will resonate, will appeal to someone else in a deep and personal way. However, I think 21st century artists can challenge themselves to produce work that has enough distance from, or reformulation of the “main stream of images” that we see daily, to challenge viewers perceptions and expectations of what the “constant upload” can reveal.

I also think today the role of the artist includes distilling and parsing data (whether its images, gifs, text, code, etc…) in an unprecedented way. We catalog, select and remix, trying to find metaphor and meaning in our production of more and more hybrid forms. It is not as much about singular creation as multi-layered recreation, through a selective and transcriptive process. I find that many of the most compelling contemporary artworks provide a complex through line to their content, the artist creates a path, albeit circuitous, that we can feel, not just scroll and click our way through.

Filippo Lorenzin: One of your new works is The Garden of Emoji Delights. I’m interested in the fact that Bruegel‘s work is getting a lot of attention by artists interested in digital issues. Could you please describe this project and how it was born?

Carla Gannis: My work has often been full of art historical references. I mix works from the “Canon” with contemporary imagery, sometimes as parody, sometimes as a reflection of human tendencies, ideologies, or societal constructions that have ultimately not changed for centuries. And then again, sometimes my mashups speak to what has changed culturally as a result of our Digital Revolution.

Here’s a funny drawing from several years ago entitled “The Smiths Find Paradise” where a part of Bosch’s The Garden of Earthly Delights becomes an alternate universe for this family to defend and perhaps capitalize on, like a circus attraction.

Regarding Emoji, they had begun to emerge in my work in 2012, but always collaged with an assortment of other images and cultural references. The Emoji weren’t the primary focus in any of the works. In December of 2013, Zoë Salditch & Julia Kaganskiy curated the “Emoji Art & Design Show” at Eyebeam Art+Technology Center in New York. They put out a call for artists, and I decided I wanted to submit something, but thought I needed to push the Emoji iconography more in a new piece that specifically examined what kind of stories could be told with this highly popular contemporary glyph system. 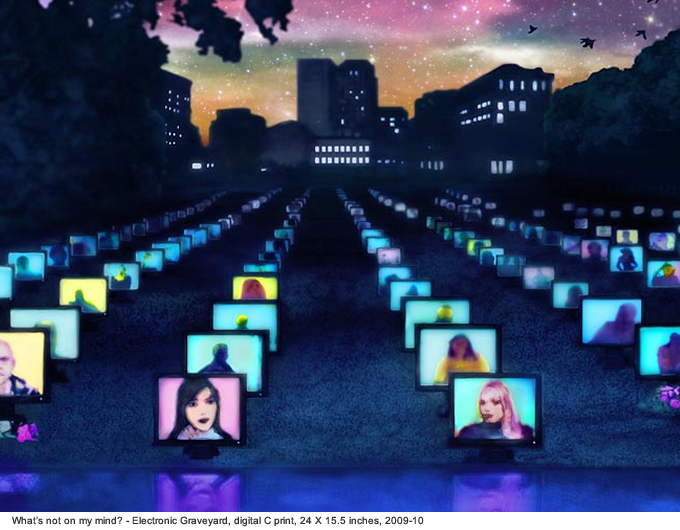 So I sat down at my computer, thought about what I’d like to produce, and after 5 minutes, like an animated Emoji light bulb turning on, I decided Hieronymus Bosch’s The Garden of Earthly Delights, with its broad cultural appeal (like Emoji), was a work that I wanted to transcribe, to “emojify.” Although the triptych ranks as one of my personal favorite artworks of all time, I only know it through reproductions, making it as virtual in a sense as the Emoji characters I used.

I produced a small digital print version of Bosch’s hell panel from the triptych for the Eyebeam exhibition, and then spent the next year of my life, with the studio assistance of Rafia Santana, producing a 13ft x 7ft digital print that re-imagined Bosch’s entire triptych as The Garden of Emoji Delights. I also produced an animated version of the triptych as well as 12 video vignettes, a number of animated gifs, a humorous Bosch Emojification prototype app, and a 3D printed sculpture that I worked on in collaboration with artist Everett Kane.

In terms of Bosch’s relevance to artists who are exploring networked culture and digital life, personally as one engaged in this practice, I’m fascinated by The Garden’s… resonance with contemporary viewers. Bosch’s depictions of a sprawling humankind engaged in folly, vice and debauchery align, even in symbology, with many of our own fascinations and concerns culturally in the 21st century. Even though the painting is a triptych to be read left to right, there is so much imagery in each panel, your eye scrolls down the painting top to bottom and back. To me the work feels “hyper mediated,” filled with an overwhelming amount of content. I really enjoyed transcribing into a contemporary visual sign system all of the different clusters of figures that provide unique and darkly humorous narratives. 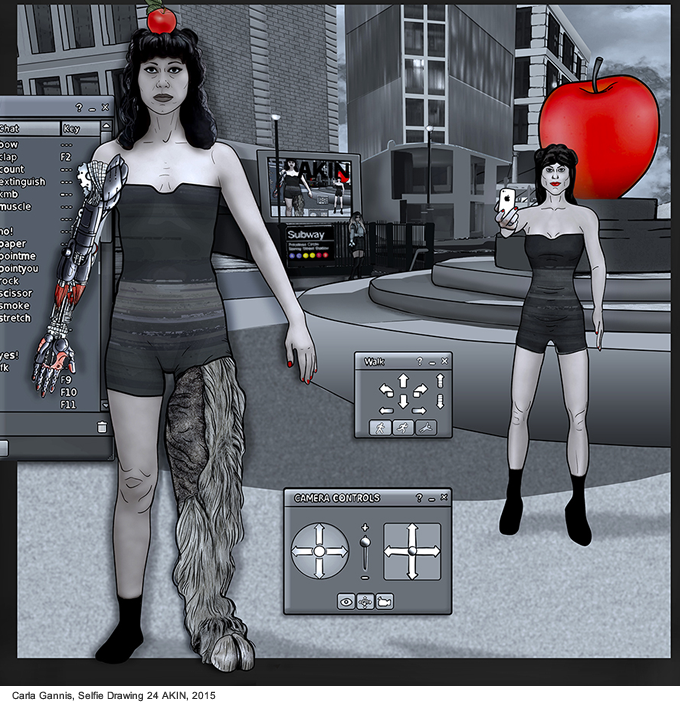 Filippo Lorenzin: What are your projects for the future?

Carla Gannis: The Selfie Drawings series, that I began this January, is one of my current projects. I am making digital drawings of “selfies,” with a graphic novel like aesthetic, and sharing them, in serialized form across various social media platforms. Unlike the immediate action of selfie photography, I’m “re-representing” myself, a mediated self, reflexively through a slow, more traditional act of drawing. In the last few works, the environments in which I’m juxtaposing myself with technology, or “as technology” have become more elaborate, and I am emphasizing identity performance in relation to our constant uploads of “self” via social media platforms.

There are narratives, albeit nonlinear, beginning to emerge regarding issues of surveillance, branded identity, age/body estimation, and agency online. I am fascinated by modes of virtual communication and ways in which these new modes collide with more historical forms of expression, revealing both constancy and change in human nature. Ultimately these selfies are not about myself, but “the self” residing in a still gender charged networked culture of hyper mediation, augmented reality and environmental uncertainty. 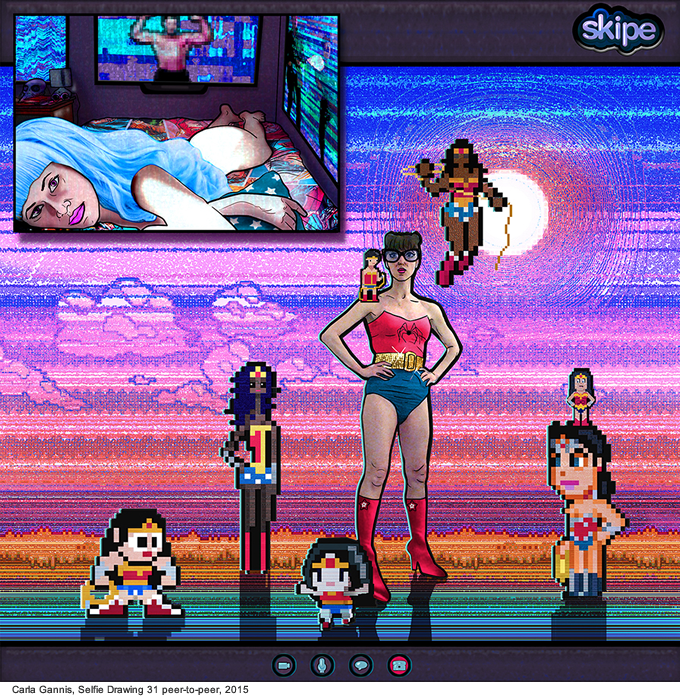 And speaking of the future, a Hopes&Fears article I recently contributed images for was “The near and far future of emoji,” where language technologists developers, and digital media scholars were asked to forecast the ever-changing world of Emoji. You can check out my images and animated gifs here.