The discreet charm of technology 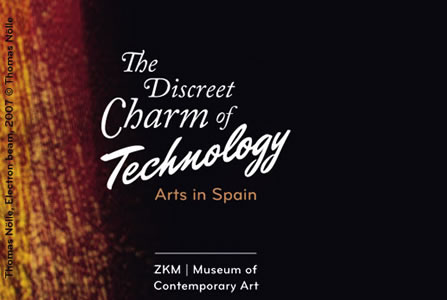 The consolidation of arts that use audiovisual, computer, digital or telematic techniques is a fact. But, the impact of technology in visual arts goes beyond its mere use as a tool. The exhibited works do not have necessarily a technological support, but they are indeed based on innovating proposals that support their approach on technique and science. Painting, sculpture and photography coexist with interactive installations, experimental cinema, video and Internet.

The first section, Acting on the formal code, addresses the formalization of language proposed, in a pioneering way, by the medieval philosopher from Majorca Ramon Llull (13th century), who created binary combinatory rules in order to achieve an universal language. On this basis, six centuries later, digital computers, automation, artificial
intelligence and cybernetics were developed. Artists such as Barbadillo and Alexanco, pioneers in computer art in Spain, have been able to implement the combinatorial analysis and the generative system to their works. More recently, Leandre or Marino, are continuing that research path.

The second section, Acting on the visual code, includes books and micro-photographs of the famous scientist and Nobel prize, Santiago Ramón y Cajal, which allowed to visualize what was invisible, thus modifying the perception of our immediate environment. New vision and action fields are researched by artists such as Daniel Canogar and
Moisés Mañas.

Taking as a starting point the pioneer works of experimental movies by José Val del Omar, the third module, Acting on the sensorial [space-time] code, analyses the media capacity to overflow the traditional limits of space, time and senses. The installations by Eugènia Balcells and Pedro Garhel, among others, offer the viewer pluri-sensorial and immersive experiences. 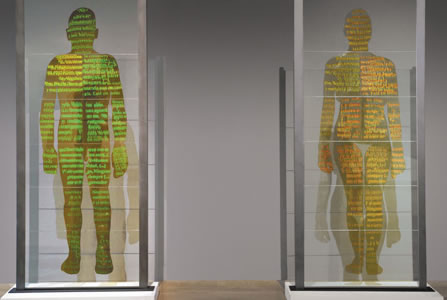 The body as interface and the way the concept of identity is built are some of the issues addressed in the section Acting on the body interface, in which works by Pilar Albarracín, Marcel·lí Antúnez, Javier Codesal and Begoña Vicario are presented. The body becomes a surface to explore the individual as a perishable being, as well as an instrument for the relation with society and also to question the traditional concepts of genre.

Reality is a subjective perception, as addressed in the last module of the show Acting on the reality interface, which depends on how the subject is observed. Technical means allow us to show the coincidence between fiction and reality. In this section, the artists question, in a critical way, the relations between the subject and the reality of social environment. Pioneers such as Miralda, Montes-Baquer/Salvador Dalí or Fontcuberta, as well as artists of the last generation, such as Cajaraville, Marino, Ruiz de Infante o Valldosera, present proposals of special interest stressing this far-reaching issue.