The Arts Catalyst Eye of the storm 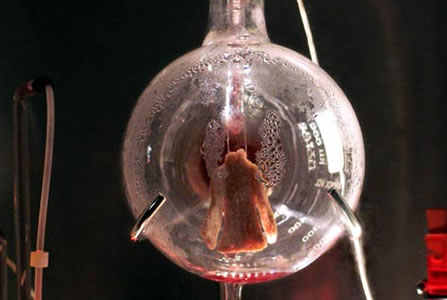 The Arts Catalyst and Tate Britain present Eye of the Storm at Tate Britain on 19 and 20 June , exploring new research and hot issues in science and society. From esoteric arguments over the structure of the universe to highly charged public controversies around the use of stem cells, Eye of the Storm brings together artists whose work playfully and provocatively intervenes in science, scientists at the heart of scientific disputes and other experts to discuss the nature and process of controversy, touching on brilliance and ego, dissent and obsession, big science, high finance, deviant science, the reliability of knowledge and the legislation of uncertainty.

Nature today is replete with invisible, elusive, fearful, yet wholly “real” entities revealed to us by science: acid rain, ozone depletion, climate change, species loss. Curiously, despite the alleged universality of science, these scientific constructions of nature are among the most frequent focal points for contemporary social controversies. How does contemporary art and visual culture complement, complicate, and render more or less controversial the objects and processes made known by science?

In the 11 years since our first Eye of the Storm conference, The Arts Catalyst has curated an invigorating series of commissions, exhibitions and events to widen the conversation about ecology, genetics and our knowledge of the universe.

Now The Arts Catalyst has been invited by Tate Britain to revisit how artists, scientists and social scientists are responding to contemporary concerns.

The Eye of the Storm two-day programme at Tate Britain opens with a keynote address by Professor Sheila Jasanoff of Harvard University, one of the major voices in science and technology studies, who calls for a new humility in science and technology. The American pioneers of environmental art, Helen and Newton Mayer Harrison, will describe their recent work, The Force Majeure, 2008-2009, which highlights how ill-equipped we are to meet a future shaped by global warming. While bio-artist Eduardo Kac will chronicle his transgenic hybrid creations, which have generated controversy since he first persuaded French geneticists to produce a rabbit, GFP Bunny, 2000 , that glows in the dark, and include Natural History of the Enigma, 2003-8, currently on display at the Weisman Art Museum, Minneapolis, a transgenic human-plant cross. 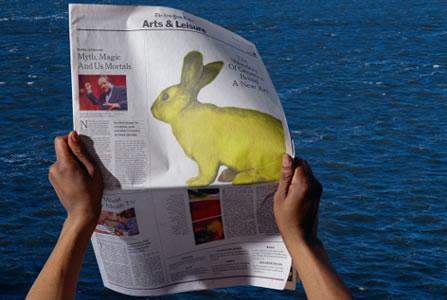 The astonishingly inventive Adam Zaretsky will express his concern that cloned animal breeders may not have adequate art schooling in the principles of aesthetics for contemporary breeding of gastronomic novelty. The infamous crop circler, Rod Dickinson, will present his powerful re-enactments of scientific experiments, which explore mechanisms underpinning systems of belief and social control.

And Oron Catts pioneer in the use of bioscience as a medium for artistic expression and Director of SymbioticA, the Centre of Excellence in Biological Arts at the School of Anatomy and Human Biology, University of Western Australia, will present his findings about regenerative bodies.

Eye of the Storm is a collaboration between The Arts Catalyst and Tate Britain in association with Leonardo/OLATS. The conference brings together the expertise of London-based commissioning agency, The Arts Catalyst , whose new art experimentally and critically engages with science to produce playful, risk-taking projects, with Tate Britain’s mission of presenting new research and debates within visual culture into the area of contemporary interrelationships between art, science and society.