The energy transition, considered as a necessary breakthrough that cannot be any longer procrastinated, involves a process of technological, productive, political and cultural change towards new forms of social and productive organization. This process, which began in a critical and experimental way in the 70s and continued in the 90s of the twentieth century, is now accelerating mainly because of strong growth of developing countries that have globally increased the consumption of energy reserves.

Energy production and use today requires new visions for its contextualization and integration into life places. It is therefore possible to analyze urban regeneration practices as opportunities to contain the necessary energy, to recover the identity of places and to relocate the production sites.

With regard to energy issues, the construction industry plays a key role. Two-thirds of the world’s total energy consumption is attributable to cities that, with an area of only 2%, are responsible for around 75% of world resource consumption (Pacione, 2009). Urban regeneration in an energetic point of view is therefore an important issue in the practice of urban planning and can in any case be understood as a policy for the sustainable development of cities. 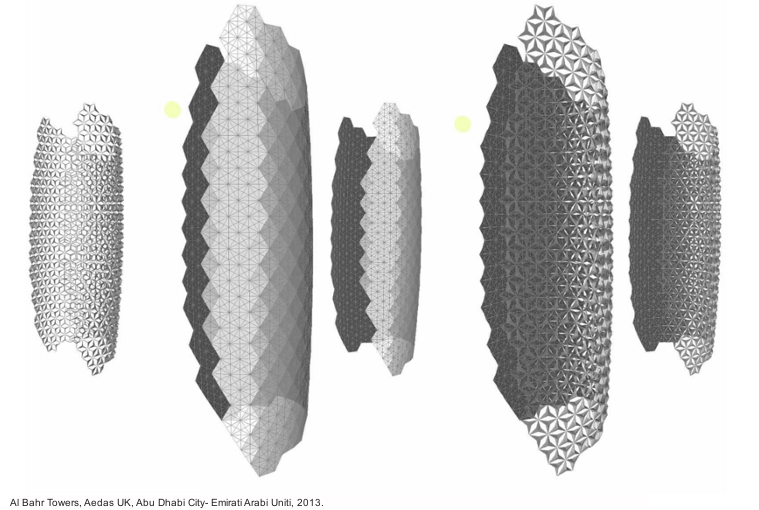 According to Ezio Manzini: “The contemporary metropolis now seems to be a saturated habitat. And since there is no more an empty “elsewhere” to colonize, we know that every idea of the future, any proposed development, will only be a reorganization of what we find in it today. In other words: every image that we can get about the habitats of tomorrow is, more than ever, conditioned by what was done yesterday, by what we have defined as the “prior factors” in the definition of habitat. The idea (completely abstract, but which has strongly influenced the collective imagination) of the Enlightenment engineer who designs from scratch the ideal city must be replaced by that of the bricoleur who uses (in a creative way, if he is able) what is there; decontextualizing it and giving it new meanings and new features.” (Manzini, 1997)

In urban areas, energy has increasingly to become organized in a diffused and complex way; in a way capable of promoting cogeneration and democratization of production. Regarding the new systems of supply, storage, transformation and use of energy and in relation to the smart technologies that will govern, the city is transforming itself from a problematic place to a place of production and sharing; place of action of the so-called “Internet of energy”.

The city is required to become a “meaningful”, “intelligent” and autopoietic system. This results in the need for radical change in the design of energy production sites (which so have to become shared, responsive, open, socially accepted, low risk, multifunctional, regenerative and non-invasive).

The relocation of energy production can also enhance the local resilience level against the potentially harmful effects of fossil fuel unavailability, and it can help reduce the carbon dioxide content introduced by communities. Innovations for a regenerated and energy-self-sustaining environment can take place on three levels/scale of intervention. 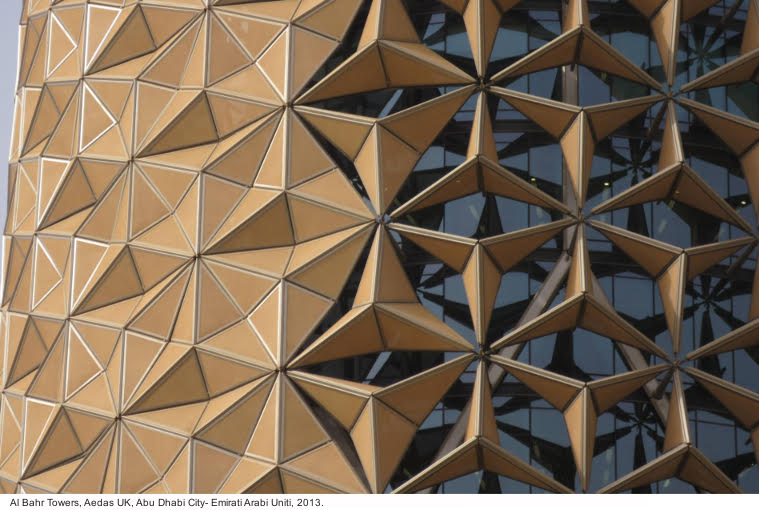 The architectural “skin” between technological and typological innovation.

The functions of the tegumentary systems are numerous: insulation, covering, protection, sensory activity, communication, filtration and then mediation between inside and outside. Architectural “skin” is today, thanks to the new technologies, a bio-inspired and dynamic apparatus capable of emulating the sophisticated functions of natural integuments.Devices that are capable of reacting to external stimuli and incorporating complex processes in an interactive and automatic way.

These capabilities can be gained thanks to innovations in the fields of materials science and digital technologies that today allow, thanks to interventions that affect also the nanometric scale, the maximum degree of integration between surfaces and technologies. The “wall” is no more considered a static cladding, but a sensory and responsive surface, a place for continuous transformation, an instrument for energy efficiency.

The directions of the development of the technologies, materials and processes innovation for energy sustainability are numerous and complementary. These researches can deal with performances of new buildings, the lifecycle of the construction products, the reduction of the quantities and of the level of danger of materials needed, the introduction of new materials and technologies with better features, reliability over time, the spread of the research results through the progressive reduction of costs, the introduction of calculation methods, the development of the contexts and the maximum grade of integration of energy technologies, the storage and the diffusion of energy produced with different systems, the eco-efficiency conceived as a general reduction of energy needs. 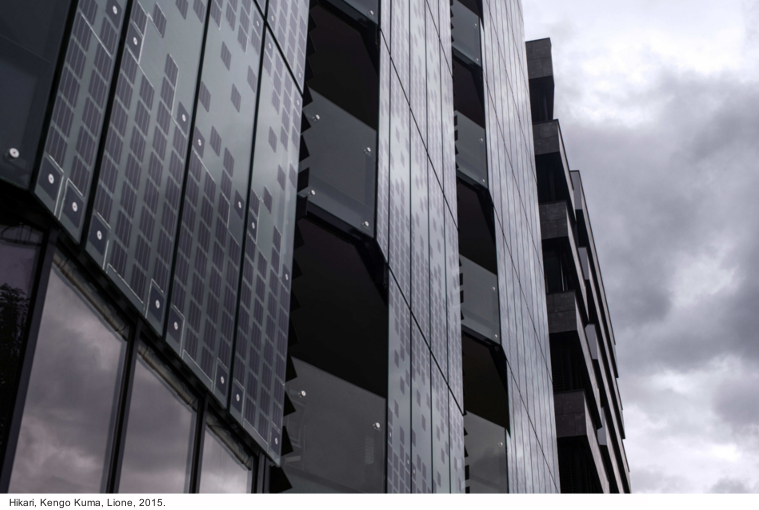 With respect to these objectives, it is possible to organize the research in these fields through experiences which adopt passive technologies (capable of responding to the energy needs of buildings with solutions aimed to needs reduction, to thermoregulation and isolation) and active technologies (which integrate devices for energy production).

The first group includes experiments that offer solutions for walls capable of adapting themselves to external climatic conditions, then modifying their structure automatically in order to optimize indoor conditions (sunshine, temperature, ventilation). One of the first examples in this direction is the south facade of the Institut du Monde Arab, inaugurated in Paris in 1987 and designed by Jean Nouvel, Pierre Soria, Gilbert Lezénés and Architecture Studio.

The facade consists of a regular grid on which dynamic diaphragms are installed. Specific photocells, in reference to the external brightness conditions, provide aperture inputs to the system components allowing them to react as photographic lenses, thereby creating optimal lighting and indoor ventilation conditions.

A more recent example is the Quadracci Pavilion designed by Santiago Calatrava in 2001 as an additional pavilion to the Milwaukee Art Museum. The building casing consists of 72 metal ribs that open up to a maximum height of 60 meters. With a slow “beating of wings” the enormous structure acts as a shielding and thermoregulation element opening in the daytime to allow it to penetrate the sunlight and thereby passively heat the indoor environments, while during nights or rainy days it closes as a shell in order to protect the building.

A similar case study is the Theme Pavilion Expo Yeosu designed by the Viennese Soma Architecture in Yeosu (Korea) in 2012. The main facade, consisting of kinetic lamellae, thanks to a constant adaptation to climatic conditions, provides energy saving and regulation of direct light input. 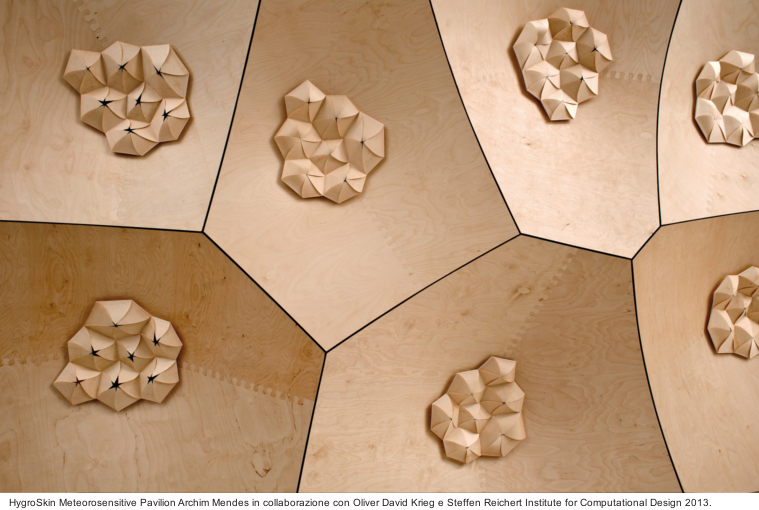 Archim Menges‘s research is working in the same research direction. In 2013, in collaboration with Oliver David Krieg and Steffen Reichert, Menges designed HygroSkin Meteorosensitive Pavilion for the Stuttgart Institute of Design and Construction. The structure of the wooden fiber walls, inspired by the pattern of pine cone’s opening, varies with the humidity conditions of the environment. A similar concept was developed by the AEDAS design company for the implementation of the dynamic shading system of Al Bahr Towers built in Abu Dhabi City.

There are also case studies involving the use of active technologies, ie capable of generating electrical or thermal energy by exploiting facades as multifunctional surfaces for energy collection. An example of this is Kengo Kuma‘s Hikari project, which was completed in Lyon in 2015. Photovoltaic cells have been integrated into the transparent facade surfaces to form a pattern capable of generating energy as well as providing a shadow to the indoor environments.

An avant-garde example is the BIQ house built in the IBA experimental district in Hamburg (Germany). The intelligent system is able to simultaneously supply biomass and thermal energy, bringing the need of energy of the building near zero. The glazed facade is made up of a series of microalgae bioreactors that, by activating the photosynthesis process, produce biomass and thermal energy to power the building.

Direct sun exposure accelerates the algae proliferation process, which increases the amount of energy produced and creates a natural insulating layer between the indoor and the outdoor, so working as a natural shading system. 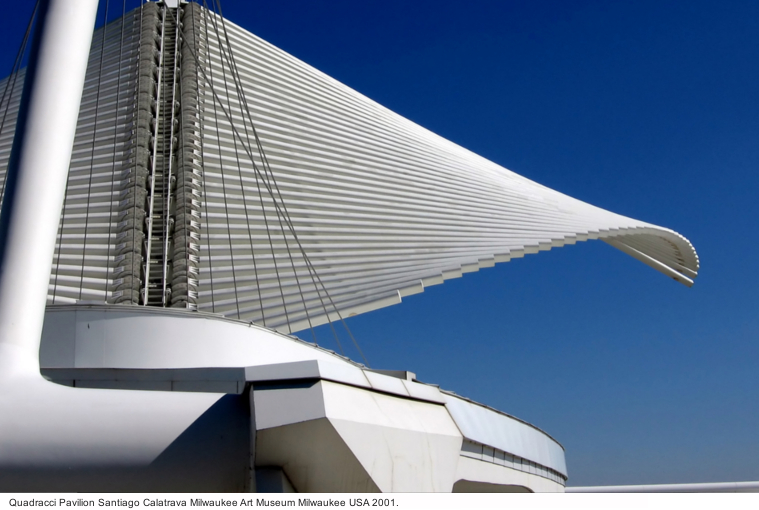 There are also experimental projects that propose the integration of energy production systems (thermal, piezoelectric or photovoltaic) into horizontal surfaces (floorings). It is a research direction that poses objective criticalities about productivity, but which has the greatest advantage on the level of integration with the context.

In 2008 Daan Roosegaarde finalizes the SDF (Sustainable Dance Floor) project for the Watt Club in Rotterdam (Netherlands). It is a piezoelectric modular flooring capable of generating electricity from the vibrations caused by the dance of the disco enthusiasts.

Among the experiments active in this development line can be cited Scott-Brusaw‘s American SolarRoadWays project and the SolaRoad project, inaugurated in 2014 in Krommwnie, near Amsterdam; an experimental project of photovoltaic cycle track developed by the research institute TNO in consortium with Ooms and Imtech.

It is a modular prefabricated path in which solar cells have been inserted, all the system is then covered in tempered non-slip glass. The generated energy could fuel road lighting, or recharge the batteries of the electric bicycles. The project presents several functional problems (captured light will undoubtedly be inferior to that absorbed by conventional photovoltaic modules, a difference of 30% is estimated), but opens a new way of conceiving linear, shared and totally integrated photovoltaic plants.

Both in the case of passive or active systems, the new challenges for research relate to a new definition of the relationship between architecture, energy and movement and the adoption of new digital technologies that, by using more and more sophisticated sensors, allow buildings to communicate with the place and so optimize their energy requirements. 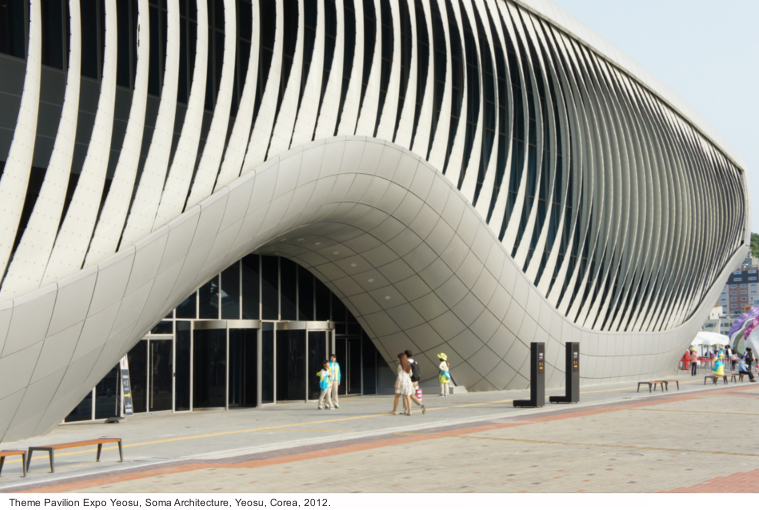 In both cases, design challenges focus on obtaining surfaces that are capable of being integrated into contexts, be programmed or, better, ba able to self-organize and thus adapt to external stimuli and generally to possible mutations in environmental conditions. These challenges require renewed synergies between the disciplines of Architecture, ICT and Industrial Design.

The technological surface as an architectural component has to be considered as a critical theme, a field of experimentation and technological transfer for the development of material and typological innovations.