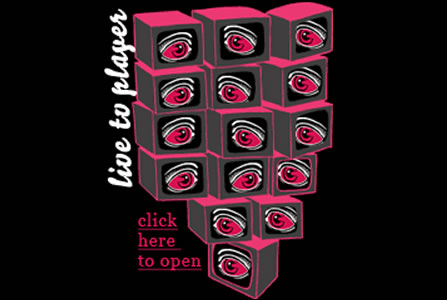 TEA TIME TV, a series of guest interventions, talks, workshops and telepresentations, will be presented by V2-Centre for unstable media at Witte de With as part of the Satellite of Love exhibition and the 35th International Film Festival Rotterdam Exploding Television program.

These Tea Time TV series focus on artist and activist interventions with television. Tetsuo Kogawa will take a rare break from his primary love  radio  to lead a “Build your own TV” workshop. Artists Geert Mul, Perry Bard, and The Yes Men will discuss the fragile connection between representation and truth in broadcast culture. Focusing on artist and activist interventions with television, the Tea Time TV sessions are online streamed events, each afternoon in the Auditorium (2nd floor) of Witte de With during IFFR. In addition to Tea Time TV, Satellite of Love hosts TV dinners with warm meals and elaborate screening programs.

SILENT_TV will be a telematic workshop with Tetsuo Kogawa (Tokyo Keizai University) and Adam Hyde (r a d i o q u a l i a) on how to build your own tv. By building transmitters the workshop participants inevitably deconstruct broadcasting, challenging their own notions of what broadcasting is now and what it could be. Registration for this workshop via < info@v2.nl > is necessary as there will be a limited number of places available. All parts and tools provided gratis.

GATED_TV will deal with copy right issues vs open archives, open source, open archives. What new potential does digital television usher in for the creative viewer? If viewing behavior can be monitored and recording severely restricted, who ends up watching whom  is this genuinely an issue restricted to merely upholding a lexicon of copyrights? With Cory Doctorow (Electronic Frontier Foundation), Juha Huuskonen (Pixelache), Jennifer Rigby (BBC Creative Archive), Syb Groeneveld (Creative Commons Netherlands), Rachel Baker (Ambienttv.net and Arts Council of England), and others. Moderated by Christiaan Alberdingk Thijm (IP Lawyer).

TRUTH_TV will bring together several artists to discuss their work exploring the nature of truth as represented by television. With Geert Mul (artist), Perry Bard (artist), and The Yes Men (culture jammers). Moderated by Stephen Kovats (V2_, Institute for the Unstable Media).

DISH_TV will deal with satellites and the constellations around global television. How can the artist challenge the already ubiquitously innocuous technology and its accompanying baggage of eidetic imagery? DISH_TV will dive into the question of satellites and the constellations around global television, with Mark Bain (simulux), Menno Grootveld (Rabotnik TV), Mauzz (DDS), Ewen Chardronnet  (elipse). Moderated by Adam Hyde (r a d i o q u a l i a).