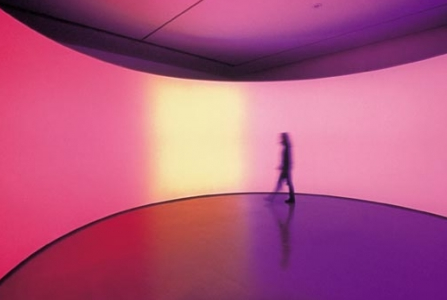 This summer the Museum of Contemporary Art, Sydney presents the first large-scale exhibition of works by Danish-Icelandic artist Olafur Eliasson in Australia. The exhibition, entitled Take your time: Olafur Eliasson, runs at the MCA Sydney exclusively in Australia from 10 December 2009 to 11 April 2010.

Olafur Eliasson is among the most influential and widely acclaimed artists of his generation. From light-filled environments to walk-in kaleidoscopes, Olafur Eliasson’s unique participatory works offer alluring spaces that harness optical cognition and meteorological elements, examine the intersection of nature and science, and explore the boundary between the organic and the artificial.

Having been raised partly in Iceland, Eliasson’s practice is informed by that country’s landscape and spectacular weather. He recontextualises elements such as light, water, ice, fog, arctic moss, and lava rock to create altogether new circumstances that shift the viewer’s consciousness and sense of place. By extension, his work prompts an intensive engagement with the world and a fresh consideration of everyday life.

Take your time: Olafur Eliasson gathers works from major public and private collections worldwide and spans Eliasson’s diverse range of artistic production from 1993 to the present, including installations, large-scale environments, sculpture, and photography. 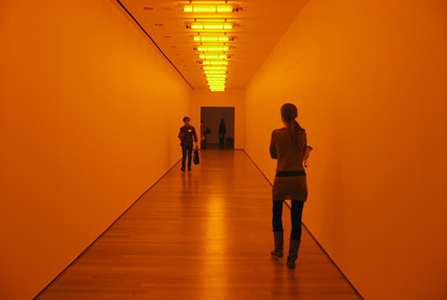 The exhibition has been organised by the San Francisco Museum of Modern Art (SFMOMA) and curated by Madeleine Grynsztejn, Pritzker Director, Museum of Contemporary Art, Chicago (and SFMOMA’s former Elise S. Haas Senior Curator of Painting and Sculpture), in close collaboration with the artist.

MCA Director Elizabeth Ann Macgregor says: “Eliasson is emerging as a singularly influential artist on the world stage and we are proud to be able to present this major exhibition of his work to Australian audiences. We are delighted to have been able to work with one of the world’s most prestigious arts institutions SFMOMA, to make this extraordinary exhibition happen and we expect it to be hugely popular both with existing and new audiences for the Museum. As we are the only Australian venue presenting this show, we hope to attract visitors from interstate and overseas.”

To contextualise the exhibition and provide audiences with insight into the work of the artist, the MCA has launched a microsite devoted to Take your time: Olafur Eliasson. Located at http://www.eliasson.com.au, the site has been produced in partnership with Two Thousand and designed by Karl Maier of Rinzen.

Take your time: Olafur Eliasson is accompanied by an extensive catalogue, edited by Madeleine Grynsztejn and published by Thames & Hudson which explores Eliasson’s practice and its critical context. The exhibition opened at SFMOMA in 2007 and has since toured to the following venues throughout the United States, The Museum of Modern Art (MOMA), New York, and P.S.1 Contemporary Art Centre, New York, Dallas Museum of Art and Museum of Contemporary Art, Chicago.