Superficial Hygiene. The mediated image and the physical body 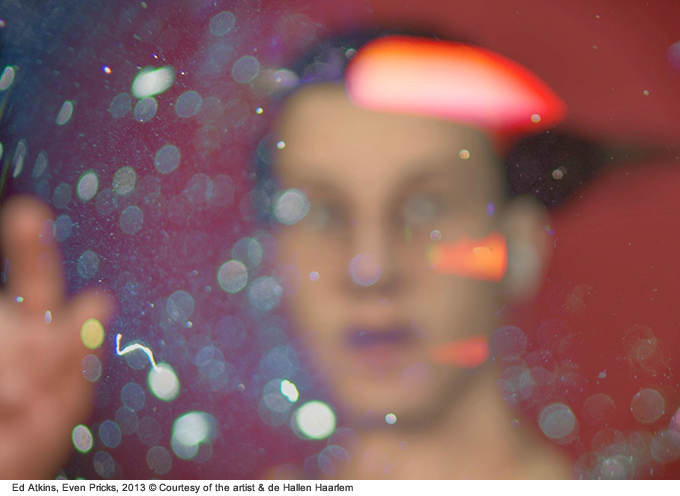 The international group exhibition Superficial Hygiene brings together a set of practices of a gen­eration of artists, who adapt, mould, and corrupt the grammar of our contemporary accelerated en­vironment, in order to propose a new understand­ing of the relation between the mediated image and the physical body. Coming from various artistic trajectories, and employing a variety of media, these artists share a common interest in the sur­face as a site for conflict and desire. The polished seamlessness and increasing virtualization of our daily surroundings have complicated our relation with the material world of objects and things. The works in Superficial Hygiene both celebrate and critically reflect on our changing physical and psy­chological relation to materiality and substance.

Superficial Hygiene is bookended by two works from the collection of De Hallen Haarlem: a series of physically and digitally manipulated prints by Erik van Lieshout & Kelley Walker, from their collaborative exhibition I am scared of America at De Hallen Haarlem in 2007; and the 2012 video installation The Woolworth’s Choir of 1979 by Elizabeth Price. In diverging ways, the relationship between surface and substance, between repre­ sentation and the body, is negotiated in these works. How do you relate to an image that is in­ creasingly thin, endlessly reproducible, and no longer supported by a physical body? What hap­ pens when you tinker with the contemporary image surface, and try to touch what is underneath?

The exhibition traces these concerns in different media (sculpture, print, painting, video) and connects material practices to the virtual realm. Accessibility to hyper­sharp HD video, lifelike 3D­ animation, crisp surround sound, and powerful image editing soft­ware has created formal and aesthetic possibili­ties that give new impetus to our relationship with reality. The shiny seamlessness of the digital surface has brought about a new kind of realism – a realism that creates a heightened bodily awareness, both seductive and disturbing. The ubiquity and mobility of the screen, and the architecture of operating systems and software have become an internalized part of daily experience, causing a paradigmatic shift in the intuitive approach to the production of im­ages and the organization of information. 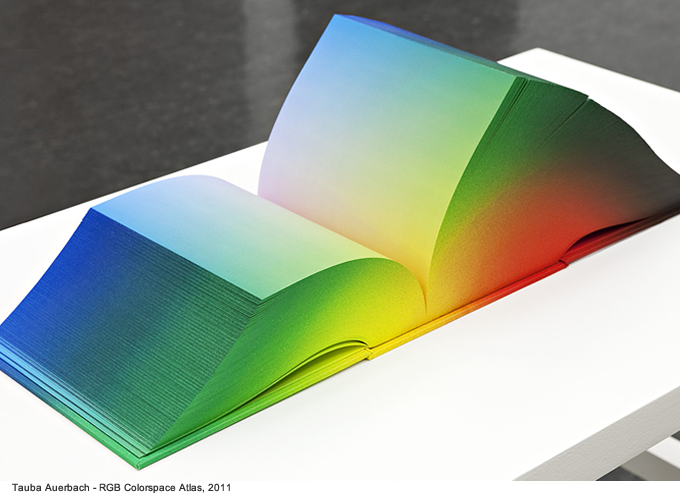 Superficial Hygiene brings together works in which these new relationships between the artificial and the real are addressed, focusing attention on the artists’ fasci­ nation for the surface as a loaded, paradoxical space.

Tauba Auerbach’s RGB Colorspace Atlas (2011) is a stunningly produced, three­dimensional spatia­ lization of the RGB colour spectrum – a triumphant material translation of a mundane digital phenome­non. Over 3,632 pages, the entire visible colour spec­trum is mapped out in three directions: red, green and blue. With her RGB Colorspace Atlas, Auerbach translates the phenomenological into the physical via the digital, and objectifies it – as if she has found the secret that allows us to touch a rainbow.

At the core of Nina Beier’s Demonstrators (2011), presented in this exhibition, lies a straightforward artistic method: the collision of digital stock pho­tography prints and generic household radiators. The flat, pictogram­like imagery of spliced rope is culled from online stock archives, and is hung out to dry on the impersonal, mass­produced object. There is an animistic suggestion of co­dependency between these two visual categories: the every­ day object in need of symbolic activation, and the dematerialized image looking for physical support – returning to a solid, if alien, body.

In Nina Beier & Simon Dybbroe Møller’s The Industrial Revolution (2013), the opposite direc­tion is taken. For this group of naturalistic hand sculptures, a number of Rodin hand sculptures (The Hand of God, The Secret, Two Hands, Hand of Pianist, The Cathedral) was replicated. Here, the body has literally fallen away, and idle, isolated gestures remain.

The sculptures Trails Rising, Trance Tracks (2012) and The Days of Aquarius (2011) by Anne de Vries are characterized by existential human themes (the passing of time, the experience of the sublime) resonating in the echo chamber of technological processes. The Days of Aquarius consists of a near­ infinitely long listing of every single day in the 2,150­ year long period of the Age of Aquarius, executed via a PHP computer code. The slender columns that make up Trails Rising, Trance Tracks are made from epoxy clay and sand, and show the imprint of ergo­nomic footwear – sacral totems inscribed with the traces of present day leisure culture. 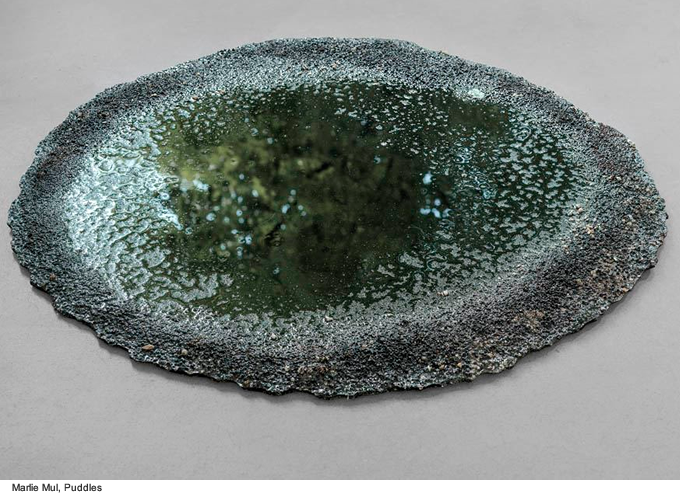 The recent series of Puddle (2013­14) sculptures by Marlie Mul elaborate on her interest in the banali­ties of public non­space. Mul employs a trompe­ l’oeil illusionism in these works, negotiating the fleeting, unstable character of natural phenomena against the solidity of the sculptural object. The Puddles are literally superficial, albeit unhygienic: impure and contaminated by the physical traces of human existence. Mirroring the reality around us, they suggest an infinite depth, an artificial sinkhole, in which all physical matter will eventually end up.

In their paintings and videos, Florian & Michael Quistrebert combine their joint interests in the corruption of digital processes with the genea­ logies of geometric abstraction and, more speci­ fically, Op Art. Rather than emulating the illusory strategies of the latter with contemporary techno­ logical perfection, they look for friction and conflict in the process of execution. In Stripes 2 (2013), the Quistrebert brothers activate and confuse genera­ tive video code native to the video­editing suite Final Cut Pro, in order to elicit complex, animated webs of Sol LeWitt­ like graphic patterns. In their paintings here on view, the struggle is in the sur­face: the purposefully material/manual execution of a digital design.

In the 3D­animation video Orchids, or a hemisphe­rical bottom (2013), Helen Marten introduces a dizzyingly layered narrative construction that al­ lows the artist to expand on ideas also present in her sculptural work. The light­footed rhythmical collision of protean visual and formal vocabular­ies that underlies Marten’s material practice is extended into the virtual sphere here, increasing its choreographic potential while eradicating its material body. The artist’s interest in linguistic slippage, and in creating friction by hybridizing conflicting modalities of object and display, is presented in a theatrical space of fluid, seductive, ultra­thin surfaces.

Similar concerns about the interplay between language and image, rhythm, and gesture, come into play in the work of Elizabeth Price. In The Woolworth’s Choir of 1979 (2012), she weaves three seemingly disconnected levels of media, technology, and information into a single narrative. Price combines HD video, 3D animation, historical archive footage of Gothic church architecture, a 1960s pop band, and an infamous fire in a department store in Manchester, into a video installation that emphatically aims at providing animmersive sensorial experience. With its intri­cate, syncopated compositions, and cinematic volume levels, Price uses the soundtrack to inten­ sify the viewer’s bodily experience. 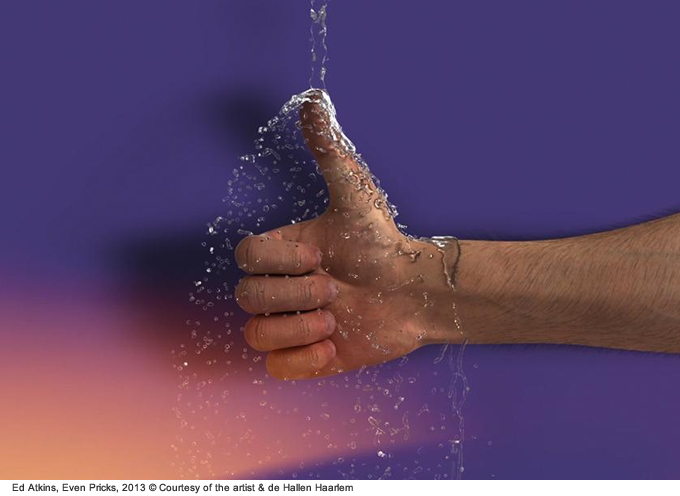 Ed Atkins is another London ­based artist who cre­ates highly realistic artificial environments using HD video, digital animation, and surround sound. In works like Even Pricks (2013), Atkins activates the paradoxical tension that lies in the incredibly realistic representation of materiality (skin, hair, body) by the essentially dematerialized technolo­gy of digital media. His videos flatten the human body, and its physical surroundings, into pure crystalline surface – so brilliantly artificial that the dark soul of absent reality is almost tangibly shimmering through its pixilation.

Erik van Lieshout & Kelley Walker’s The Kings­ series was produced as part of their collabora­ tive exhibition in De Hallen Haarlem in 2007. Van Lieshout responded to Walker’s digital prints, for which he used covers of King magazine, by physi­cally de­ and reconstructing them using a variety of collage and painting techniques. Walker sub­sequently re­sanitized their surfaces, by adding layers of tape, and re­printing the image on top. This exchange process of appropriation and re­-appropriation results in a series of stratified im­ages, in which digital weightlessness is anchored in the material sediment of manual craft.

The objects Magali Reus produces are gleaming, sterile variations on the everyday things that sur­ round us. Her sculptures resembling refrigerators, stadium seats and cooking pans are sovereign, clinical and decidedly artificial. At the same time they are also hip, cocky and seductive. Re­ suscitating the surface­fetish debate that has informed the discourse surrounding the various incarnations of Minimalism, Reus’ work also com­ ments on the awkwardness and vulnerability of the human body, by alluding to various prosthetics, supports, and aids.