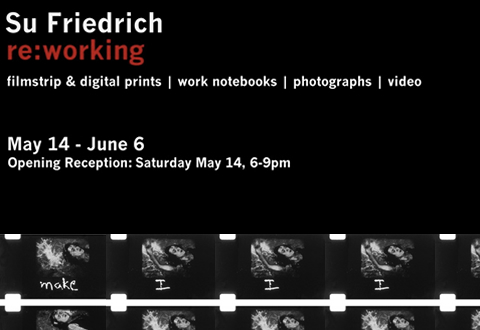 MICROSCOPE Gallery is honored to present the gallery debut of independent filmmaker Su Friedrich. With works spanning 37 years, “re:working” offers a first look at the hidden influences and art of Friedrich’s filmmaking.

Friedrich began as a photographer, and the early black and whites photos in the show reveal a developed eye already exploring the issues of sexual identity, Catholicism, the tensions between documentary & fiction and other themes she continues to deal with today. Her detailed private work journals and drawings, which she has meticulously kept for each of her films, expose not only the process behind each, but Friedrich as a poet and an artist. And with her new filmstrip prints and digital collage works Friedrich revisits her photographic roots. Beginning with footage from her films and videos, frames are reordered and rearranged into new composite images, which sometimes complement and sometimes lead to entirely new interpretations of the images in the film.

Other highlights: Friedrich’s embroidery of human organs and flowers climbing on a six-foot long vine, which she is seen stitching in her 2002 film The Odds of Recovery, and a map of Williamsburg, Brooklyn detailing the 164 construction and demolition sites she videotaped for her current work-in-progress, which deals with rapid gentrification of the neighborhood she lived in for twenty years.

A program of Friedrich’s early short b&w, silent films will be on installation and a selection of the filmmaker’s longer works related to the exhibit are also available for viewing on site.

Friedrich is a leading figure of American avant-garde film and directs, writes, shoots, edits and sometimes performs in her works. Most recently, Friedrich was one of three contemporary filmmakers featured in MoMA’s 2010 Maya Deren’s Legacy: Woman & Experimental Film. Retrospectives of her work have been held at the Museum of Modern Art, the Whitney Museum of American Art, the Rotterdam Film Festival, and the National Film Theater in London, among many others. 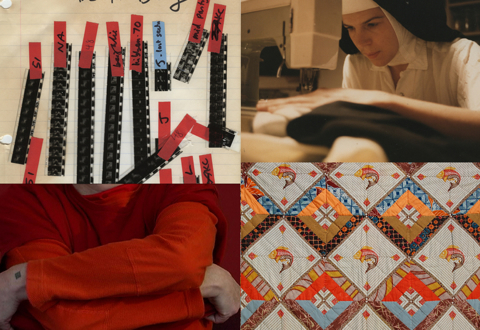 Her films have won the Grand Prix at the Melbourne Film Festival, Outstanding Documentary Award at Outfest and Best Narrative Film Award at the Athens International Film Festival. She has received Rockefeller and Guggenheim Foundation fellowships and is a recipient of the Alpert Award in the Arts. She teaches film & video production at Princeton University and currently lives and works in Brooklyn, NY.

“Since the late 1970s, Su Friedrich has skillfully mixed experimental, narrative, and documentary forms with provocative feminist and lesbian themes to create a significant body of original hybrid films. … a pivotal force in the establishment of Queer Cinema, Friedrich has created an oeuvre that is marked by her unabashed—often autobiographically based—investigations of intimate subjects.” — Sally Berger (Department of Film and Media, Museum of Modern Art, NY, 2006)