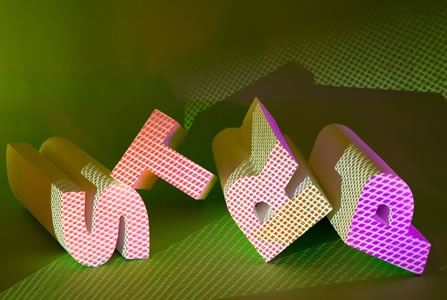 From 2 – 13 April the Klokgebouw in Eindhoven will once again be the place to find electronic music, interactive installations, film, art performances, live cinema and robotics. The STRP Festival is multidisciplinary all-out experience in which music, art and technology merge.

In addition to the previously announced and highly anticipated music programme on the main stages during the opening weekend (3 and 4 April), STRP has plenty more to offer from 8  13 April with a wide array of unique performances and art projects on tap. Some are freaky and totally out there, while others are extremely sophisticated and innovative. But as a whole the best way to describe the programme is new and different. STRP has invited artists from around the world who share a penchant and talent for blending art and technology in exciting original ways.

Art is not weird and technology is not sterile: this is the message that STRP aims to convey. Art can be a physical experience and technology makes for a wonderful toy. It causes you to look at reality from a different perspective.

What can you expect? First and foremost, a major exhibition of technological art installations: the STRP Expo, which features works including Infinite Cubed by the Brazilian duo Crescenti & Cantoni . This 3x3x3 metre cube made of moving mirrors creates the ultimate “Droste Effect” named after the optically enchanting Dutch cocoa ads. Next, try looking deep into the eyes of the Hexapod spawned by Matt Denton . This six-legged spider robot tracks you like a predator going after its prey, and instantly posts your picture on its website.

STRP Expo features dozens of amazing and largely interactive works of art that appeal to your entire body.

While there is a strong international flavour to the STRP Festival, the Netherlands is likewise well-represented. Featured Dutch artists include Daan Roosegaarde , whose work has been displayed around the world; robotics artist Freerk Wieringa; and video artist J é r ô me Siegelaer. Plus, a number of recent graduates will also be participating, including Jeroen Holthuis, Evelien Lohbeck and Paul Verhoeven.

STRP also features lots of performances in which artists incorporate technology in their act, and in some cases even expand their bodies to cyborg-like proportions. Japanese musician Suguru Goto will present a performance with two dancers in black robot suits outfitted with sensors that register their movements, translating them into visuals projected on a giant screen. Swiss performance artist Yann Marussich has a bizarre act in which he spends an hour trapped naked inside a glass cage, sweating blue liquid. Eindhoven’s own Stefan Robbers (aka Terrace) will provide the live soundtrack, which incorporates Marussich’s bodily sounds. The Cyborg Arena programme hosted by Regine Debatty from the popular weblog We-Make-Money-Not-Art.com includes a variety of these cyborg-type artists. 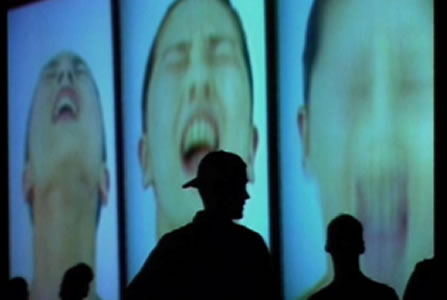 There will also be live cinema acts to see, including 10,000 Peacock Feathers in Foaming acid by the celebrated Russian duo Domnitch and Gelfand . Using lasers they turn soap bubbles into spectacular visuals in a chemical and technological tour de force.

STRP Expo + almost has too many great acts to mention here. Other participants include Robot Cowboy , who has a monitor instead of a head; Eboman, who samples his audience live; a WORM evening including a unique live performance by Jan Jelinek and Karl Kliem involving a controllable neon wand; an experimental label night presented by Enfant Terrible , with artists including Belgium’s crazy pigtailed and white knee sock-clad Kania Tieffer .

Although their work has been shown around the globe, the former duo has never had a retrospective. Eindhoven has the honour of hosting the world premiere of a Granular Synthesis retrospective. Never before has such a collection of their work been exhibited at the same time at a single site. This should come as no surprise, really, considering both the tremendous impact and size of the various installations. However, the STRP Festival is able to accommodate this ambitious project with Strijp-S, the Klokgebouw, 5MM and MU. The retrospective at the STRP Expo+ consists of four major works in and around the Klokgebouw, a dual-screen installation at the 5MinutenMuseum and a number of single screen works at MU . Most of the works have never been shown in the Netherlands or even in Europe. In addition to the installations, Hentschlaeger and Langheinrich will engage in live performances, including Modell 5, POL, Drift, and Cluster, which Hentschl ä ger developed specifically for the STRP Festival.

In 1956 Philips commissioned the renowned architect Le Corbusier to build a pavilion for the World’s Fair in Brussels. Le Corbusier wished to avoid designing yet another industrial exhibit and told Philips that he would create an “electronic poem” about the technological development of mankind. Together with composer Edgar Varèse, architect Iannis Xenakis and cinematographer Philippe Agostini, Le Corbusier developed a spectacular work of art in which light, sound, film and architecture merge to form a revolutionary multimedia spectacle. STRP will host a symposium on this remarkable cultural legacy, which was created in Eindhoven’s NatLab. Some questions are being discussed during a diverse programme on Thursday April 9 th. The symposium RE: Le Poème Électronique takes place in the so-called Klokgebouw at Strijp-S, not even a mile away from the spot where Le Poème Électronique originated. In addition to lectures, discussions, and performances, the documentary ‘Kamer 306’ is shown. Kamer 306 is a documentary about the experimental musical practices in the NatLab during 1956  1960. The symposium is part of the regular STRP Expo+, and is meant for students, researchers, artists, technologists, and everyone else interested in this unique work art.