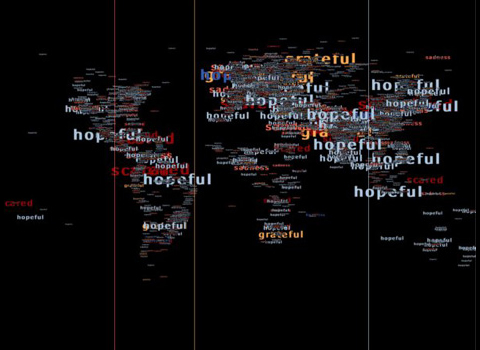 Streaming Museum, an international public art and online museum, will celebrate its fourth anniversary on January 31 with the US premiere of “Emotion Forecast” and “Occupy Wall Screens,” real-time artworks by the renowned French artist Maurice Benayoun. The exhibition will be on view for one month at Big Screen Plaza in New York City and through 2012 at StreamingMuseum.org.

The opening reception will take place from 6 to 8 pm on January 31 at the Eventi Hotel’s Bar Basque, designed by futurist Syd Mead (839 Avenue of the Americas). Guests will enjoy dramatic views of the exhibition on the big screen in the presence of Benayoun who will also give a lecture at Columbia University and Parsons the New School for Design.

“Emotion Forecast” and “Occupy Wall Screens” are part of Maurice Benayoun’s ongoing series on the “Mechanics of Emotions” which translate emotions into maps, performances, the Emotion Vending Machine, and sculpture relics of the world.

Using a system similar to the one employed in weather forecasting to measure the movement of clouds, “Mechanics of Emotion” applies data collected from search engines to map and assess emotional trends. For example, “Occupy Wall Screens” compares the emotional trends of cities active in the OWS movement to the market trend of financial stocks. 99% down, 1% up! 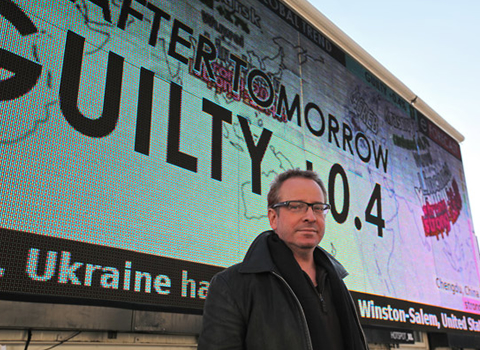 Benayoun wonders, “what would happen if economy and trade were based on the emotional state of the planet,” asking, “Shouldn’t we follow changes, major mood swings, trouble spikes of human moods as we do the weather forecast and the stock market?”

Through the “Mechanics of Emotion” art series, Benayoun explores that idea, displaying and anticipating the emotional state of the world as it undergoes major upheavals and predicting how the market will respond.  In other words, he has created a prediction service of emotional statistics.

Nina Colosi, Founder of Streaming Museum is “delighted to have the opportunity to present the first US solo exhibition of Maurice Benayoun whose social commentary and groundbreaking use of technology and the internet are relevant to the focus of Streaming Museum.”

Maurice Benayoun, born in 1957 in Mascara, Algeria, is a pioneer new-media artist and theorist based in Paris. His art employs various media, including and often combining video, immersive virtual reality, the Web, wireless technology, performance, large-scale urban art installations and interactive exhibitions. Benayoun’s work has been exhibited worldwide and he has received numerous international awards and prizes, including the coveted Ars Electronica Golden Nica. He is co-founder and art director of the CITU research center (Création Interactive Transdisciplinaire Universitaire), and H2H Lab (Human to Human Lab), Paris 1 Pantheon Sorbonne and Paris 8 Universities, dedicated to research and creation in the emerging forms of art. The artworks have been developed by Robin Gareus, at the CiTu-Paragraphe Lab of Paris 8 University, in the frame of The Art Collider project as a part of the PUF program of the FACE Foundation in collaboration with the SFAI (San Francisco Art Institute). 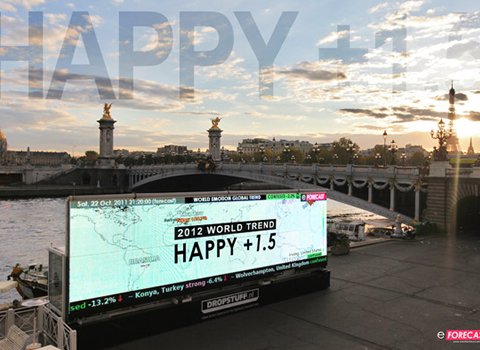 Streaming Museum is the first global public space and online hybrid museum with collaborating locations and cultural centers on 7 continents.

The Big Screen Plaza is a creative initiative to promote art, culture and entertainment in a public venue. BSP seeks out creative content from non-web based sources in order to bring fresh thoughts and visuals to our audience. The goal of BSP is to continuously aggregate content to our outdoor LED screen while also establishing a network of portals where content may be viewed. BSP is built upon shared experiences.  The 30 x 16.5 ft. HD format screen is located at 29th Street and 6th Avenue, adjacent to the Eventi Hotel. For more information visit www.bigscreenplaza.com.