Stanza: The Emergent City. From Complexity to The City of Bits 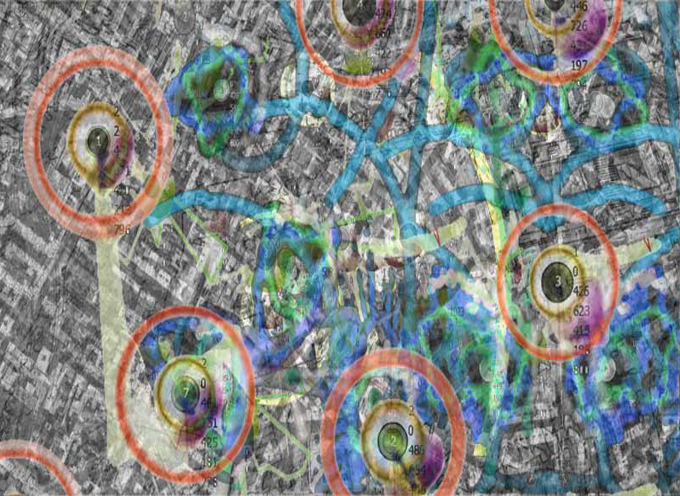 The Emergent City. From Complexity to The City of Bits at Watermans Art Center in London, captures the changes over time in the environment (city) and represents the changing life and complexity of space as an emergent artwork. The installation goes beyond simple single user interaction to monitor and survey in real time the whole city and entirely represent the complexities of the real time city as a shifting morphing and complex system.

The artwork explores new ways of thinking about life, emergence and interaction within public space and how this affects the socialization of space. The project uses environmental monitoring technologies and security based technologies, to question audiences’ experiences of real time events and create visualizations of life as it unfolds. The interactions of all this data are re-formed and re-contextualised in real time artwork.

The art of gathering environmental data

We understand the 20th c in terms of atoms, molecules and gases that move. Our world is now a world of numbers and changing data and information. This art installation manipulates these numbers and the data from the living real world; all of this affects the installation i.e. the artwork in the gallery space and all the changes occur in real time. The real world is made virtual and the virtual is made real again and exposed in the process. This whole piece is a living and breathing artwork. The project focuses on the micro-incidents of change, the vibrations and sounds of the environment using wireless sensor based technologies. 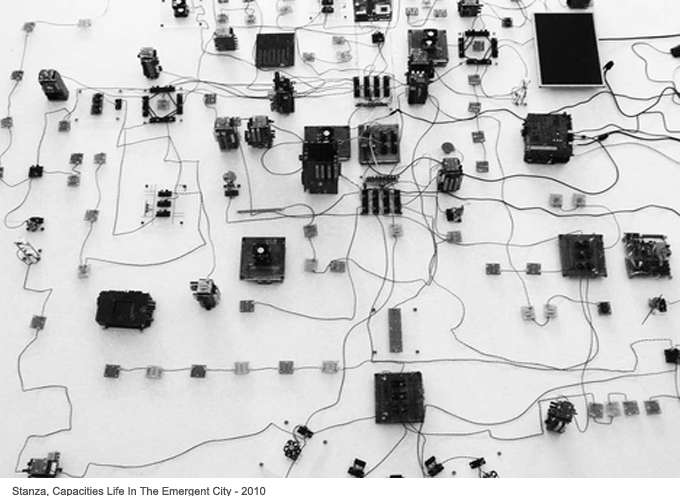 The gallery space becomes a live emergent sculpture to wander through. The changing life in the real time city creates all the changes one experiences in the gallery space. The leads, the wires, and cables are incorporated into the artwork to look like a city map. The installation looks “designed” like a piece of urban design, a city surveyed and controlled. The whole gallery space becomes one large artwork made from real time city information and data. The moving objects, fans, changing lights, motors, noises, that you encounter in the gallery are all responding to changes in temperature, light, pressure, noise, and the sound of the city outside. The aesthetic and feel of the space looks like an electronic city. The city is made of units, grids, repetition, building blocks.

The artist’s own sensors network is laid out across the city to collect and monitor the data i.e. temperature, light, pressure, noise, and the sound of the city. The artwork is a responsive installation with embedded interactive elements. It is responsive to the live environment via sensors and interactive with its embedded CCTV systems. The artwork gathers data from the city (environment) via a custom made wireless sensor network. This is then represented virtually and then this virtual city is represented as this artwork installation. The work becomes a manipulation of data that ‘powers’ all the ‘events’ ‘actions’ and ‘processes’ in the installation.

Stanza has been commissioned to develop Synchronicity, an app to be launched the same time when the exhibition at Watermans opens. The app will be available to access after the exhibition closes. This installation consists of: 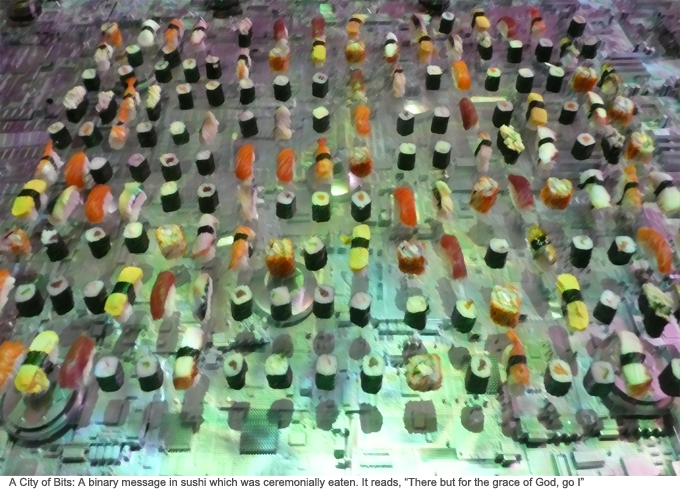 Stanza is an expert in arts technology, CCTV, online networks, touch screens, environmental sensors, and interactive artworks. Recurring themes throughout his career include the urban landscape, surveillance culture, privacy and alienation in the city. Stanza is interested in the patterns we leave behind as well real time networked events that can be re-imagined and sourced for information. His mediums include generative artworks, paintings, installations and public artworks.

Educated in fine art at Goldsmiths College in the early eighties he later went on to study at Greenwich University and Central Saint Martins Art College London. Stanza returned to Goldsmiths College as a AHRC arts research fellow. He is a pioneer of net art and was one of the first to use internet art as a medium. His websites and net specific artworks have been online since 1995 and these online projects have reached an audience of over four million visitors.