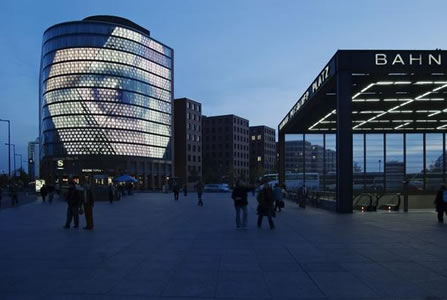 SPOTS, the media installation at Potsdamer Platz,Berlin. presents 33 Questions per Minute by Rafael Lozano-Hemmer: questions from passers-by become part of an interactive work of art.

What is life? Who am I? Where do we come from, and where do we go? If youâ?Tve ever wanted to ask a deeply personal question on a gigantic media facade, then as from 13 December 2005 you can by taking part in the interactive art project 33 Questions per Minute (33QPM), Relational Architecture 5 by Mexican-Canadian artist Rafael Lozano-Hemmer. Passers-by can type whatever questions are occupying them into a terminal that is installed within viewing distance of the SPOTS light and media facade.

SPOTS is one of the largest light and media installations in the world and is integrated into the facade of Potsdamer Platz 10. As the name suggests, 33QPM will display 33 questions each minute. If no question has been typed in at the terminal, the computer generates the questions itself from a virtually limitless source of sentence fragments, combining human curiosity with purely mechanical, often meaningless strings of words.

The software, which Rafael Lozano-Hemmer developed himself, can generate 55 billions questions in German, English and Spanish. It would take 3,000 years to output all the possible question combinations. Lozano-Hemmer: â?o33QPM is a project that represents mechanical irony. Inexhaustible grammatical algorithms make a romantic and hopeless attempt to ask questions that have never been asked before.

The words are combined electronically and form random links between totally disparate levels of experience?