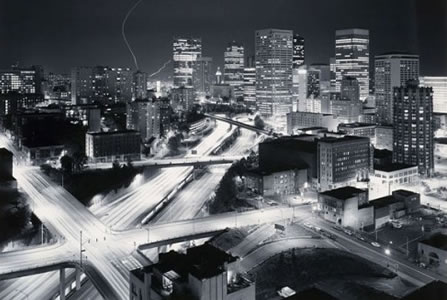 The Canadian Centre for Architecture (CCA) presents “Speed Limits”, an exhibition devoted to the inescapable presence of speed in modern life, in art, architecture and urbanism, and in the graphic arts, economics, and the material culture of the industrial age and our own age of information. The exhibition spotlights the hundredth anniversary of Italian Futurism, the movement to which we owe the famous statement that appeared in its founding manifesto: The world’s magnificence has been enriched by a new beauty: the beauty of speed..

The exhibition is co-organised with The Wolfsonian-Florida International University in Miami Beach and is curated by Jeffrey T. Schnapp of the Stanford Humanities Lab. Speed Limits is on view at the CCA

Critical rather than commemorative in spirit, “Speed Limits” explores a single Futurist theme from the standpoint of its contemporary legacies. The exhibition probes the powers and limits of the modern era.s cult of speed in the domains of circulation and transit, construction and the built environment, efficiency, the measurement and representation of rapid motion, and the mind/body relationship. A variety of objects spanning a 100-year cultural history reveal the long-standing polarities and closely intertwined relationship between the fast and the slow.

In recent years, the Canadian Centre for Architecture has undertaken a number of projects addressing the question of limits. The limits of visual perception in Sense of the City, of postwar notions of progress in 1973: Sorry, Out of Gas, and of Modern urbanism and top-down planning in Actions: What You Can Do With the City, stated Mirko Zardini, Director of the CCA. All of these exhibitions identified inventive and original ways of challenging some founding myths of contemporary life, while bringing to light practices that are shaping daily experience. Speed Limits investigates one of the greatest of these myths, and challenges us to find alternatives to the reliance on speed in contemporary society..

Presented in the CCA.s main galleries, the exhibition features more than 240 objects from the collections of the CCA and The Wolfsonian, including books, photographs, advertising posters, architectural drawings, publications, and videos, which together illustrate the debate about speed and present a multifaceted view that is both a defence of speed and an implicit criticism of its negative effect on contemporary life. Covering the period from 1900 to the present, the exhibition analyzes the evolution of the process of production and construction, the beginnings of prefabrication, the household, traffic and transit, and the workplace, as viewed through the prism of speed, and focuses on the opposite poles of productivity and hyperactivity. 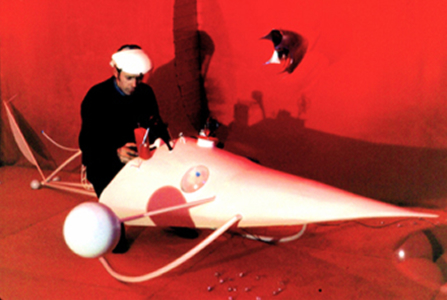 Conceived and installed in a linear fashion, each of the five distinct but interrelated themes is explored in its own gallery: Pace, Traffic, Fast Construction, Efficiency, Motion Capture and Measuring, and Mind/Body.

The exhibition introduces juxtaposing notions of fast and slow via two large-scale video projections. Entering the first gallery, visitors occupy the space between a slow-moving snail seen on a ceiling screen above, and footage of a vibrant cityscape on the floor below. The room also contains a group of Futurist material including a reproduction of Filippo Tommaso Marinetti.s Manifesto of Futurism published in Le Figaro on 20 February 1909.

Multiple perceptions of traffic and its models are vital to an understanding of the city and society. The exhibition bears witness to the prevalent dream of an urban space with freelyflowing traffic, and illustrates the concept of the grid or network that governs the movement not only of objects and goods but also of information. This is juxtaposed with the breakdown of circulation, the traffic jam. The overcrowding of city streets is captured in a series of photographs John Veltri took in New York City in 1938. Visual records are accompanied by archival documents and studies of transportation efficiency and accident patterns related to increasing speeds.

Architecture is a motive force behind the speeding-up of life, reflected in the increasing efficiency of construction processes. The phenomenon is illustrated through photographic sequences capturing the erection of the Irving Trust Building ( New York ), the Eiffel Tower ( Paris ), and Rem Koolhaas.s China Central Television building ( Beijing ). The fast pace of construction of these and other buildings can be analyzed by studying dated sequential images. While the quickly built Empire State Building was a masterpiece of construction, Andy Warhol’s film Empire represents it in stark contrast, as a static .moving image.. Prefabrication served as a major drive towards increasing construction efficiency, and is represented by various trade catalogues of homes and other building types, as well as photographs documenting their assembly. The exhibition includes works by J.J.P. Oud and Cedric Price, reflecting the sustained interest in modular housing by architects throughout the 20th century.

Examining how notions of efficient production evolved over time, the exhibition focuses on two types of space transformed by speed, one public and the other domestic: the office and the kitchen.

Filing systems, processors, and office furniture play a central role making work spaces fast and efficient. A remarkable 1936 project by Josef Ehm features an electrically-powered mechanical classifier, allowing workers of the Central Social Institution in Prague to access large-scale card catalogues via mechanised desks on lifts. The exhibition also includes photographs by Balthazar Korab that capture the modernized workspaces of the 1960s, as well as studies of the productivity of workers and their equipment such as Frank B. Gilbreth.s films of American workers in the 1910s and ’20s. Photographs of Christine Frederick show her testing and demonstrating kitchen efficiencies in the early 20th century, when electrification, new equipment and appliances, and a redesigned space increase the speed of domestic activities. Alongside commercial artefacts and documentation, the exhibition includes architects. studies such as drawings by Le Corbusier analysing kitchen dimensions and by Cedric Price for modular kitchen in a prefabricated steel house.

Addressing the cognitive challenges with which humanity is surrounded, the exhibition features material about information compression through strata of signs, signals and messages, or diagrams that reduce complex traffic data to a usable visual representation. Increasingly, humans are processing complex overlapping of information including time and related data. This growth is reflected in a collection of clocks and calendars illustrating the tempo of modern life, and the increasing sophistication and number of instruments and devices that measure motion: accelerometers, altimeters, odometers, speedometers. Also presented are posters and graphics whose design captures the notion of speed in order to more effectively promote cars, tires, oils, and other products or services built celebrating new levels of speed.

The exhibition suggests different ways in which acceleration is associated on the one hand with pleasure . ecstasy, the search for powerful sensations, and overstimulation . and on the other with exhaustion, risk, and injury. Representations of the body in motion include the transformation of the body itself into a speeding object, gymnastics and popular athleticism in the early 20th century, the current cult of the body, natural and artificial improvements in physical culture, stimulants and tranquilizers, and the remedies associated with stimulants. Among speed.s pharmaceutical avatars are caffeine, cocaine, amphetamines, and the active ingredients in energy drinks. This final gallery bridges the century by combining the photographic studies of motion conducted by Edward Muybridge in 1887 with a large-scale projection of Usein Bolt.s record-breaking performance at the 2008 Olympic Games.