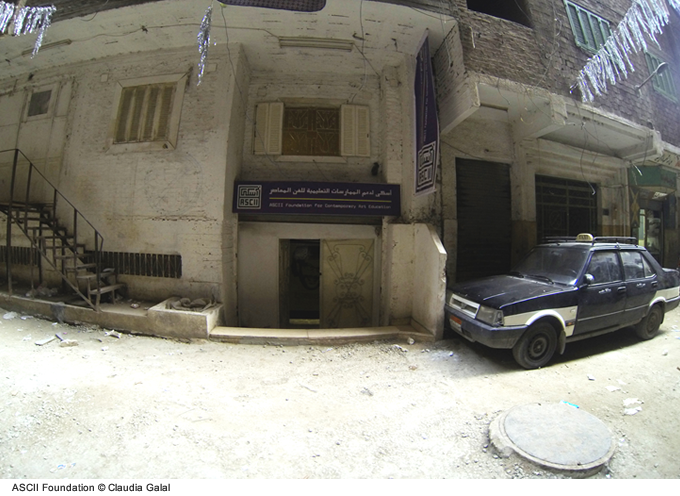 The activists’ network and the underground art scene in Egypt have been following in these years a path that remembers for many aspects the birth and the raise of the Reclaim The Streets movement in the England 90s (then in all Europe).

That movement sought the right to live the public spaces to share ideas, solutions and resources, because they belong to everybody and they can be filled by an alternative vision instead of the governmental one, made of control, prohibitions and restrictions. Spaces, walls, streets, exposing the social injustice, the lack of democracy, the gender violence and everything doesn’t work in the country.

And, of course, the struggle of the Egyptian activists can be included in the huge Occupy movement: Tahrir Square like Zuccotti Park, Puerta del Sol and Gezi Park. But we see that not only riots and demonstrations are useful tools to fight the power: even street art, public performance, satirical magazines, books and art exhibition – culture, in one word – have a great importance.

Even if the revolution hasn’t been enough to change the daily life of Egyptian people, it served to reignite the desire to change things in the minds of many. This change in attitude is felt primarily among young people and in the cultural world, which seems to have awaken a certain activity of ideas and facts. 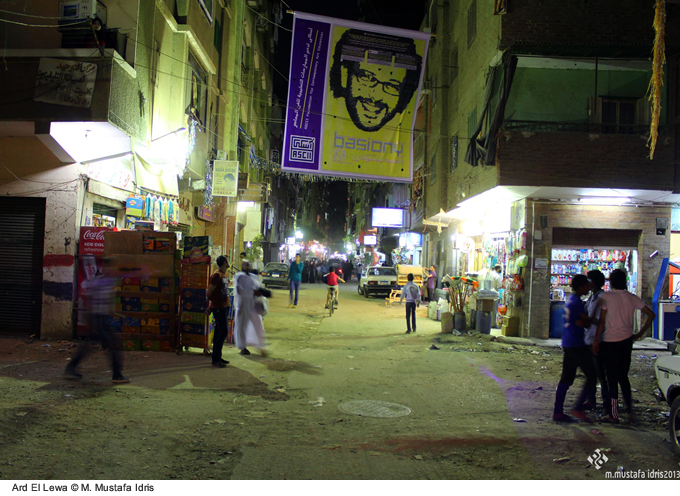 It’s true that cultural institutions linked to the state do not have freedom of action, it is true that the big galleries and private foundations are not brave enough to face the new challenge launched by the revolution, but it is also true that there is a parallel universe of small galleries and independent associations taking risks and supporting young artists from different fields. Painting and sculpture, but also graphic design, video and sound art, graffiti and street art, everywhere in Cairo you can feel a certain positive agitation, even if not every interesting project can find the deserved visibility.

Paradoxically, given that one of the consequences of the revolution and the subsequent socio-political changes has been the dramatic decline in tourism, now the Egyptian artistic and cultural scene is forced to deal mainly with local audience, young and enthusiastic, and with foreigners residents in Egypt. If once the cultural request was addressed, above all, to the rich and ancient tradition and to the stereotypical art tourists-oriented, now the demand aimed especially to researching and discovering new artists, new movements and new media, able to communicate with the rest of the globalized world.

The revolution of 25th January 2011 has been an important rupture in the Egyptian art and culture, but some problems are still. On the positive side, as the visual artist Mina Nasr told me: “The revolution has been important for art, because it has pushed many people to share experiences, skills and ideas. So even the circulation of art has become easier, many young people have been attracted by street art and graffiti, creating creative collectives and organizing events. We can see the new relationship between ordinary people and artists, between art and the road, which before was missing completely”.

From the same perspective, even if a little bit less optimistic, the visual and multimedia artist MO AL said to me: “The art scene in Egypt has become more active after the revolution, but we have a real problem in organizing and curating new exhibitions. Other difficulties remain in writing about and criticizing contemporary projects. Regarding my work, I prefer to show my projects in unconventional spaces, not galleries or institutions, but garages, abandoned factories or houses and so on. However, there are new art spaces and some of them have interesting links with other spaces around the world”. 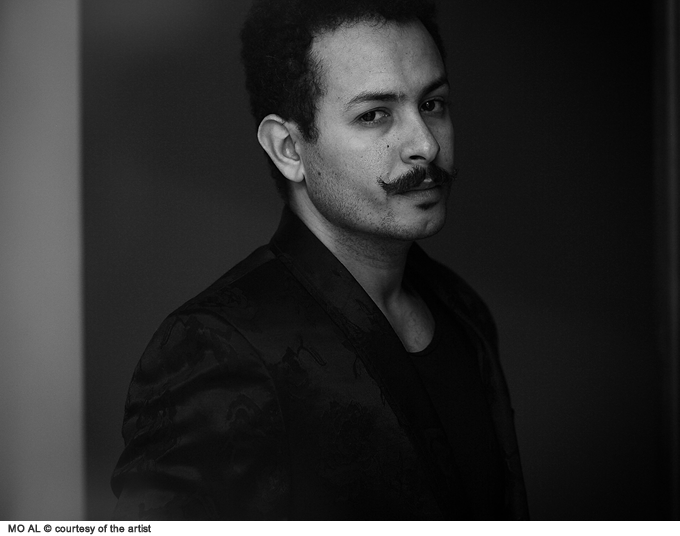 Maybe one of the most important and famous galleries in Cairo is Mashrabia, located in the central Champollion Street and founded in the mid-seventies. The current management is now celebrating its 25th anniversary with a rich year-long series of events including exhibitions, presentations, talks and discussions. Thanks to the takeover, it has established itself as a benchmark for contemporary art in the capital since the nineties, introducing foreign artists and promoting local talents. The preference for innovative languages, delivered from the strong decorative elements that dominated the Egyptian art, and the taste for original and powerful works, has leaded the gallery in its choice of the program. Mashrabia often hosts art exhibitions of different genres, such as concerts, theatre performances, experimental film screenings, readings and lectures, and also promotes projects not necessarily taking place inside the gallery.

Another key place in the art scene of Egypt, with a focus on the latest urban trends, is the Townhouse Gallery. Located at a strategic point in Downtown, between coffee and workshops, Townhouse established in 1998 as an independent art space and a non-profit organization, with the ambitious goal to bringing people closer to the different forms of contemporary art. The Townhouse tries to support artistic practices through a program of solo and group exhibitions, residences for young artists, scholarships for researchers and curators, training workshops, educational events and awareness campaigns.

Then, it puts a strong effort in the creation of a network bringing together local and international professionals and amateurs. In addition to the gallery itself, on the first floor of the main building, the Townhouse includes a large open space of 650 square meters, called Rawabet and made from a former garage, which is the perfect setting to host street art, new media art projects, sound and video.

As a whole, in Cairo there are few galleries dealing with new trends in contemporary art, such as the small Nile Sunset Annex in Garden City, the ambitious Articulate Baboon in Giza or the new Gypsum Gallery in Zamalek, opened in October 2013. Talking with the young Lybian-Egyptian artist Marwa Benhalim, born and raised in Cairo, she said me that “the art scene is growing fast in Egypt, especially after the revolution. The art market is in difficulty, but there is also a huge artistic and creative output, finding cool and coordinate ways to be exposed. 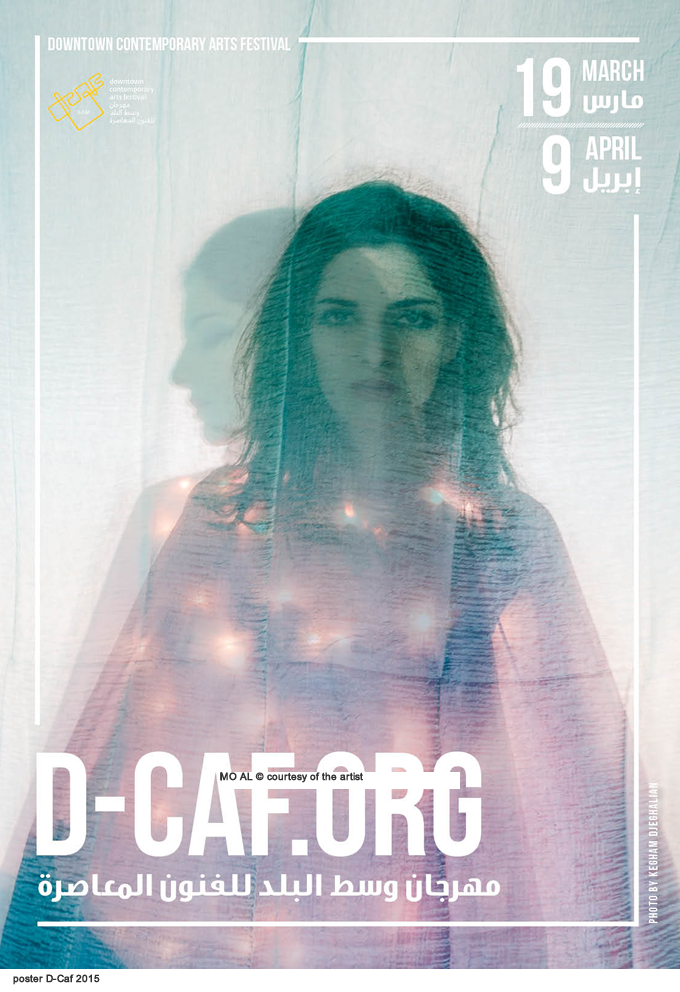 For example, some festivals like D-Caf and Cairo International Video, but many other spaces, too. Together with D-Caf Festival, the top list of my favourite places for art, here in Cairo, includes Medrar for Contemporary Art, CIC (Contemporay Image Collective), ASCII Foundation for Contemporary Art Education, Gypsum Gallery and Falaki Theater. I’m sure there are other cool spaces, but I follow these ones with interest and curiosity because I’m trying to imagine their future evolution”.

Looking closely at some of these Cairo spots, ASCII Foundation for Contemporary Art Education is particularly important because of its position, in the popular and suburban neighbour of Ard El Lewa, but also for its almost ambitious aim. ASCII is a centre of research for contemporary art, new media and technology, created by Shady El Noshokaty, who is both international artist and professor at the American University in Cairo. In August 2014 the ASCII centre opened its doors to students, researchers and artists, starting activities with a series of intensive workshops on sound art, animation, game art, web design, photography, graffiti and public art (in collaboration with the Mona Lisa Brigades collective).

Back in the central Garden City district, we find Medrar for Contemporary Art, which arises both as non-profit collective and innovative space for arts, setting the stage for artists seeking to have extensive conversations and collaborations with their peers to develop their purpose as active contemporary artists thus creating a more dynamic and inspired movement. Medrar tries to encourage cooperation, over competition, among artists, locally and internationally, as well as between institutions, critics and technologists to engage and experiment in the transforming playground of media arts. For example, Roznama is a periodical competition and exhibition for contemporary visual art by young Egyptians, encouraging the search for new forms and methods in a completely different approach than academies and art schools. 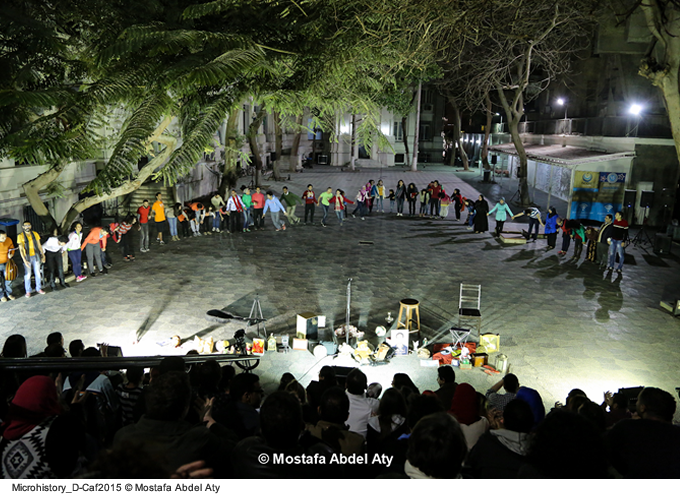 Among festivals, the D-Caf (Downtown Contemporary Arts Festival) has surely a relevant role in shacking the cultural vibrancy of Cairo, proposing itself from the beginning as an international and multidisciplinary event and involving several spaces in the crowded Downtown area. Live music, theatre, dance, visual arts, cinema, new media and video art and everything belonging to the contemporary overview with many artists from Egypt and abroad. In addition to theatres and other conventional venues, since its first edition the D-Caf has broadened its borders, bringing art on unusual sites, away from the tradition, such as historic buildings, shop windows, alleys and sidewalks, rooftops and balconies, to push the audience and performers themselves to rethink their relationship with the city. The last D-Caf Festival edition took place in Cairo from 19th March to 9th April 2015: the programme was extremely attractive across all the artistic disciplines.

Despite some important positive elements, probably related to the huge creative explosion erupted in 2011 with the revolution, from the end of 2013 several independent artistic events have been forced to retreat gradually from public spaces under the constant pressure of the authorities, justifying any form of surveillance, censorship and repression by the pretext of security. Public art, with its infinite possibilities of expression and circulation, has been a hot topic during the past four years with special attention to the spaces, their use and their management.

Since 2011, and for the following two years, public spaces were the vital centre of creative activities in Cairo, where artists, collectives, musicians, bands and performers have enjoyed a certain openness, advanced both by the (almost) total absence of security forces in the streets and by the desire of many people to reclaim those spaces.

Unfortunately, from the last months of 2013 till now, there has been a drastic turnaround because of new policies of control and repression from the government: security forces has been come heavily back to the streets of Cairo. However, a large part of the artists’ community is keeping to oppose the current situation choosing to show new works even in public spaces. 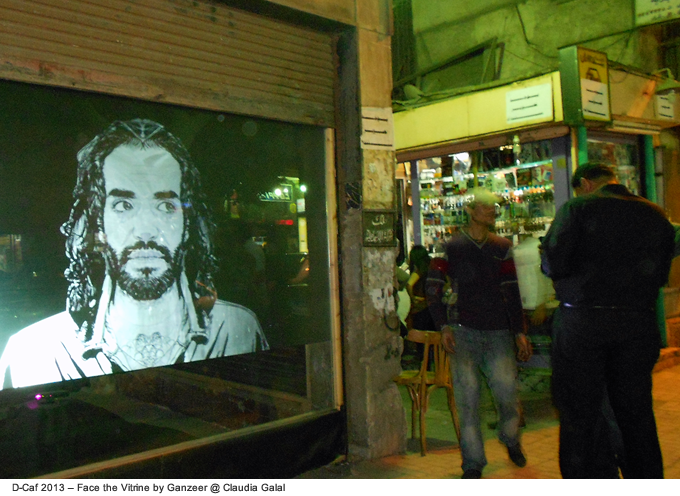 Ironically, in the various context of public spaces, it is easier to achieve greater margins of freedom for single artists or small collectives, while large organizations with a consolidated structure are facing heavy obstacles in their path, probably because they are seen as potential threats to the established order. For example, the beautiful itinerant multidisciplinary festival El Fan Midan (“Art in the square”) sadly closed its experience in Cairo in October 2014 because of too many hitches with authorities.

We foresee an arduous situation for Egyptian art and culture scene in the near future, but we are confident that the strength and the knowledge, acquired during and after the revolution, turn into positive energy to face troubles. The artistic vitality and the cultural unrest can not be stopped by mere government policies.