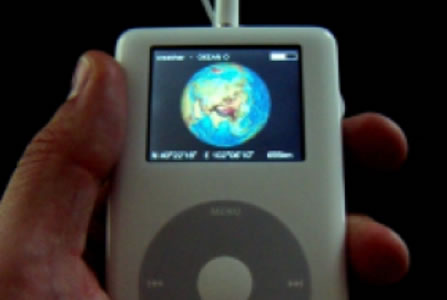 Sound is everywhere – SOUND//BYTES is drawing attention to previously unheard-of things. The forthcoming exhibition uses the term “soundbytes” in order to deal with artistic research into new acoustic materials as well as electronic acoustic concepts and installations which use sound fragments and digital technologies in acoustically-based design.

The works of art selected for the present exhibition represent consistent and coherent studies of various acoustic materials, qualities and parameters. What matters here is not so much inventing unheard-of sounds or new musical structures but rather rediscovering available materials, changing them into sound, questioning their assumptions, restructuring them, overlapping them, re-interpreting them and placing them in an unusual context. Installations, performances, presentations, acoustic walks and interventions in the City of Oldenburg offer the visitor manifold possibilities to question echoes, sounds, rhythms, frequencies and electro-magnetic fields and to perceive everyday situations acoustically in a new way.

The soundbyte stands for the smallest digital, audio-linguistic unit and serves as the foundation for sampling, transformation and re-contextualisation strategies. New dimensions of acoustic space are opened up by digital communications media to provide unusual listening experiences. Acoustic art as a concept is currently receiving fresh stimuli through new mobile communications media being tied into the mix. We encounter them daily: mobile telephones, the internet, wireless LAN and GPS. Unlike the concert situation, the listener experiences through his mobility and interactive relationship with these media, new, overlapping electronic acoustic sound and data spaces created by digital appliances and technologies.

Jens Brand (D) presents his newest version of the ‘G-Players’ series, which in principle functions like a regular CD or record player. However, it does not revolve in the grooves of a record but reads reads the Earth’s surface virtually via satellite. The data thus obtained are translated into sound.

Carl Michael von Hausswolff (S), works on the interface between the visual arts, and for him experimental electronic music and performance, delicate interference in the grid or disturbances caused on the paths of communications technologies are formable raw material he can translate into acoustic and visual terms.

Yunchul Kim (KR/D) makes it possible for visitors to see and listen to the limitless codes of a data stream in real time. ASCII signs and tones form an organism in their own right in wave form reflecting the operations of the server so we can perceive them.

Thomas Köner (D) in his video trilogy ‘Péripheriques’ enchants viewers with overlapping soundscapes and pictures of urban street scenes from three global metropolises. At the exhibition, the first part, ‘Harar (annicca)’ is on view. In it image and sound overlappings correspond and original sounds from the filming location blend with imaginary sounds.

Christina Kubisch (D) invites visitors to SOUND//BYTES to discover acoustically the electromagnetic fields of the city of Oldenburg with a special headset. She has marked the sound places of downtown Oldenburg that seem to her particularly typical or special. Pedestrians experience an individual soundscape – generated for instance by security systems, electrical appliances and facilities or mobile electronic devices – which they can record, burn on a DVD and take home with them.

Akitsugu Maebayashi (J) also overlays temporal and spatial perceptual planes by confronting the echo of a metronome that he has recorded stereophonically on a walk through Oldenburg with the live sound of a metronome at the exhibition and overlapping them. ‘Binaural’ recordings are stereo recordings made with a special recording technique that uses earphones as the best possibility of realistically reproducing a spatial acoustic impression.

Kaffee Matthews (GB) makes possible a different form of listening that is utterly unlike mobile listening (podcasting) or the rigid seating posture in an exclusive concert situation: the visitor lies in a ‘Sonic Bed’ so that the sound properties of experimental electronic music are sensorily perceptible all over his body.

micromusic (CH) , a Swiss group, have made many friends from the Computer Game scene with their internet platform and their performances because they compose with Gameboys or vintage Atari consoles. The creators of this low-tech music community, carl (Gino Esposto), wanga (Paco Manzanares) and bacon (Michael Burkhardt), who have thrown many an ear into ecstasies of rapture and made many a leg jig to their tunes, will conduct a jam session at their concert on 16 March 2007 with Gameboys, mini-samplers and laptops through micromusic, current pop and found-footage material. After a break of more than two years, the three friends are now re-united for the first time live – in Oldenburg at the Edith-Ruß-Haus für Medienkunst.

Annina Rüst (CH) , the 2006 scholarship holder at Edith Russ House for Media Art, is developing a participatory sound remixing system with which the computer can be used as an acoustic instrument in rooms and public places with the aid of WLAN. She uses VoIP software to carry out her interventions in urban spaces. The walk through the city or PC work in public spaces turns into an acoustic experience that becomes the dominant element of an overarching scenario consisting in environment, situation and physical action. The performative character of these artistic actions refers to a category pivotal to electronic acoustic art: the fleeting and ephemeral, which, linked with concepts such as presence, visualisation and concentration are of central importance to developing critical awareness of the media.