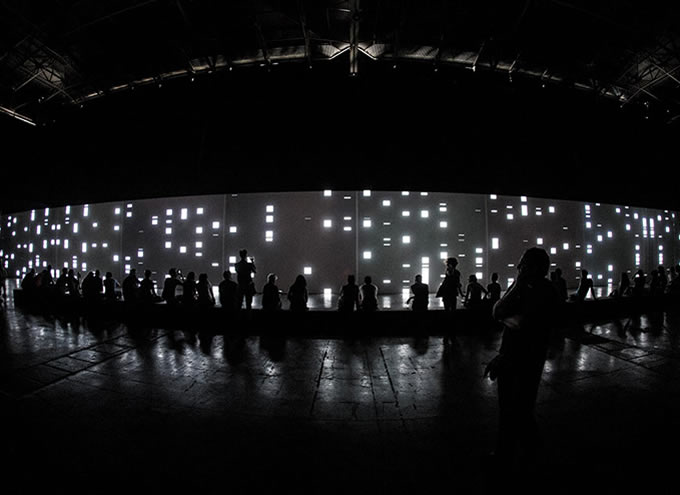 Sónar+D is an international conference that brings together a combination of activities with a common theme: the relationship between creativity and technology, and the digital transformation of the cultural industries involved.

In Barcelona on 18, 19 and 20 June, Sónar+D will assemble today’s leading figures in creative innovation related to music, audiovisual, interactivity, design, training and communication sectors. The 3rd Sónar+D positions itself as a space for interaction between the creative and technology communities, with the aim of connecting ideas and projects with the dynamics of the digital economy.

The 2015 program activities focus on the role of the creators in the context of technological innovation, as well as the rise of digital platforms as key tools in the generation and development of content. Participating at this year’s Sónar+D will be an estimated 4,000 professionals and around 2,000 companies from 60 countries.

Sónar+D is divided into four areas – Exhibition, Congress, Networking and Live Performance – with an exhibition space, an auditorium for conferences and workshops plus zones for product demonstration, hands-on interaction and networking. Live shows and new media facilities are also scattered throughout the festival. A part of the activities are only accessible to accredited professionals, while others are also open to the general public.

This year, to enhance the experience for attendees, Sónar+D expands and moves to the Fira Montjuïc’s Hall 4, a spiral space that reflects the events’s open and interactive spirit. These changes reaffirm Sónar’s pioneering nature in reinventing the use of public facilities and spaces. Sónar+D will also bring forward its opening time to 10am – two hours before the start of Sónar by Day – and run until 8pm.

Sónar+D also becomes a hub between the creative communities and technology industries in Catalonia and is an essential part of Barcelona’s digital strategy. To this end, Sónar+D 2015 has signed collaboration agreements with the Barcelona City Council and the Generalitat Department of Culture’s ICEC (Catalan Institute of Culture Industries).

Sónar+D grows in ambition and scale

The 3rd edition of Sónar+D takes a big step forward in its ambition and scale. The event is already one of Europe’s key dates for discovering technologies, platforms, personalities and initiatives that determine the current state of creativity in its many forms. These range from music, audiovisual, interaction and technologies for makers, to new services and digital content.

In its third year, Sónar+D has become a transversal and multidisciplinary event, bringing together representatives from across the digital culture spectrum: artists, designers, technologists, programmers, open hardware and software platforms for makers, interactive and app development studios, companies and university creative departments, the music and audiovisual industry, online platforms, start-ups and investors.

Sónar+D and the Sónar festival will turn into a giant space for exchange and dialogue among the developers of new technology, the artists who used it for their creations, and entrepreneurs or companies adding value with new business models.

The pioneering format combining the Sónar festival and Sónar+D Congress has grown into a unique “360 degree” event, in which  equal attention is paid to all phases of a project: from its creation and the development of technologies to make it possible, to its production and eventual presentation on the stages of the festival. This uniquely profiled “business and leisure” event will also turn Sónar+D into an inspirational laboratory for RTD and innovation sectors beyond the creative sphere that wish to detect trends and cultural consumption habits.

Sónar+D hopes to act as a node between creative communities and the technology industry in Catalonia, and specifically position itself as an essential part of Barcelona’s digital strategy. Within this strategy, this year will see a progressive de-seasonalization of the event, increasing collaborations with institutions and creators/users communities, in both the days building up to Sónar+D, and throughout the year via various scheduled workshops.

Among the leading figures already confirmed and included in this year’s Sónar+D program there will be Kickstarter, Vimeo, Pinterest, littleBits and Arduino, whose participation will include several activities demonstrating first hand, their models for business, potential growth and their keys to success, as well as providing various workshops and master classes.

Filmin, Spain’s principal online streaming platform for TV series and films will partner with Sónar+D to develop a series of workshops for audiovisual industry professionals. Their online film festival, Atlántida Film Fest, will be integrated into the Sónar+D program.

The Start-up Competition returns and will focus on the creative industries, selecting 10 companies from among a hundred to compete. Once again the Music Hack Day organized by the UPF’s (Pompeu Fabra University) Music Technology Group also returns, with this year’s challenge addressing wearable technology for musical creation and interpretation.

Following the success of its impressive visualisation of musical genres data presented in 2014, the Barcelona Supercomputing Centre returns to Sónar+D with an even more ambitious project called “We Know What You Did Last Sonar”, a huge real time collective data analysis experiment in which the public will participate.

This year’s other key events will be master classes from Indy Saha on Google Creative Lab, the Google ideas incubator; the European Commission’s presenting their project STARTS (Science, Technology and the Arts); the talks with Dan Gray, creative producer of ustwo (creators of the 2014 video game Monument Valley); or Richard Russell, music producer and founder of XL Recordings among others yet to be announced.

Sónar+D and the Sorigué Foundation present the 2nd edition of the SónarPLANTA art submission prize which will première a large-scale installation specifically created for the festival, to be announced on April 29. SonarPLANTA is the joint initiative by Sónar and the Sorigué Foundation held over three years and aims to foster and celebrate research and experimentation with creative languages around the technology and New Media art. Sónar+D program will also include activities in neighbouring cultural institutions such as the Mies Van der Rohe Pavillion and CaixaForum Barcelona.

Sónar+D 2015 includes outstanding figures of global importance from the creative landscape and its various disciplines. These platforms, technologies and services are used daily by millions, helping to make their projects possible. Without them, it is impossible to understand the creative dynamics  of today. Sónar+D will present first hand, information about the keys to success and the bringing together of user communities from funding platforms for creative projects, digital content distribution channels and powerful technologies for makers, while helping participants to apply them to their own initiatives.

The business platforms participating will include Kickstarter, Vimeo, Arduino, Filmin, Pinterest, and littleBits among others. More to be announced soon.

The faces and stories behind the creative process

One of Sónar+D missions is to present the faces and stories hidden behind today’s most important creative projects, revealing the key elements in their work and to dissect their creative processes. In 2015, the congress will include exceptional record producers, game designers, musicians, technologists and programmers who will open the doors to their studios.

The festival as a laboratory: experimental technologies and languages

Along with success stories and major benchmark projects, the Sónar+D program pays special attention to emerging technologies, aesthetics and dialogues that will shape the future languages. There will be exclusive presentations of new tools, formats, installations and performances that are redefining technology’s aesthetic discourse, with experiments that will transform the festival into a giant laboratory.

There will be presentations and workshops headed by Indy Saha from Google Creative Labs, the European Commission’s STARTS program and the Glassworks studio together with audiovisual production company CANADA. As well as large-scale experiments performed by Barcelona’s Super Computing Centre and the annual Music Hack Day, among more to be announced soon.