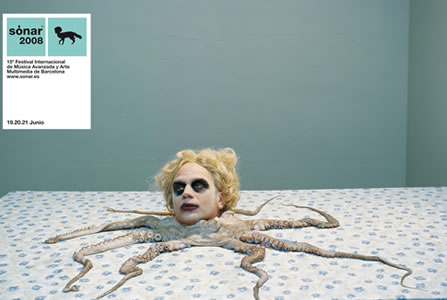 The programme for the 15th edition of Sónar is based on two main themes – the “female factor” in today’s music and “hybridism” as the result of the intersection of musical genres and subgenres. Women have pride of place on the bill. Unquestionable divas of modern pop like Goldfrapp and Róisín Murphy provide a contrast to the confrontational and multicultural glamour of M.I.A. or the vocal alchemy of Camille, the new muse of the “chanson française”.

Leading figures that are impossible to label, such as Justice, Yelle, Diplo, Spank Rock and Boys Noize give this year’s programme an injection of hybrid energy and a proud display of the spirit of ‘Do It Yourself’.

It will be a scenario for encounters and reencounters. Two short-lived fleeting but legendary duos will be reunited at Sónar – synthesiser pop legends Yazoo, and Mike Banks together with Jeff Mills, the genesis of Underground Resistance. On a contemporary note, Jamie Cullum and his brother Ben Cullum join forces with the former member of Underworld Darren Emerson to create BC vs JC featuring Darren Emerson. The collaborators and protégées of Kanye West,
A-Trak and Kid Sister, combine decks and rhymes with the new phenomenon DJ Mehdi.

The “female factor”, Where can it be found?

The 15th Sónar Festival of Advanced Music and Multimedia Art in Barcelona, this year takes the “female factor” as its starting poit for showing the increasing feminisation of today’s electronic music. The bill is made up mostly of women with the most varied backgrounds, styles and attitudes, and men whose musical approach is linked with, is close to or is completely immersed in the “female factor”.

Modern pop divas like Alison Goldfrapp and Róisín Murphy; fighting spirits with varied roots like M.I.A. and Tara de Long; feminine and feminist rappers like Kid Sister and Northern State, in contrast to youthful icons of colourful pop like The Duloks and Yelle; stunning vocals from yesterday and today like Alison Moyet (Yazoo) and Camille. And of course, dancefloor queens like Miss Kittin and Chloé. And what about the men? This female factor is apparent in the approaches of Antipop Consortium, Spank Rock, Flying Lotus and Daedelus.

Electronic hybridism or the indecipherable genetic code of today’s music

The traditional stylistic divisions of electronic music are no longer of any use in explaining the new styles coding onto the market today. It is an intersection of styles which does not respect roots or rigid conventions, in which the features are so vague and the musical genetic code is so mixed up that it is impossible to say for certain who is the musical father and mother of any new artist or sound.

The bill of Sónar 2008 is full of bastard sons – can anyone say with absolute certainty what the main source of inspiration is for Justice, Yelle, Boys Noize, Diplo or the entire labels of Ed Banger and DIRTY? That is exactly the difficulty involved in labelling the most relevant parts of this phenomenon – old labels are no use because this is something new. A headache for non-purists. 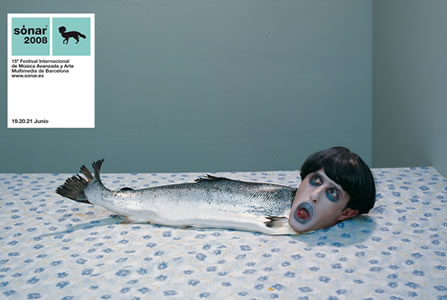 On its 15th anniversary, Sónar 2008 delves into one of the most significant exhibition ventures in the festival’s history. For the first time, a central theme will run through most of Sónar’s exhibition areas: Cinema. Cinema Beyond Cinema is an unusual journey into the present and future of film. But it is a journey that begins on the edges of film, beyond film.

It frames the areas of SonarMàtica, Sonarama, Digital Art A La Carte and on of the SonarCinema’s menu. Two exhibitions, five showcases and three audiovisual shows come together to form Cinema Beyond Cinema, an unprecedented adventure for the eyes of visitors.

The exhibition areas of Cinema Beyond Cinema are as follows:

This year, SonarMàtica, the festival’s main exhibition area, presents Future Past Cinema, an extraordinary exhibition project that creates links between the past and the future of Cinema under a single vision. SonarMàtica is an exhibition that transports the visitor to the fascinating universe of the moving image of the 19th century, as seen through the eyes of artists working with contemporary media . The display is complemented with the simultaneous exhibition of ten machines for creating moving images from the 19th century , from the Tomás Mallol collection at the Girona Film Museum.

Sonarama is on the one hand an exploration based around new forms of articulating film, focusing on light as a seminal element of cinematic art and on the other, it presents a selection of ideas with the potentialities of light as their constituent theme.

This presents some of the new areas of contemporary audiovisual production by means of four digital exhibitions:
– Homo Ludens On The Net deals with the History of Video Games.
– Live Cinematic Explorations In The Era Of Realtime takes a closer look at the most important recent audiovisual production areas: Live Cinema .
– All You Zombies shows that YouTube and GoogleVideo are the great collective participatory video library of the new millennium. The director Jonathan Caouette , a pioneer in the use of Internet in film, shows is his favourite online videos.
– Notodofilmfest.com and Bigas Luna present a selection of the best short films from the latest festival, showing the rude health of this film format on the Internet.

The works selected for Cine-Materia are based on a common idea: the appropriation and manipulation of others’ material: silent films, educational films, Hollywood classics and advertising. Editing becomes a vital tool in all of them the distorting (or creative) element that gives a new form and meaning to the footage encountered.