Solar Equation is a large-scale public art installation that consists of a faithful simulation of the Sun, 100 million times smaller than the real thing. Commissioned by Fed Square specifically for The Light in Winter in Melbourne, the piece features the world’s largest spherical balloon, custom-manufactured for the project.

It is tethered over Federation Square and animated via the use of five projectors. The solar animation on the balloon is generated by live mathematical equations that simulate the turbulence, flares and sunspots that can be seen on the surface of the Sun. This produces a constantly changing display that never repeats itself and gives viewers a glimpse of the majestic phenomena that are observable at the solar surface: these are relatively new discoveries, made possible by recent advances in astronomy. 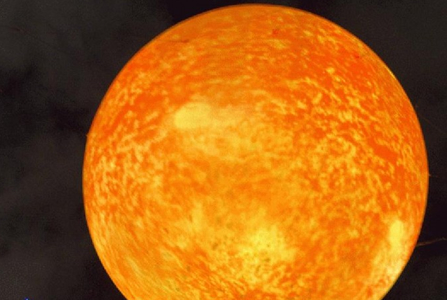 While pertinent environmental questions of global warming, drought, or UV radiation might arise from the contemplation of this piece, Solar Equation is inspired by romantic environments of ephemerality, mystery and paradox, such as those from Blake or Goethe. Every culture has a unique set of solar mythologies and this project seeks to be a platform for both the expression of traditional symbolism and the emergence of new stories