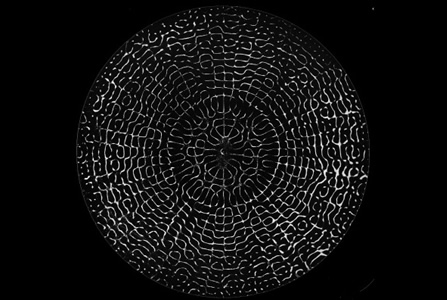 On Tuesday the 15th of December 2009 Digimag presents DATA, the third meeting of the Sincronie Festival of 2009. The event will be directed by Marco Mancuso from Digicult, and will take place from 7.30 PM until 11 PM in the Teatro Arsenale in Milan, and will be an encounter with two Soviet artists, Evelina Domnitch and Dmitry Gelfand, who will talk about their artistic production on the brink between art and science, and will exhibit their live performance 10000 Peacock Feathers in Foaming Acid. The event will be enriched by the projection of the video screening Hidden Worlds, where a series of audiovisual works have been selected that investigate the relationship between audiovisuals and science.

Sincronie is a contemporary and experimental music event that began in 2003. As with the previous editions, this edition is also developed on a theme, which in 2009 was the relationship between music and numbers. From this year, Sincronie is broadening its activities by proposing a three-concert event with international guests, preceded by a series of introductive meetings that are true Listening Workshops. The workshops will then continue throughout 2010.

To stay true to the theme dictated by Sincronie 2009, Marco Mancuso has structured the DATA event like a reflective critique on the existing relationship between contemporary art and science and their rapport with digital, electronic and analogical technologies, on the basis of mathematical processes, numbers, logic abstractions and formulae. The event is centred on the work of the artists Evelina Domnitch and Dmitry Gelfand, pioneers of the creation of sensorial environments where chemistry, physics and philosophy meld together, in relationship with the analysis of human perception of such phenomena. After presentation of their work, which will take place at 7.30 PM, there will be a video screening at 9 PM entitled Hidden Worlds dedicated to some examples of artists who work on the rapport between sound and image, through different techniques, that are generated by physical, chemical-physics, mathematical, electromagnetic and nanometric phenomena. The evening will conclude with the audiovisual performance 10000 peacock feathers in foaming acid where Evelina Domnitch and Dmitry Gelfand will make laser projectors and soap bubbles interact to create immersive and organic images. 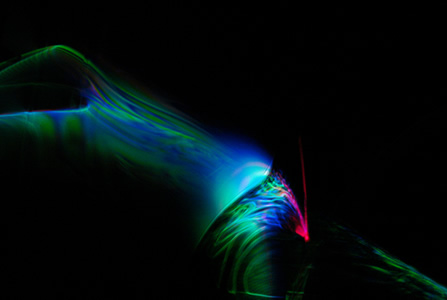 The Hidden Worlds event pays homage to one of the most stimulating and obscure territories of artistic audiovisual contemporary research: that relationship between art and science. By staying true to the binding theme of the 2009 edition of the Sincronie festival  the rapport between music, images and numbers  the video screening collects over 10 works that induce the audience into a critical reflection on the existing relationship between contemporary audiovisuals and science in their rapport with digital, electronic and analogical technologies, on the basis of mathematical processes, numbers, logic abstractions, and formulae. A project that alternates its artists and avoids concentrating on a common aesthetic, on a possible expressive language or used technologies, but rather proposes a panorama of specific systems for sensorial perception, for emotional mechanisms of “saturation” induces through technical hybrids that expand the tradition of analogical experimental cinema and digital audiovisuals, more so now than ever before. For its entire duration, the screening takes the spectator through beautiful “hidden worlds”, made into monitors of the curiosity of artists and scientists for the expressive potential inside specific mathematical processes, as well as physical, optical, chemical and electromagnetic phenomena. From the studies on “cymatics” (the science that studies the shapes made by waves, in other words the frequency that can be vibrational, sound or electromagnetic) by the scientist Hans Jenny (Cymatics SoundScapes) as a theoretical-experimental basis for audiovisual compositions by Alvin Lucier (The Queen of South), to the representation of electromagnetic phenomena in action on the Sun’s surface by a Semiconductor (Black Rain), the passage between audiovisual work from the duo Domnitch/Gelfand seems to be short, where in their first work present in the event (Camera Lucida) they study the chemical-physical reaction of photoluminescence, whereas in the second contribution (10000 Peacock Feathers in Foaming Acid) they analyse the potential of optical phenomena generated by laser lights. And again, if the work on “chemical-grams” of the video makers Jurgen Reble (Materia Obscura) underlines the structures that come from the chemical corrosion of film, as the work by Victoria Vesna (Blue Morph) glorifies the larval evolution of the geometric shape of the Blue Morpho butterfly with nanometric investigation techniques, the product by Lia & @C (int.16/45//son01/30X1, those of Carsten Nicolai (Spray) and Karl Kliem (Vienna Concert – Excerpts), are based on the software representation of interference phenomena, beats, accumulation and Moirè (the optical illusion generated by geometric sequences of interference phenomena). And finally the pioneer works (that aren’t included in the screening) by Mary Ellen Bute (Abstronic) and John Whitney (Permutations) represent one of the first testimonies of the direct rapport between experimental cinema and maths, the video by Thorsten Fleisch (Gestalt), which constitutes a recognition of the quaternion world (four-dimensional fractals) visualised in a three-dimensional space, and the work of art by John Campell (LI: The Patterns of Nature), evidences the geometric structures spontaneously present in Nature, all represent the perfect example of how Hidden Worlds wants to be a testimony of a deep critical conviction: contemporary audiovisual art today, more than in the past, has the technological instruments and the ethical duty to confront itself with the empirical world around us and the “natural” technologies within it. Technologies that should be collected, observed and learned to control, just like man has shown that he can do with light, sound, images and space 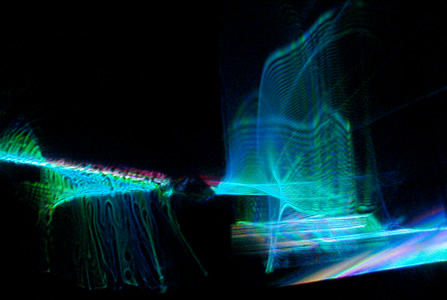 A vacuum or semi-vacuum encased within a gravity and temperature sensitive elastic skin  the scenario of an early universe, a soap bubble, and later, that of a biological membrane. By researching the behavior of soap films, a vast variety of optical, mathematical, thermodynamic and electrochemical discoveries have been made since the time of the Renaissance. One of the earliest means of analogue computing was the soap film calculator (19th century), which tackled geometric problems of minimal surface area. Soap film soft drives are currently being used for blackhole and superstring modeling. In 10000 Peacock Feathers in Foaming Acid, Domnitch and Gelfand use laser light to scan the surfaces of nucleating and dissipating soap bubble clusters. Unlike ordinary light, the laser’s focused beam is capable of crawling through the micro and nano structures within a bubble’s skin. When aimed at specific angles, this penetrating light generates a large-scale projection of molecular interactions as well as mind-boggling phenomena of non-linear optics. Bubble behaviors viewed in such proximity evoke the dynamics of living cells (the lipid membranes of which, are direct chemical descendants of soap films). At the Lebedev Physics Institute in Moscow, researchers Y. Stoilov and A. Startsev have recently discovered that a laser beam traversing a soap film can unexpectedly branch out into micron-thin channels (spatial polariton solitons) that neither diverge from their paths nor interfere with one another upon intersection. These optical tracks, which serve as light-confining waveguide antennae, are molded and elongated by the laser emission. Presumably, the laser dielectrophoretically maximizes the membrane’s refractive index to the point of internally focusing the light. The system behaves like “a powerful optical computer with a gigantic parallel processor, consisting of billions of laser-guiding cells” (Stoilov; Phys.-Usp 47, 2004). In contrast to former soap film explorations by scientists, mathematicians, and artists (the likes of which have included Newton, Chardin, Plateau and Rayleigh to name a few), here, a warped, ‘impossible’ space-time is invented: the laser’s multi-angular paths through numerous bubble surfaces project a dense layering of diverse scales, speeds and vanishing points. The title of the work stems from the Chinese expression, ‘the ten thousand things’, signifying the varifold of cosmic phenomena. Though it may become as thin as a single molecule, all ‘the ten thousand things’ are refracted through the sensitive skin of a soap bubble.