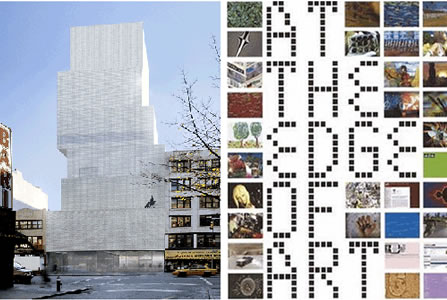 In collaboration with the Solomon R. Guggenheim Museum, Rhizome is pleased
to present Show and Tell, an evening of humorous and political performance lectures.

Activist artists Tara Mateik, founder of the Society for Biological Insurgents, and The Yes Men, an “identity correction” collective, will assume guises and give entertaining talks demonstrating their use of information and “disinformation” to shift balances of power.

In his words, Tara Mateik’s work “stategizes to overthrow institutions of compulsory gender. through performance, video, and intervention.” In Putting the Balls Away, he will reenact a legendary “Battle of the Sexes,” Billie Jean King’s 1973 defeat of the former Wimbledon men’s champion, Bobby Riggs. By playing both roles in a video version of the match, and reviving remarks by sports commentators Howard Cosell and Rosie Casals, Mateik recalls  the controversy sparked by the most watched televised sporting event of the era.

The Yes Men will present the first public demonstration of their SurvivaBall, an advanced new technology designed to keep corporate managers safe, even when climate change makes life as we know it impossible. Recently unveiled at a corporate conference by Yes Men masquerading as Halliburton executives, the SurvivaBall is “designed to protect the corporate manager no matter what Mother Nature throws his or her way.”

Curated by Marisa Olson, Editor and Curator, Rhizome.org, as a component of their 10th Anniversary Festival of Art & Technology. Rhizome is a leading new media arts organization, and an affiliate of the New Museum of Contemporary Art.