Seek: the solo exhibition by James Clar at Carroll / Fletcher 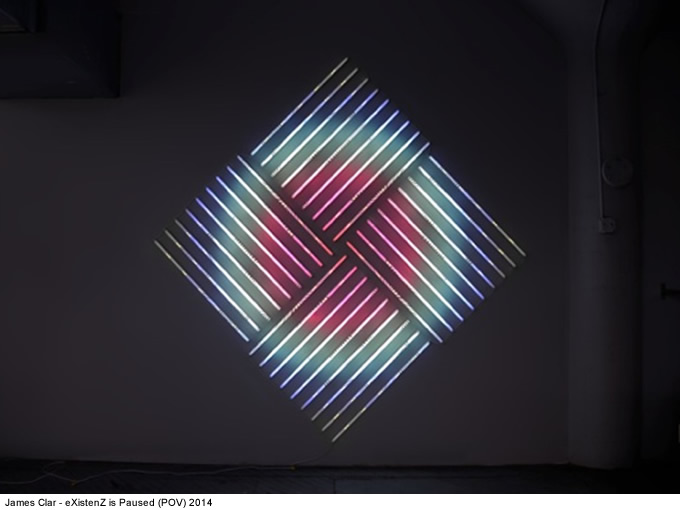 Increasingly, the proliferation of technology and the Internet has shifted the way we understand the world – allowing us to inhabit alternative spaces outside of reality – virtual or otherwise.

Clar aims to reveal the multiple possibilities engendered by the play between strange and disparate environments of the real and unreal. This exhibition presents a series of new works marking Clar’s solo UK debut.

In eXistenz is Paused (2014), a series of works comprising of a video installation, imagery and a light sculpture, Clar explores the notion of reality as a computer simulation. Created using an EEG software program with a sensor attached to the central processor of a laptop, which plays an edited clip on loop from the 1999 film Existenz, the video presents a recording of the machine’s electrical activity or “brainwaves”, as it processes a series of commands that allow it to play the movie. The same EEG data finds material presence in a large light sculpture on the adjacent wall. 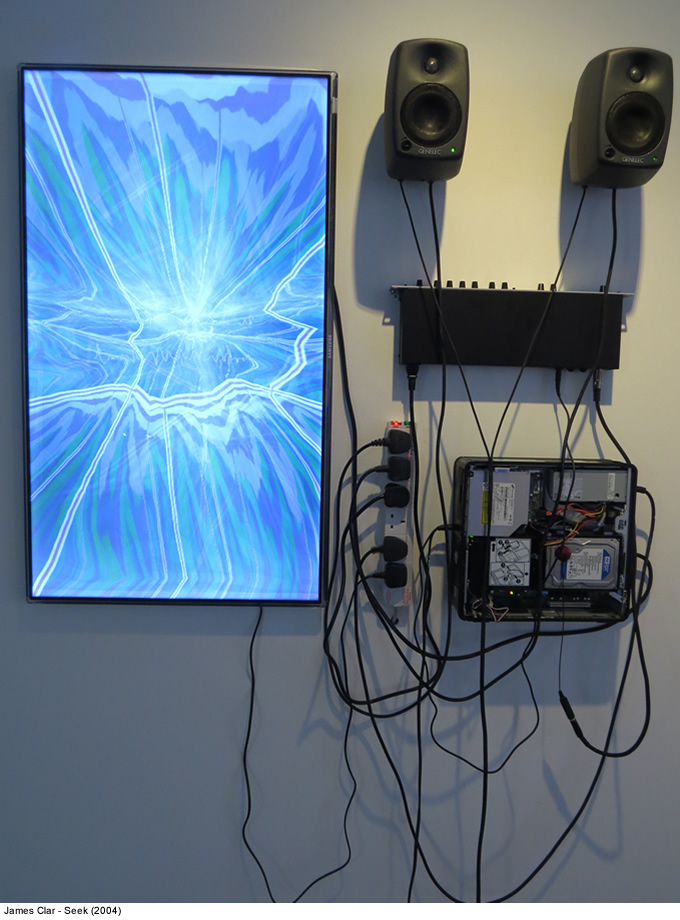 Calling attention to the computer’s act of memory processing, Seek (2014) is an installation that amplifies and visualises the action of a computer searching for data, by animating the sounds of the hard disc through live visuals on screen.

Continuing Clar’s investigation into the tenuous basis of our perceived reality, Space Is A Hologram (2014) is premised on the idea of the “space pixel”. A strand of scientific research proposes that the universe’s information may be contained in the same way as pixels on a screen and that the natural “pixel size” of space is roughly 10 trillion trillion times smaller than an atom. Our notions of space and form are thus collapsed into a two-dimensional hologram. Through lines of light and colour, the work suggests the planes of a three-dimensional cube, prompting the optical illusion of a real spatial cube. The simplicity of triggering this jump between two and three-dimensionality, encourages us to question that perhaps it is not so great a leap to think of our 3D reality experience as conjured from a 2D hologram.

In Dance Therapy (2012), a 20-minute video installation which projects edited footage of break-dancers, Clar has motion-stabilised the head movements of the dancers so that their heads always appear in the same place. Hanging over this area, a spinning disco-ball appears to cause the light from their heads to “explode”, offering a languid, trippy reflection on spatial behaviour.

The Other You (2014) takes its starting point from the theory of parallel universes within quantum mechanics. The theory holds that, given the universe is infinite, there must be an infinite number of histories just like ours, and if it were possible to travel far enough in any direction today, we would eventually come across a universe identical to our observable universe right down to the last detail. According to calculations, to find your closest identical copy from another galaxy you would have to travel 10^ 10^ 28 metres.

Forming a poetic counterpoint to many of the works on view, Rain Under Lamppost (2014) presents an animated video projection, which replicates the action of falling rain, through the cone of light from a lamppost. The work hints at volumetric space and the interstices between cartoon and reality. 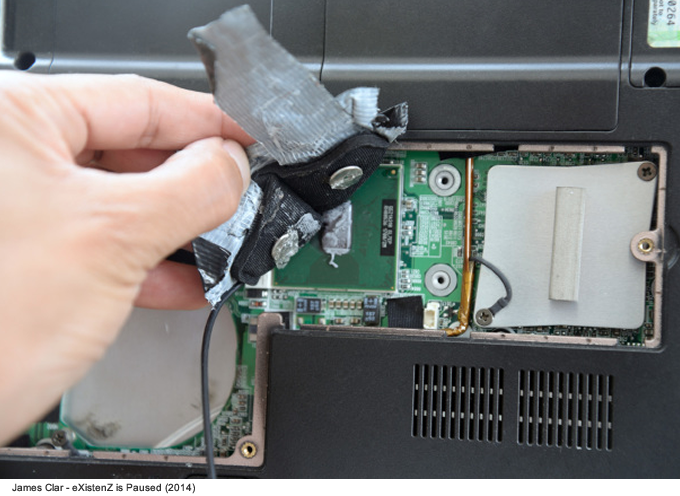 James Clar, born 1979, lives and works in New York. Working with light as a sculptural form, his work explores the effects of media and technology within our culture. Clar studied film and animation at New York University, where he gained a BA in Film/3D Animation and an MA in Interactive Telecommunications. His major interest is in new technology and production processes, which he uses as a medium, while analysing and critiquing their modifying effects on human behaviour.

Since 2006, James Clar has had solo exhibitions in Barcelona, Dubai, Hong Kong, Berlin, Lyon, Brussels, and Memphis. He has also shown in numerous group exhibitions at prestigious inter- national institutions including MoMA PS1 and the New Museum in New York; the Digital Arts Festival, Tokyo; and at Somerset House, London. His previous commissions include works for Fraport head- quarters in Frankfurt, Germany; the Rolex Tower, Dubai; Core Research for Evolutional Science and Technology (CREST), University of Tsukuba, Tokyo, and the FedEx Institute of Technology/Lantana Projects, Memphis. To mark its 10th anniversary, London-based not-for-profit art foundation Parasol Unit commissioned Clar to create an outdoor work to explore the phenomenon of light, on show in the terrace until 8 March 2015.