Searching for the unexpected: an interview with the visual artist Laetita Morais 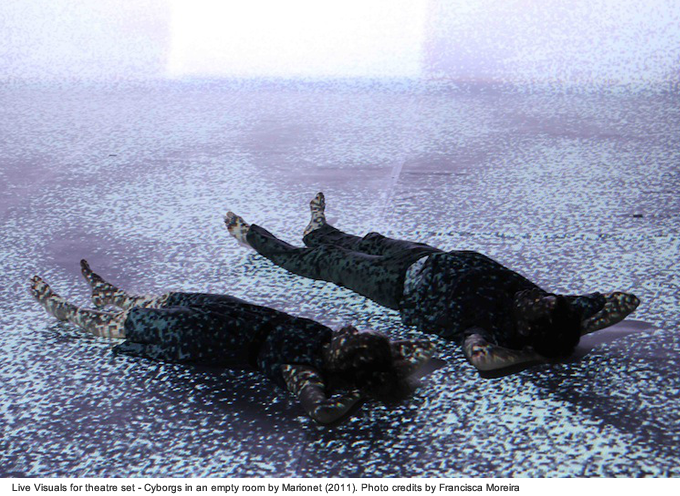 Laetitia Morais is a Portuguese visual artist, professor and researcher. Her solo and collaborative works (across areas of knowledge) mix media (mostly film and installation), follow themes of observation and distance and extend from sound and image to spaces, translating ideas into events, objects and environments. Laetitia has been presenting her works in art spaces and festivals worldwide.

Each project unveils a process as dialogue between polar opposites, such as appear/disappear, absence/presence and inertia/velocity. In these themes lays the departing point of reflection, which later take form as an exhibition or a live audiovisual performance.

The main aim is to move towards the unknown, in search for the unexpected, where paradoxes are revealed, denouncing historical events and fictional narratives. Because the scope of Laetitia’s work is broad, we will focus, for the purpose of this text, on live performance. 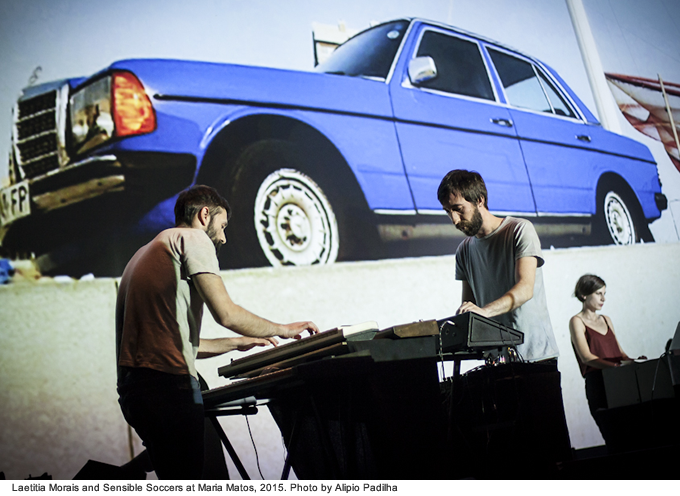 Ana Carvalho: Both forces, inertia and velocity imply a relationship between two or more elements and a point of view. Although in the composition of a bi-dimensional object, such as a poster or paint, both can only be suggested, but in works of moving image they are compositional elements. And this is a point of introduction to your live audiovisual performances and simultaneously to our text. Relating the fixity of the object to the ephemeral quality of the performative moving image, how have both inertia and velocity transformed in your work to become subjects for reflection?

Laetitia Morais: The enunciation of concepts, such as inertia and velocity, has the purpose to define my work as a set of moments of allocation. Inertia and velocity are opposite states of movement, however, they may achieve the same intensity. That is, by disrupting the sight – being either too slow or too fast to be perceived – presence is hidden, which is a major state for the comprehension of the surroundings. Our own perception of reality is always made by glances and bursts of information.

This means that inertia is also part of velocity and it is present in each of its segments. They both converge in many situations that are barely noticed and should be reflected upon. The objective of my work is to convey these relations within art, either by documentation or representation, through non-linear processes, present in continuousness and “afterness”.

What I mean with this word is the prolongation of an experience after it actually happened. (The same way we look at photos after a voyage to re-enact and re-transform the moment.) “Afterness” is not just an effect, constrained in its post-position; it is a dust, part of the main matter. Taking film as example, the persistence of an afterimage is approximately one sixteenth of a second in the retina, explaining why the black spaces between each frame are not seen.

A film projected at the minimum speed of 16 frames per second will be perceived as a sequence despite the fact that each frame is a single and frozen picture in time. Consequently, technology has brought new potentials to the use of moving-image and real-time processing.

In the The Aesthetics of Disappearance, Paul Virillo says that “(…) technical chance had created the desynchronizing circumstances of the picnoleptic crisis and Méliès – delegating to the motor the power of breaking the methodical series of filmed instants – acted like a child (…)”, revealing the attraction to these automations. In fact, it is incredibly challenging for an artist to be able to freely improvise with sources while displaying and position artefacts.

This is also one of the main reasons why film as a medium is so relevant in my work. As a visual artist and performer that improvises for an audience, it is important to hide or to reveal presence the same way a magician does. To not be noticeable may be as challenging as the action itself – to simultaneously provoke disappearance and unveiling. 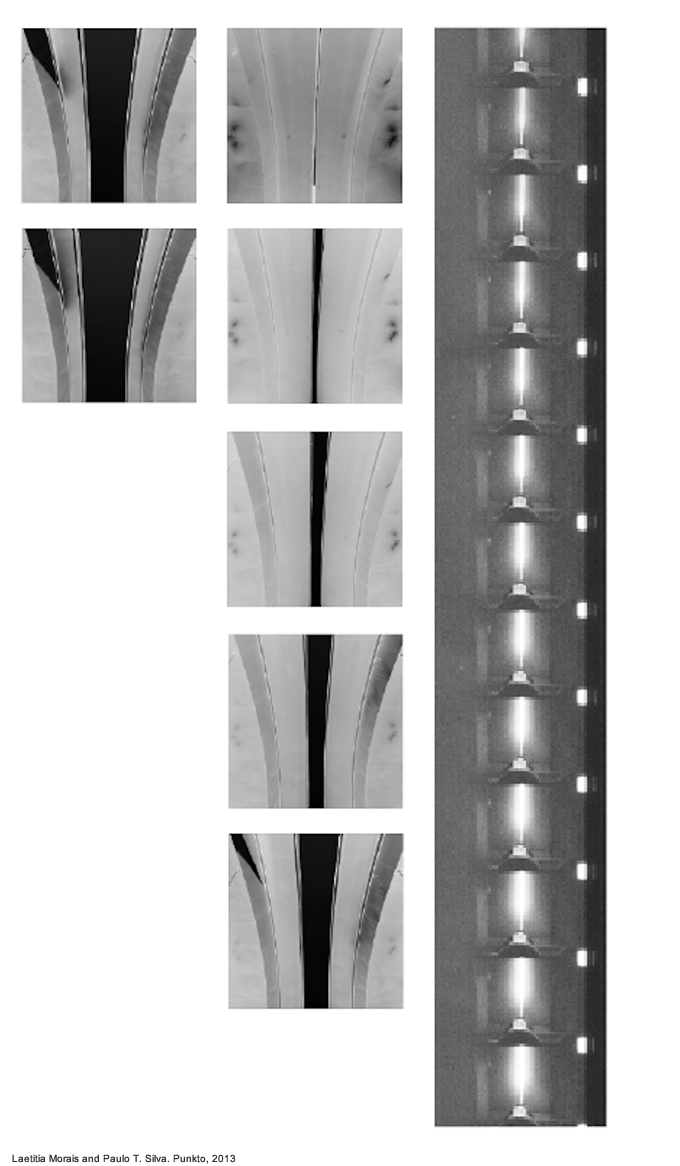 Ana Carvalho: Both the performance (that is, the meaning contained in the presence of the artist) and the resulting image projected, gradually develop, in your work, from collaboration with other artists. Could you explain more about what is your aim when working with other artists and how the collaborations are expressed in the approach or reflection upon the different themes, technologies and results?

Laetitia Morais: The success of a collaborative work depends on empathy between the elements of the group. The involvement on creative work is absolutely necessary, and it is the first characteristic that I tend to pay attention to when looking for a collaboration. The interest of each particular collaborative work is usually caused by an intention to expand a determined project, either by adding a different medium to it, such as music or literature, or by crossing different concepts or languages, which frequently happens when collaborating with other visual artists.

In any case the collaboration enriches a line of thought and consequently pushes the results to unexpected levels and formats. Often there is a common interest to explore, mostly a purpose or a theme rather than a technique. The use of each medium in particular is usually chosen as a vehicle to express an idea and is never imposed onto the artwork.

Also, by collaborating, I understand that each part must have its own framework, developing freely and independently, towards a common purpose, which may signify that each will use his or her own language. This means that rules are not imposed and the relation is always friendly and is commonly developed and intertwined with relaxed conversations. A complete feeling of respect and trust in each other’s work, I think, is fundamental to achieve high quality results.

I keep ongoing collaborative projects for more than 7 years, even if meetings and performances are occasional. Examples are the collaborations with music composers Zavoloka and Vitor Joaquim and with the theatre company Marionet. With all of them, I do live visuals and they play/perform their medium such as music or acting. When working with Zavoloka, who lives in Ukraine, we usually develop our ideas through online conversations and file exchanges and we publicly present the result without previous rehearsals or meetings, which is for sure very demanding and requires a clear domain of our intentions.

What stimulates me the most with these collaborations is their performative character, which adds an improvised and unexpected criterion to each of the pieces/performances. By collaborating with others I never control what happens. In that moment is the search for the synchronized intuition that I find most pleasant. 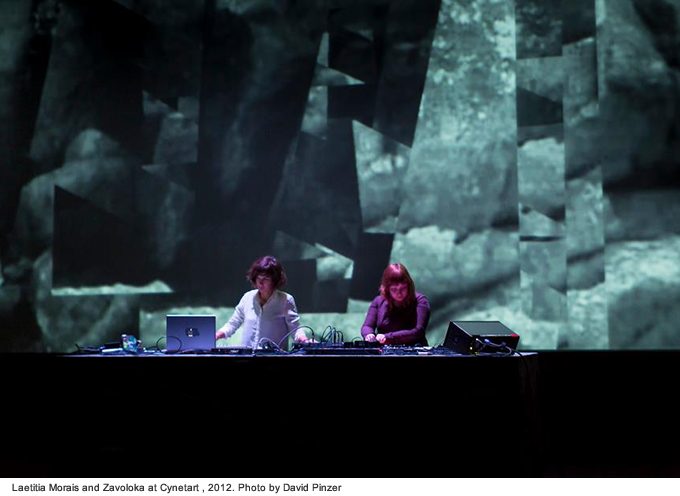 Ana Carvalho: In the long term, long distance collaborations, presence is almost restricted to presence on the stage. Referring specifically to your work with Zavoloka, is improvisation an element of your work together? If so, in what ways does improvisation relates to exploring the unknown and how do you incite the unexpected to happen?

Laetitia Morais: Because we are dealing with common ideas, but we don’t pre-give a fixed result, none of us knows what will actually happen. The unexpected is processed during the performance in a way that I may change values or visual compositions depending on Zavoloka’s improvisation and vice-versa. It happens that, regularly, we have to talk during the performance, to check how we will proceed or when will we end. This way, the process is clearly exposed.

Many times spectators commented that they could perceive those moments and felt nicely integrated within the dialogue. It is not a fragile structure, rather the opposite. We are both improvising and relating to each other, which turns the results surprising and nourishing for us as authors.

Ana Carvalho: Is there a connection between the performances, within your collaborations, for example, and objects as artworks?

Laetitia Morais: Yes of course, in a way I aim to represent in every work some kind of affectivity, both by relating with others and by materiality or translocations. For example, to move into remote areas, underlies a very unique and comprehensive relation with the surroundings, the intangible world and transversal to any conception of reality.

The emptiness, the unknown territory as abstract nature, challenge the mind to confront with the unfamiliar (in a social context where everything seems spread and recognizable), therefore, to loose the preconceived references, as an unlearning process, will eventually enable a consciousness about the potential inherent in forms. Proximity or distance is what defines the perception/affectivity of the viewer, changing his notion of scale, material, shape, etc. For this reason, it is the condition of a reality that operates the uncertainty. 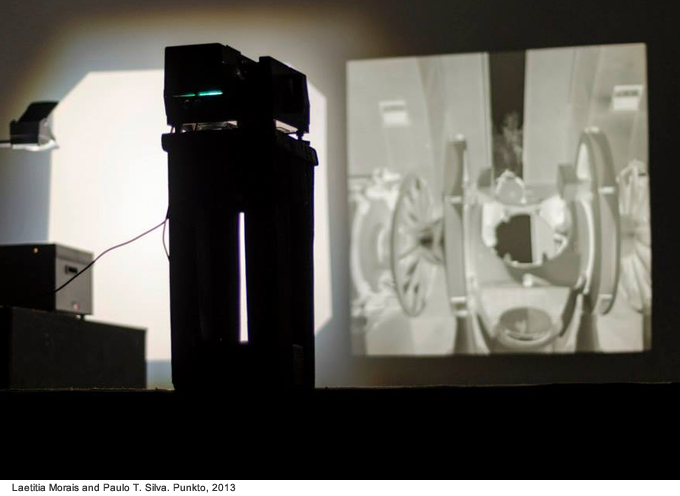 That’s the reason why I approach concepts such as inertia, speed and distance. Regarding those experiences, I expect that my works, independently of their format, provide a similar sense of unfamiliarity, promoting multiple emotional layers that one can unfold indefinitely. Then, when I work within a collaboration, other criteria emerge, media and aesthetics may be adapted, but it is crucial to me that my main motivations to produce artwork are always present, And that is, to transmit affectivity through forms.