Score as a thinking tool. Interview with Samson Young

Samson Young is an artist, musician and composer based in Hong Kong, with academic education in music, philosophy, gender studies and with a Ph.D. in music composition.

His body of work takes the form of different media, connecting music to visuality through video and drawing, and extending the capacities of these two media together in space and time through installation and performance. In its multitude of expressions, Samson Young has presented his work at many venues, galleries, festivals and museums worldwide.

Following a particular interest in composition, this interview permits an insight into scores as structuring and organizing tools of experience and means to convey a reflective process of attempting to understand the contemporary social constraints and possibilities. 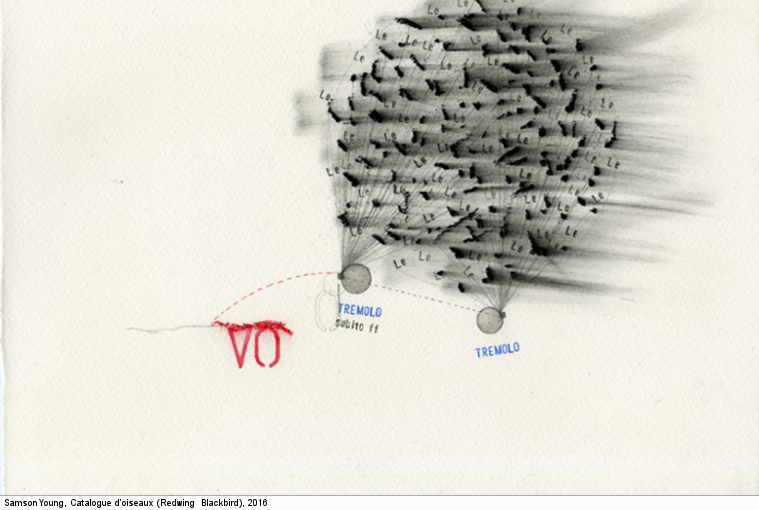 Ana Carvalho: By looking at the documentation of your project So You Are Old By the Time You Reach the Island came to my mind Kandinsky’s “The Spiritual of Art” and what moves, from within, the artist to create. In this work, but also in other works, you use a wide range of media, from music, video, installation to radio broadcast. In this multiplicity of media, what is the importance of music?

Samson Young: I do not want to exoticize music, or single it out as distinct from other forms of expression, I think there is the danger of over-romanticizing music and, by extension, the sense of hearing; I see, hear, and think all in the same body. All that said, it is also true that my training in composition structured my perception of the world in certain specific ways, which I sometimes try to resist and fight against, other times exploit. So in that sense music is not trivial either.

Ana Carvalho: Connections is a term that comes constantly to my mind when experiencing your work, either through the use of bells in different cultures: For Whom the Bell Tolls: A Journey Into the Sonic History of Conflict, and through conversations between people: Mobile Radio Broadcasts. The term also comes constantly to my mind when looking at your scores/drawings as they situate between formal notation and graphic notation, constantly reminding me of Treatise by Cornelius Cardew. Do you have intention to bring to attention of the audience different ways of connecting but also of approximating, understanding and dialogue?

Samson Young: It’s not a conscious effort on my part, but because so much of my work is about this idea of transcription, especially transcriptions of sound, I think when people approach these transcriptions there’s often a desire on the audience’s part to reverse that process of transcription, to imagine the sound that was transcribed, which of course is a very fair thing to do. With Treatise or other graphical notation works I think the premise is quite different – these operate as scores, meaning that there is an implicit assumption that there will be a process of translation and realization (by a performer / performers); whereas in my transcriptions, the notation come into being after-the-fact, almost like phonographs.

To offer a shorter answer to your question. I can only offer the assurance that there is some sort of internal structure and consistency to my process, but there is always going to be an unbridgeable distance between my hearing and yours. 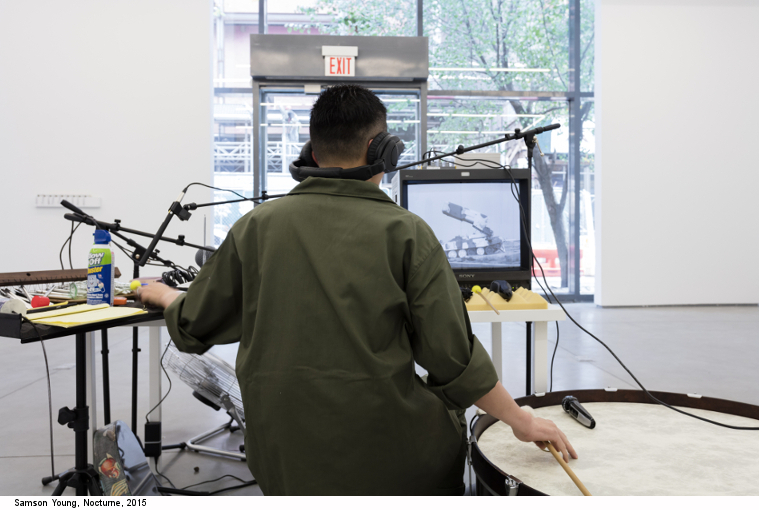 Ana Carvalho: On your text titled “On drawing sound” you ask the question “What does it mean to be faithful to music?” Through this question you connect to John Cage’s drawings. I would like to direct the question to you, looking at your drawings, what do they convey of your faithfulness to music?

Samson Young: I think maybe I’d already touched on this issue in my answer to your first question. But I don’t think I am faithful to music, or to anything in particular for that matter. The statement was actually John Cage’s, not mine – and you need to see Cage’s statement in historical context. First of all I think he was trying to process his relationship to people like Schönberg and the folks at the Darmstadt School, and perhaps feeling slightly insecure about his place when his work is considered alongside that of the German-Austrian musical avant-garde; secondly, he was fearless and crossed all kinds of borders, so it is easy to forget that he lived in a time when these boundaries were actually only starting to break down, at least in the concert hall. 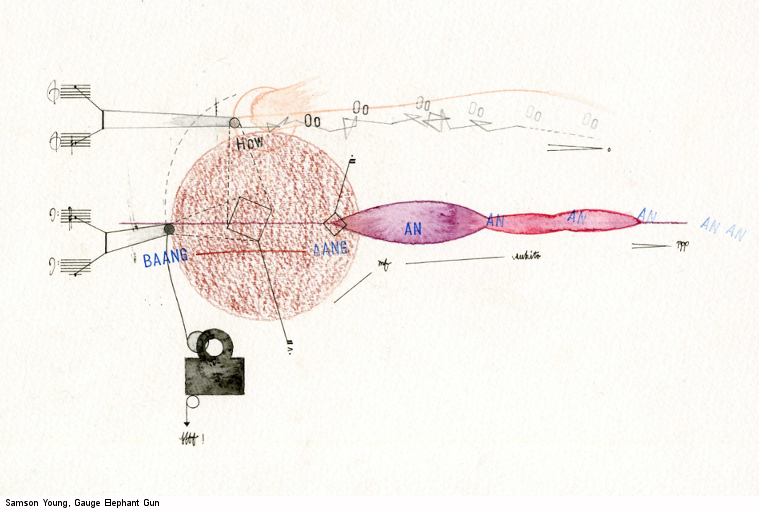 Ana Carvalho: Having in mind your scores as translations of experiences, in what ways composition encompasses multisensoriality?

Samson Young: For me composition is just a way of structuring and organising, so it is not a strategy that is limited to music and sound. But even if we are talking about composition as in scripting of events in the more traditional sense, it had since a long time ago ventured outside of the realm of the purely sonic. To cite a more familiar example, George Crumb’s scores are basically scripts for a multi-sensorial theatre. And certainly as an audience, I am just as interested in the theatre of the conductor and the musicians in synchronicity as I am in the sound and music that is being produced.

Ana Carvalho: During the process of making a score, do you think about its interpretation? If so, have you created a score that is impossible to be performed?

Samson Young: I don’t – as soon as I begin to think about interpretation it limits my imagination. I need to make really quick decisions and so sometimes I rely on the troupe of traditional musical notation just because they are familiar. I do not encourage or proactively organize the interpretation of my sound transcriptions, that said, I will not forbid musicians from doing so either. 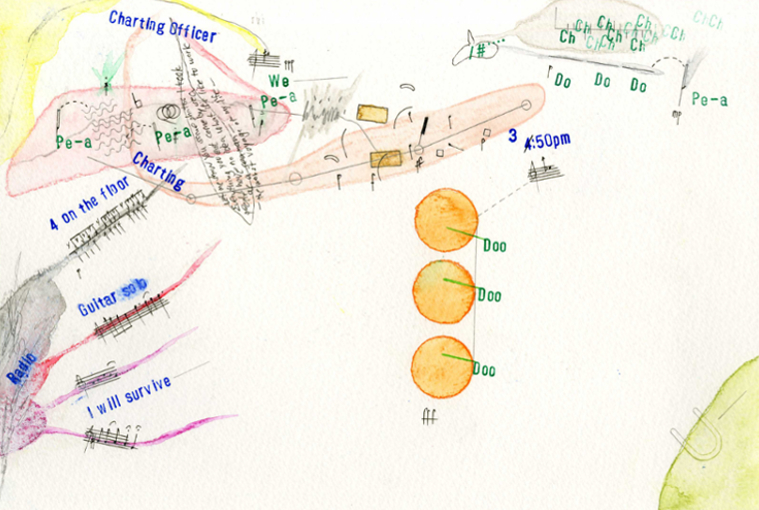 Ana Carvalho: It is apparent the connection between your chosen locations, equipments and devices, part of problematic social-political situations, and its role in many of the art works you create. In this transfer, from the original context to the artwork, the elements become part of something different, beautiful art works. To conclude the interview, having in mind your own practice, I would like to ask what is, on your understanding as an artist, the role of art in our contemporaneity?

Samson Young: Art making is for me a way to process information and digest complicated issues, some of these issues are political. It’s a thinking tool. But I am not attempting to sway opinion by distilling a singular insight. When I am making a piece, my opinion on a subject is often super confused and contradictory, and I allow the messiness to come through in my work. When I finally emerge from this process, I might begin to formulate an opinion and that might in turn affect how I vote, who I choose to work with, how I run my non-profit, etc., which is a more modest goal but it is not trivial either.