Saso Sedlacek The big switch off 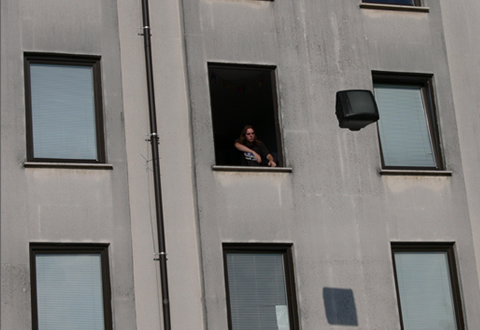 Sašo Sedlaček explores social phenomena that are part of our everyday life. His attention is focused particularly on those topics that we usually push aside, for they represent the “impure” side of the otherwise bright reality.

Poverty and waste are certainly the key terms of his opus. These two topics, according to Sedlaček, are of key significance for our future. In a series of projects developed over the past ten years, he has shown various innovative and alternative modes of functioning (especially the practice of recycling) and he has emphasised the responsibility that should accompany our interfering with the environment and our making decisions regarding social issues.

The video project The Big Switch Off is part of this series; it will be publicly launched on Monday, 25 July 2011, at the Aksioma Project Space in Ljubljana, and in Autumn, as part of the retrospective exhibition of Sašo Sedlaček’s work, at the Gallery of Fine Arts Slovenj Gradec and at the Rotovž Exhibition Salon at the Maribor Art Gallery.

The project deals with the question of what is waste and what is litter. What we consider safe waste, which we recycle, will become litter proper in the Third World, where it will probably end up. In the “Essay on Litter: Wiki-Garbage Management” in Dnevnik’s Objektiv, Luka Omladič says that litter consists of those things that annoy us, the things that should not be where they are. Like an alien, they stand out from their surroundings and they make it disgustingly clear that someone has tossed them away and that they will remain there for a long time. Yet, not all litter is waste, Omladič says, at least not in the sense that would deeply annoy us. And cast-off television sets simply do not annoy us. In fact, it is precisely the migration of waste that constitutes major hidden pollution, and this often happens far away from the developed countries that produce waste. It is there, far away from the developed countries, that waste becomes litter. There, their characteristics become unpleasant again and stand out from the surroundings.

Sedlaček makes visible the relation between waste and litter. Using the old analogue technology, which has been increasingly displaced by the new digital technology, he produces litter here and now. Instead of “safely” recycling televisual technology, which is becoming obsolete due to the new technological paradigm, the introduction of digital signal and, consequently, the mass replacement of analogue television sets with LCDs and plasma TVs, let’s rather publicly break it into pieces. Let’s do what we are going to do anyway, one way or another, sooner or later – let’s do it together and publicly. 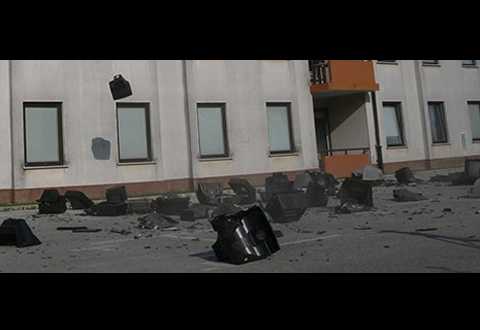 Due to the introduction of digital signal in 2011, which has replaced the analogue signal, the West has witnessed mass destruction of old technology. Cathode television sets, TVs without digital converters, VHS and DVD players are a thing of the past, for they do not support new technology. Sooner or later, we will all be forced to replace the old with the new. Already now, the sellers of contemporary electronics keep offering us replacements of this kind. Yet, the story of old technology is not over when we replace old devices with new ones. And it does not end at the electronics dumping ground either. In fact, this is where their journey only begins. Old electronics is being exported into Third World countries, however, this is already an entirely different story…

Sašo Sedlaček is, no doubt, one of the key authors of contemporary art in Slovenia. He has received several awards (OHO, Vida 11, Spaport, Zogo Toy, etc.); he has been artist in residence three times (in Germany, Japan and the United States); he has had exhibitions in Slovenia, Japan, Taiwan, USA, Austria, France, Belgium, Italy, Serbia, Russia, Estonia, etc. – including established exhibition venues such as the Secession in Vienna and the Lentos Museum in Linz – and he has participated in large international biennials (Taipei, Taiwan 2008 and Ogaki, Japan 2006) and festivals.

In Slovenia, he has recently problematised the sell-out of frequency space (Manifest, 2009, and Infocalypse Now!, 2007) and he is particularly recognisable for his interventions into consumer Meccas. Using bricks made of printed propaganda materials, he closed the entrances to department stores in Ljubljana (Just Do It!, 2003) and built a pavilion for eavesdropping and dwelling in BTC City (Loop, 2004); in 2006, he took Beggar – a robot for the materially deprived, which he lent to the homeless people of Ljubljana the following year – for a walk around Citypark and the streets of Tokyo and Taipei; etc.