Rotate A series of unexpected parallels 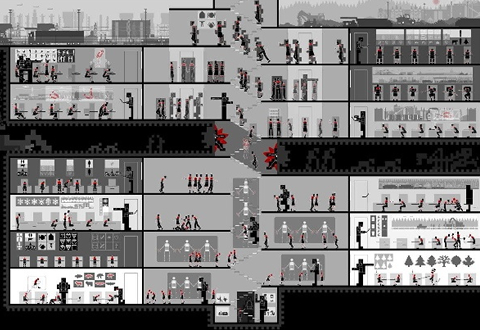 ROTATE is a series of informal parallels that make unexpected relationships. For the next two months a series of links and connectivities will be made with rotating works on display.

At first sight it is not obvious to think of a common ground between the radical hard-edge, absolute non-representational paintings of Robyn Denny, and the detailed epic narratives of Chad McCail charged with political activism and theory. Both act as non object though, both redefine geometry, both turn scale into language. Both have a dynamic inner metabolism.

Denny produced his landmark painting Go Between in 1965, this work represented Britain at the XXXIII Venice Biennial in 1966. The surface is made of multiple layers of oil paint that by their intensity and depth of colour, produce a space, somehow immaterial, deeply perceptible although not immediately apparent. Nothing is illusion, everything is about painting. There is a sort of a square within a square, with an arabesque, suspended like a key, except than none of it corresponds to any material association. It is only about abstraction, its relation to form.

Chad McCail produced his seminal Monoculture as part of a long reflection on compulsory education in the Western world. Apparently the most benign and civilizing institutional process, compulsory education was designed for domination, colonization, and industrial demand. The remnant of its structure still haunts our education system, and the society that we are. By representing the whole alembic of the school machinery into a black and white montage of cubes, like a lego construction, he re-uses the language of the supremacists onwards, and with them the whole heritage of systematic abstraction. 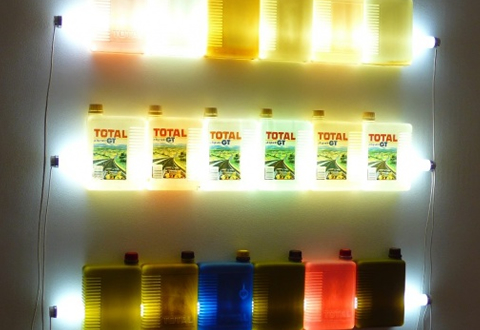 In this parallel between one of the most abstract works ever made in Britain and one of its most political artists, aspects from both emerge that were unsuspected. It reveals the many implications that major art carries in its strand, well beyond its apparent family, school, generation or movement. Comparisons thicken as other works pull their own logic into the game of parallels. Notably Michael Stubbs ‘liquidises’ abstraction, battering its concept in a post-modern apparent laissez-faire, free of any codes, not scared to pour material and let accidents decide. His assured hand is a perfect natural moderator for anarchy. Dealing with post-abstraction, tableaux, forms and illusions, the work is in fact deeply related to the rigorous hard-edge visions of Robyn Denny. From the other side of the room, his material freedom is also finding odd echoes in Chad McCail‘s cubical people buzzing around.

Perhaps the one thing that brings fusion to this group is the work of Bill Culbert with his mix of Dadaist found objects, constructivism and electrical sculptures. The plastic bottles of engine oil found after use are pierced through by a neon tube and their bodies become translucent colours radiating light and forms, as abstract as a slick paint surface, playful and ground-breaking, anarchic, devoid of rules, yet in perfect harmony with the rest of the displays that show equal ability to forge their own momentum.

Next to it stands a key early work by Grayson Perry, in itself not too concerned about conventions or strong language, wrapped in its own appearance of a pot. Steven Geddes brings craft and irreverence to a climax with his exquisite porcelain skulls and lavish sculpture representation of a provocative version of a Vanitas.