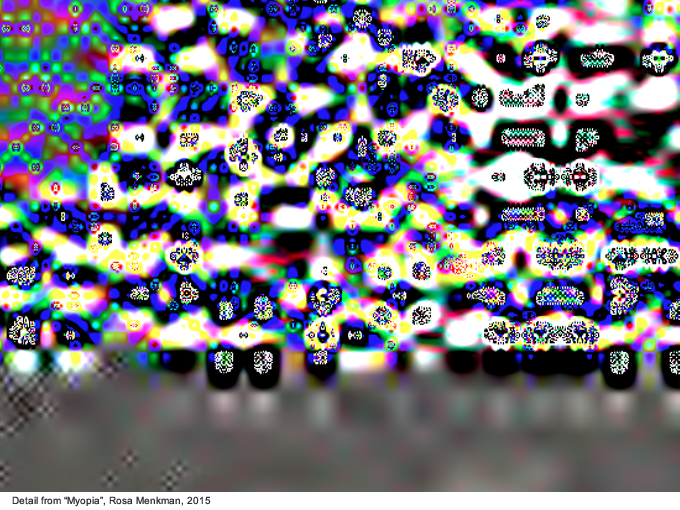 “Everywhere we imagined ourselves standing turned into a cliche beneath our feet” – Naomi Klein, No Logo, 1999.

Resolutions inform both machine vision and human ways of perception. They are the material of everyday life 1, ubiquitous, while humans have gone mostly oblivious. iRD strives for a radical materialist re-(re-)distribution of the sensible 2. Even the most glitchy-glitch is just the vernacular of an already present, not evenly distributed future. When we walk inside these futures we find ourselves momentarily stuck inside a pocket of ambiguous “freespace”, a fountain of inspiration and curiosity. Until we find resolution.

Rules or protocols, change data in order to store, show, move and connect between technologies. Protocols, together with objects and their materialities, form the resolutions that make technology run smoothly3. But these resolutions form not only a solution, but also a compromise between multiple underlying media properties. A resolution is not a neutral facility but carries historical, economical and political ideologies. The cost of all of these media protocols is that we have gradually become unaware of the choices and compromises they represent. We are collectively suffering from technological myopia where these qualities have moved beyond a fold of perspective. 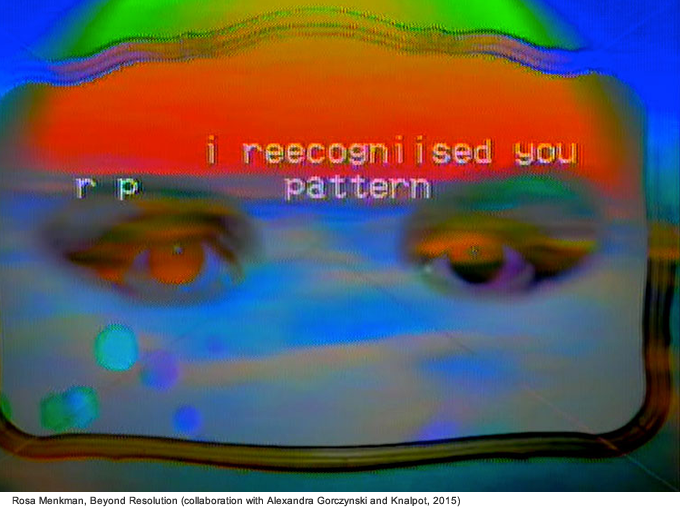 Have we become bad at constructing our own resolutions, or are we just oblivious to resolutions and their inherent compromises?

The iRD calls attention to media resolutions and does not /just/ aestheticize their formal qualities or denounce them as “Evil” 4. iRD intends to expose methods of “creative problem creating” 5, to bring authorship back to the actors involved during the building of a “resolution”.

While the gospel of resolutions sings about new standards implemented through corruption, iRD displays forms of vernacular resistance based on misleading, false, or ambiguous data and maybe a chanting jabberwocky, venturing along the bootleg trails above a Sea of Fog.

Rosa Menkman (b. 1983, Netherlands) is a Dutch artist and theorist who focuses on visual artifacts created by accidents in both analogue and digital media. The visuals she makes result from glitches, compressions, feedback and other forms of noise. Although many people perceive these accidents as negative, Menkman emphasizes their positive consequences: these artifacts facilitate an important insight into the otherwise obscure world of media resolutions. Since 2007 Menkman performs worldwide with her (audio)visual work. In 2011 Menkman released the ‘The Glitch Moment/um’ with the Institute of Network Cultures.