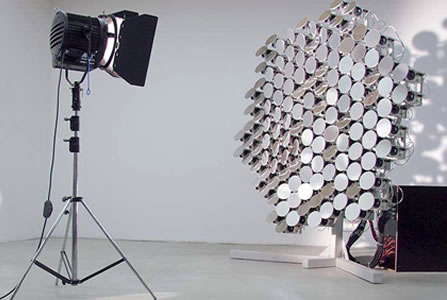 GEORG-KOLBE-MUSEUM - BERLIN
UNTIL 6 OF SEPTEMBER 2009

The exhibition “Romantic Machines” explores the emotional and aesthetic dimension of contemporary Kinetic Art. It brings together nine contemporary positions in the form of a snapshot, with works that test our physical and psychological relationship with technology.

Zilvinas Kempinas from Lithuania is taking part, as well as the Scandinavian artist duo Elmgren & Dragset, who devised their respective countries’ national pavilions at the Venice Bienniale this year, as well as the shooting star Michael Sailstorfer from Munich, to whom the Schirn Kunsthalle in Frankfurt dedicated a large solo exhibition last summer. The exhibition tour will begin with the video “Der Lauf der Dinge” by Peter Fischli / David Weiss, initially presented in 1987 at documenta 8, where it was quite a spectator magnet. This video’s ambiguous humor and serious play are important points of refer-ence for many of the artists presented in the exhibition.

As is the slapstick irony of the works by Robert Barta, an artist who has moved from Munich to Berlin and has been invited to the upcoming Rohkunstbau exhibition in Potsdam. Further participants are Johanna Smiatek, enriching the exhibition with a decidedly female perspective on the Kinetic, the Israeli newcomer Ariel Schlesinger and the Viennese technology-artist Thomas Baumann, who kept flooding the forecourt of the Basel art fair last year with his “wave machine”, as well as Julius Popp from Leipzig, whose science-based artwork has found international recognition in recent years.

Romantic stands for the prevailing tendency in this context, toward emotional intimacy, toward the magical, beautiful, mysterious, inscrutable and absurd. The seemingly animate kinetic objects are directed at our fractured relationship with the world of machines and technologies that we have made our home. Our life is shaped by the dependency on machines, with their inner machinations usually domesticated and hidden behind a humanizing front. The art of moving machines and equipment deconstructs this front and imbues these things with a sometimes eerie life of their own. The exhibition’s artists broach this independent animus in subtle, ironic and self-reflexive ways, carried by the fascination for the immediate and astonishing effect of kinetic pieces of art. 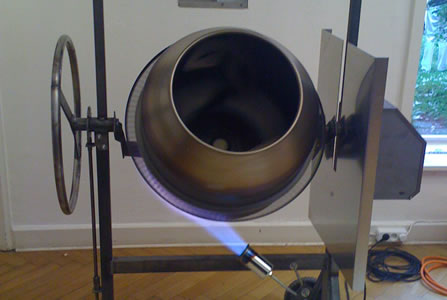 Kunstkammer at Georg-Kolbe-Museum, No. 3 – Christina Doll

For the duration of the exhibition Romantic Machines – Kinetic Art of the Present, Georg-Kolbe-Museum shows new works by Christina Doll in its Kunstkammer project-room series. In recent years, the Berlin sculptor (born 1972) has concentrated on the currently somewhat neglected genre of full-body portrait sculpture. In the garden, Christina Doll presents her current work series of four monumental portrait sculptures made from concrete, among other pieces. The common at-tribute of these works, beyond their size, is the unadorned treatment of corporeality, deviating noticeably from conventional ideals of beauty. Christina Doll imbues her figures with a natural illustrative sense of dignity that sets them apart from the pathos of traditional monumental sculpture and creates a calculated contrast with Georg Kolbe’s sculptures on permanent display in the garden of the museum.