Rodrigo Carvalho’s practice and research result from the possibilities of the combination within the triangulation between sound, image and movement. He is a very prolific artist with work mostly developed and presented under the names of several audiovisual projects. For each project, Rodrigo Carvalho join skills together with other artists, such as sound artists and dance groups.

The form of his body of work vary as well as the context, from live performance at MUTEK in Barcelona to outdoors light show at Avenida dos Aliados in Porto and several dance performances in Austin. His visuals are malleable and adaptable to the project and environment but their aesthetic details identify their author.

His interest in interaction brings to the surface the possibility of technology as a vehicle for people to express and engage with each other. Underneath, lies an interest in sci-fi and utipias, in film, literature and art. The interview gives account and details of all these themes and is a good introduction to Rodrigo Carvalho’s work. 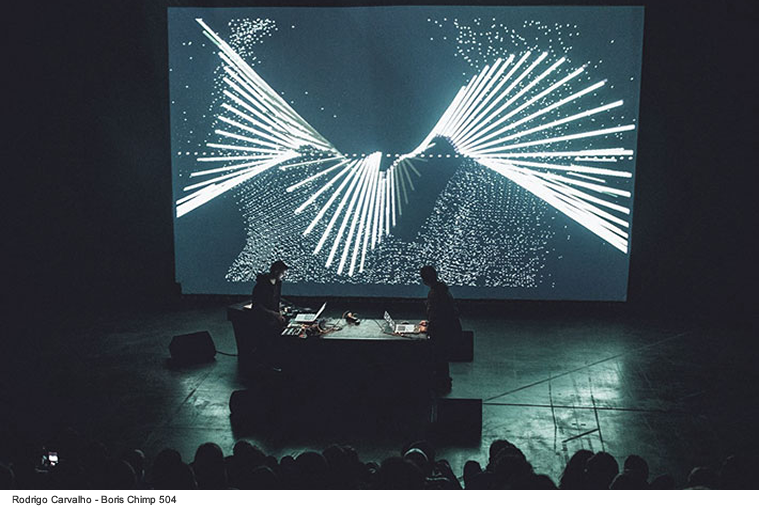 Ana Carvalho: You use mainly black background, which sometimes is just the dark of a tridimensional space, and lines or areas of light sometimes colored but mostly white. From the visual work for performance you did, I would like us to point to the project Boris Chimp 504 (2010-…)[i] as example to ask about aesthetics in your work. Although some figurative elements are identifiable in Boris Chimp 504, abstract forms constitute mostly the project. How does an idea, in this case a sci-fi story, translate into visual result (colors, forms and space)?

Rodrigo Carvalho: In fact most of my visual work, on Boris Chimp 504 and on other projects, reflect that aesthetics: black & white, minimal, simple shapes, points and lines. I identify myself with that visual identity and I feel comfortable creating with it. Many of my favorite artists and artworks share similar aesthetics, like Rioji Ikeda, U.V.A, Alva Noto, Joanie Lemercier, Nonotak, Adrien M & Claire B, and a big etc. Going back in time, Larry Cuba’s Calculated Movements (1985)[ii] is one of my favorite motion pieces ever, and Manfred Mohr, among many others. Dark atmospheres, dystopian near-futures, cyberspace and many other sci-fi themes are also strong influences.

To what concerns Boris Chimp 504 project, there is a very specific narrative about Boris’s space travels and findings, as result, sound and visual imaginary are very abstract. I guess that if sound and image were too figurative it would spoil the magic. This way you can set the base story and then let the audience’s imagination travel through deepspace. However, in spite of the abstract forms, all the visuals suggest spaceship interfaces, orbital trajectories, traveling through hyperspace, morphing landscapes, creatures from the deep space, and etc. The visual work by Gmunk[iii] on sci-fi movies like Tron: Legacy (2010) and Oblivion (2013) is also a strong reference for me. 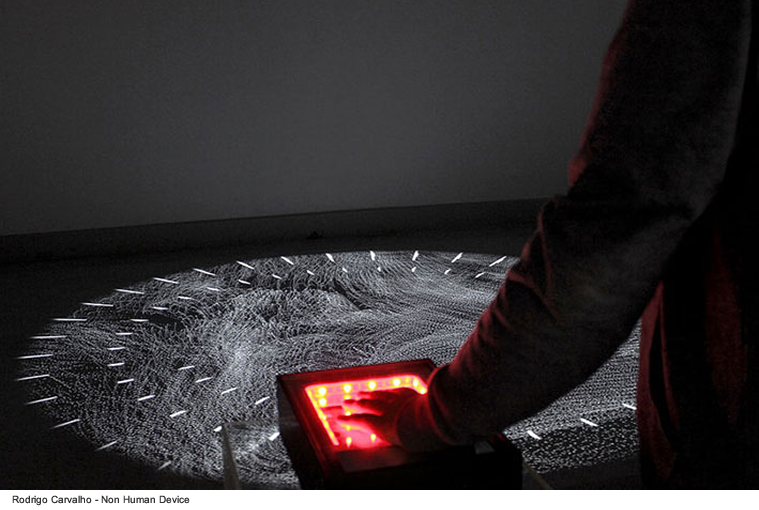 Ana Carvalho: Could you explain further your interest in combining several means of expression through interaction with machines (hardware and software)?

There has been an exponential increase of interactive projects in the last years developing from the relationship between humans and machines. On my blog, Sound+Visual+Movement[vii], I have a collection of posts under the name Kinetic Structures[viii] where a huge set of nice projects related to interacting with machines can be found.

Below, some of my favorite recent projects with humans and machines on stage:

// In Inferno (2015)[ix], by Louis-Philippe Demers and Bill Vorn. Here a group from the audience are the performers on stage. They are wearing a mechanical exoskeleton, which they don´t control.

// Dancing drones experiments (2015)[x] is a series of videos from Rhizomatics studio with explorations on interactions between flying drones and the human body. In those videos we can watch a series of experiments, that explore interactions and developing human-drone choreographies, flying-drones as an extension of the human body, and also flying-drones performing alone by themselves.

// Pattern Recognition (2016)[xi], with visuals by Memo Akten, is a performance for two dancers and an array of robotic lights, where the robotic lights learn how to dance and perform autonomous movements based on their own artificial intelligence. 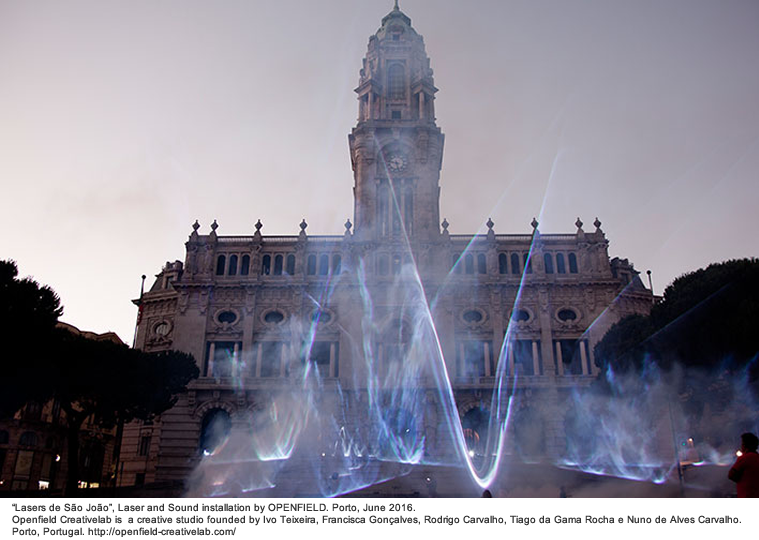 Ana Carvalho: The themes of your research and the related blog are at the basis of my third question. In your experience working on the performative practices that combine sound and image how does the process change when you include the movement of the body?

Rodrigo Carvalho: In my research I defined a triad of three domains: Sound+Visual+Movement that exchange input and output signals between them. In my work and research I look for interesting relations between these three domains. In some cases, sound is used to generate images, in other cases images parameters are used to generate sound, and in many dance performances, movement captured from dancers is used as motion data to control visuals/sound. I am constantly looking for new and unusual setups and relations.

Related to the movement of the body, it is very interesting to work with dancers because they start to learn how the system works and use it as a tool to augment the body. In public interactive installations, where the audience interact using their body, usually the movement is not so interesting because people spend just a couple minutes in the space and have this weird tendency to raise and shake their arms randomly. There is a interesting and funny article about this by Golan Levin titled Hands Up! A Visual Essay on the “Media Art Pose” (2006)[xii].

Ana Carvalho: Very often, visual artists work in collectives and the many projects you are participating underline this rule. More important than to know of this is to know how artists work together. I would like to know what is it that you look for in the several collaborations?

Rodrigo Carvalho: The audiovisual and interactive art is a very multidisciplinary field, combining people from different backgrounds that overlap, from music and visual arts, to electronics and computer science. Therefore, to work in a group is very common. In my particular case, I am not a musician and I don´t dance either. My background is in graphic design, and I have learned later how to code, using processing, Max MSP and Quartz Composer, and to use some electronics, such as Arduino and sensors. My focus is essentially on interaction and creation of realtime visuals. Therefore, in most of my projects I have collaborated with other people, especially with musicians. What I look for in collaborations is, on one side to expand creativity. For example, through group brainstorming you get more ideas and different points of view than thinking on yur own, and, on the other side, I get other people’s expertise and skills which I do not master. Also, it is more fun. 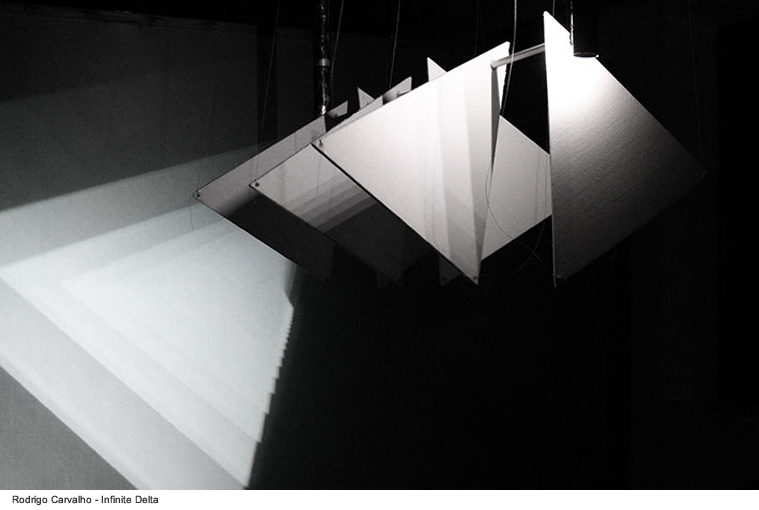 Ana Carvalho: In the imaginary of your work does literature play an important role? If so, which authors and works would you relate to your aesthetic sound and visual performances?

Rodrigo Carvalho: It is maybe a cliché, but I have a tendency for sci-fi, dark atmospheres, minimal black and white graphics, and dystopian near future scenarios. William Gibson’s near future worlds, such as “Neuromancer” (1984) and the rest of “Sprawl trilogy” (1984 – 1988), are clearly an influence and also “The Three Stigmata of Palmer Eldritch” (1965) by Philip K. Dick. These are two of my favourite sci-fi stories ever.

[i] Boris Chimp 504. Live visuals by Visionphone (aka Ricardo Carvalho) and sound by mEEkAlnUt. To know more about the project, visit the website: http://borischimp504.com.

[iii] Gmunk is a visual and design director working across moving image and media. To know more about his work on Tron and Oblivion, visit his portfolio: http://www.gmunk.com.

[iv] Breakdown is an interactive audiovisual dance performance presented at the Ears Eyes and Feet event in the B. Iden Payne Theater, May 2014, UT Austin Texas. For more information about the project: http://visiophone-lab.com/wp/?portfolio=breakdown.

[v] WITH OUI is an audiovisual dance performance presented at the Ears, Eyes and Feet event in the B. Iden Payne Theater, May 2015, UT Austin Texas. For more information about the project: http://visiophone-lab.com/wp/?portfolio=with-oui-2015.

[vii] Sound+Visual+Movement is the research blog by Rodrigo Carvalho: http://s-v-m.tumblr.com.