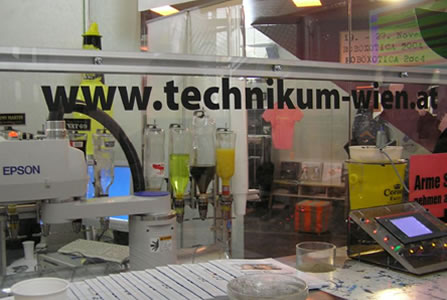 Roboexotica is the first and inevitably leading festival concerned with cocktail robotics .

Until recently, no attempts had been made to publically discuss the role of cocktail robotics as an index for the integration of technological innovations into the human Lebenswelt, or to document the increasing occurrence of radical hedonism in man-machine communication. Roboexotica is an attempt to fill this vacuum. It is the first and, inevitably, the leading festival concerned with cocktail robotics world-wide. A micro mechanical change of paradigm in the age of borderless capital. Alan Turing would doubtless test this out.

Scientists, researchers, computer geeks and artists from all over the world participate to build cocktail robots and discuss about technological innovation, futurology and science fiction.

The topic of this year’s event is Dreams of Regulation:

The dream of a universal or an interdisciplinary science is an old idea that is continually arising anew. Despite, or precisely because of, the increasing specialization of the sciences, the twentieth and twenty-first centuries have brought forth numerous visions of a new interdisciplinary science transcending the limitations of traditional sciences mechanistic and analytic thinking. Cybernetics, the theory of dynamic systems, artificial life research and robotics are (or have been) among the hopeful candidates for such a new science. It has been repeatedly attested that these new disciplines could develop a (more) comprehensive language able to bridge the gap between the so-called “two cultures” of the natural and the human sciences. One might cite the example provided by the famous Macy Conferences, in which mathematicians, physicists, biologists and anthropologists cooperated.

New forms of knowledge and knowledge production and new ways of creating artifacts are made possible by cybernetics and robotics. Today many robotics specialists fall back on cybernetics as a resource for ideas in realizing new technological developments. Our symposium will focus on epistemological and ontological affinities and differences as well as those found in the production of artifacts and will put special emphasis on interdisciplinarity and notions of a universal science