Combinations and collaborations create a lot more distinct opportunities to create, just as the more numbers you have in a lottery, the more possibilities exist. They often say that to be original, you can merge two existing ideas, so it stands to reason that artists are using their individual portfolios of interests to feed their artistic processes, something I became acutely aware of during my recent visit to The Lowry in Salford Quays, near Manchester, England.

Right Here Right Now has been the first exhibition of its kind to be held at The Lowry, acting as a digital showcase led by curator Lucy Dusgate and her team. The installations and works on display combine visual arts with other fields, such as video, coding, electronics and sound engineering.

It is inspiring to see a variety of fields overlapping and how each artist has interpreted the digital landscape in an extremely original fashion to culminate in a synaesthetic tapestry of delights. 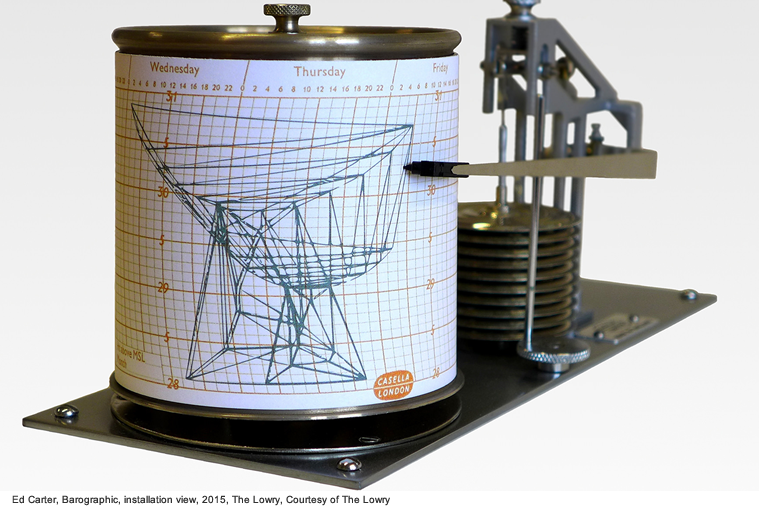 In particular, Nikki Pugh and Ed Carter have come up with novel ways of capturing the digital zeitgeist, with Pugh’s Colony and Carter’s Barographic. I have chosen to highlight these two works as I was intrigued by how the boundaries of art could be blurred to go beyond the principally aesthetic and touch on the invisible fabric around us. In their respective unique styles, they have taken what is essentially contained within the air we breathe, transforming it into something visible and to some degree tangible.

These two artists have entirely different focuses and reasons for choosing their methods. Pugh concentrates on the manmade waves around us, borrowing existing technology (GPS) to inform the journey of her robots, whereas Carter has concentrated on thenaturally occurringenvironment within the Lowry and attempted to produce an alternativemanifestation for these atmospherics by creating a musical score.

Something these artists have in common is their deep-rooted need to collaborate, or as Pugh puts it “have a two-way conversation”. Their work is enhanced by the contributions of others, be it architects and coders in Carter’s case, and walkers and athletes in Pugh’s. 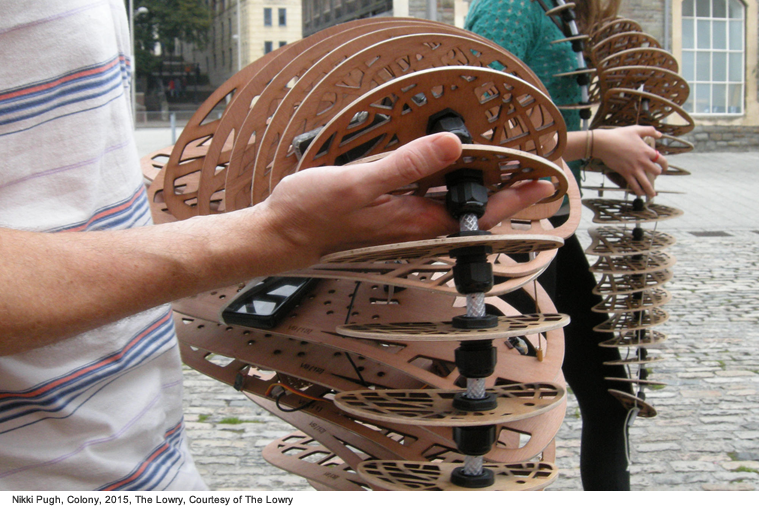 Nikki Pugh is a graduate of the University of West England, Bristol, and incorporates her love of walking and movement into her pieces. In Colony, she programmed her “critters”, two small mechanical robots, using the Arduino platform.

The idea being you take thecritters out when you go walking around a pre-defined route, and they react to the how the GPS signals interact with the “built-upness of the environment”: “They are designed to be used as tools, so it’s quite strange for me to see them inside in a gallery context where they are not being carried by a person. They are part of a wider walking experience that I am in the process of developing at the moment, so these are still prototype versions. The final version will involve about half a dozen people each walking with one of these critters to look after as they move through the city.” (Pugh, 2015)

Pugh denies having a particular “message” with the critters, as she states the reason for the critters as being “more open-ended than that”, as it is more “an invitation for conversation” and an “extended sense that lets you explore [or] experience your surroundings in a different way”. 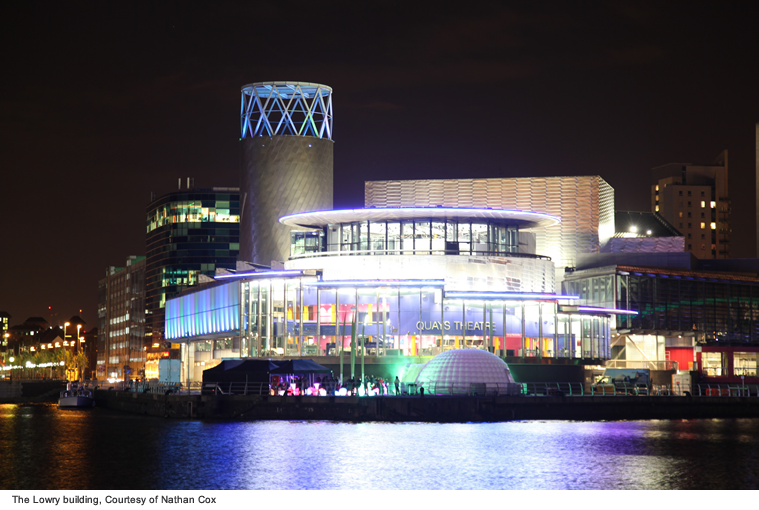 The involvement of other participants is intrinsic to her work processes. Although not artists themselves, they havethe opportunity to feedback to her at various points during the development of a project. She begins with “phases of play-testing” during which participants can try out a new product before it is complete: “I see it as an integral part of the making process; I’ll make a bit of a thing as an early stage prototype, and then I’ll get people in and invite them to use it and then we’ll have a conversation and that’s really interesting for me because they can take it in all sorts of different directions and that informs my next steps. It also feeds my thirst for knowledge because people bring in all their skills and reference points and they won’t necessarily be ones I’ve encountered before.”(Pugh, 2015)

Later on in the process, participants come together after trying out the finished piece and “reflect [the experience] back into larger conversations about how we use public space and about how we become trained to behave in different ways”.

Far from wanting to track people’s precise coordinates using the technology, she is more focused on capturing the mental journey of participants, their struggles, their progress and the shape of the movements they make: “[I’m] interested in different ways of following someone’s progress – I’m working on another project at the moment where instead of simply logging a series of coordinates and marking them on a map, I’m making a mechanical cabinet that I want to use to communicate the duration of the journey and the effort that goes into it. It will respond to GPS data that is being transmitted back from someone travelling by bicycle, but I’m trying to put that into a sense of distance covered or you know, whether it’s a steep uphill or whether they’ve been coasting downhill and those kind of more sensory type experiences rather than just that quite sterile pin marker on a map.”(Pugh, 2015) 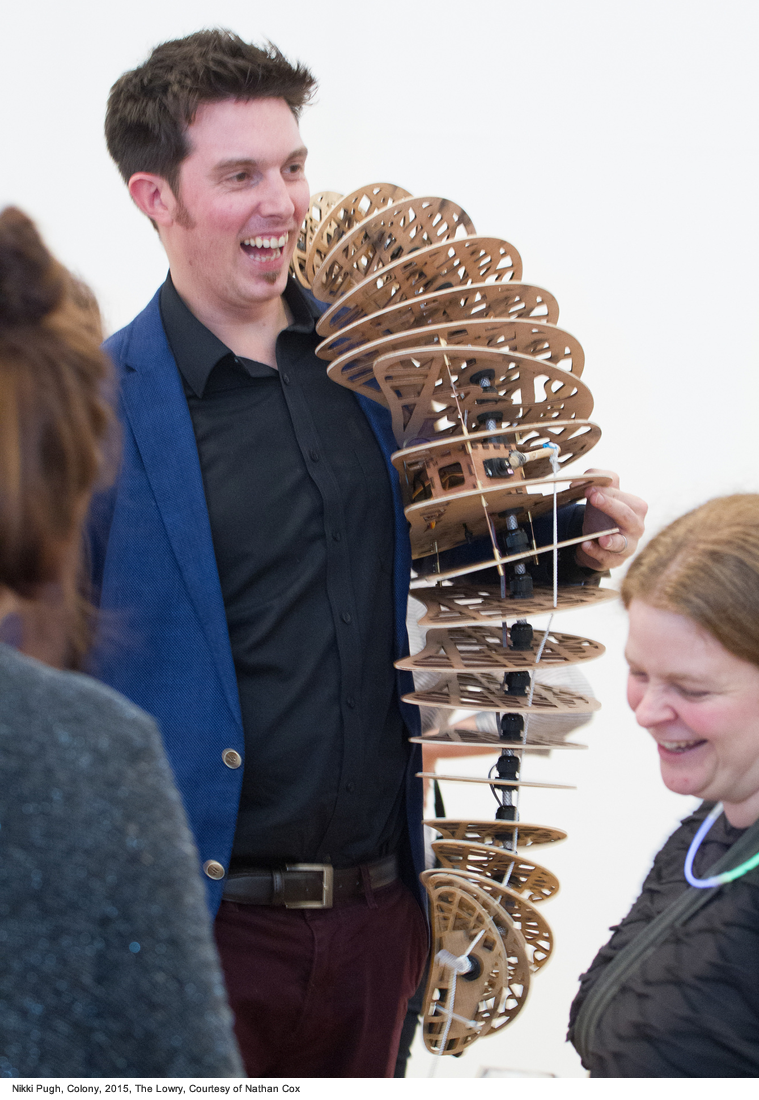 As for her thoughts on the originality of combining different fields she puts it thus: “I’m not sure I’d go so far as to describe myself as being a polymath, but certainly I enjoy ‘intellectual omnivorousness’ (a phrase she credits to Sara Hendren – Twitter handle: @ablerism). I find talk about specific disciplines difficult because, for me, one of the great things about working as an artist is that it’s all fair game and I can draw tools and inspiration from anywhere. Coding and electronics are part of that, but Colony in particular also weaves together threads from pervasive gaming and areas like mobility studies and place making.

I originally trained in materials science and see both that and the work I do now as being based around asking questions of the world around me and then doing experiments to find out more. I think my practice is more strongly defined by an approach to enquiry rather than by particular tools or materials I may employ with individual projects.”(Pugh, 2016)

Another aficionado of movement with a notableinterest in transformation, Ed Carter is a musician at heart who has successfully managed to transcend the boundaries between the art and music disciplines. A graduate of archaeology with no formal training in either music or fine art, his true passion is obvious through the lens of a webcam,which looks onto an array of musical instruments, lending his workshop more a look of a music classroom than an art studio: “I’ve probably got a longer track record in composition and in making music, but I suppose I’ve generally worked in terms of writing music within the arts industry rather than the music industry, if you were going to separate them into industries. I’ve never really had a particular association with the music industry, and so a lot of the music I’ve done is within a fine art context” (Carter, 2016) 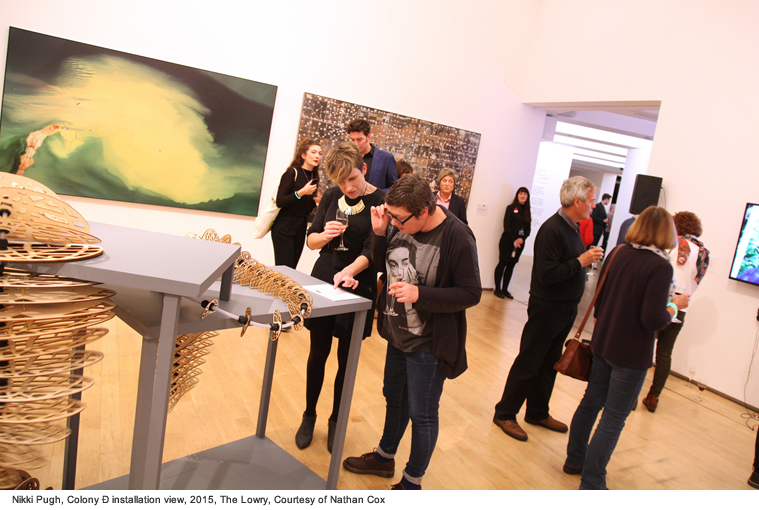 Barographic is his contribution to Right here Right Now, and forms a core part of the exhibition programme which included a recital of his site-specific graphic score on 6th February.

This graphic score is taken from atmospheric pressure readings, using the Lowry’s architecture as a sequencer. The Barograph can be viewed within the Right Here Right Now gallery space and its inner workings are described to us thus: “Barographic has got two elements to it… it’s a graphic score project and it’s a process-based composition. One aspect is that I take the architecture of a space and turn it into a sequencer for creating music, so with the Lowry I’ve taken the geometric forms that make up the external architecture of the building and use their proportions to trigger sounds, so it’s a sequencer, the structure creates the patterns in the music. The second aspect uses barometric pressure. Atmospheric pressure readings that are taken within the building – there’s a barograph installed in the Lowry at present collecting data – this creates charts which I use as a graphic score. So rather than traditional notation, I look at the way that the graph evolves and use that as a way of creating new music. So it’s a site-specific composition, essentially.” (Carter, 2016)

Citing Iannis Xenakis, the 20th century architect who famously combined music and mathematics, Carter confesses a fascination with transformation: “A lot of the work I do, I’m interested in that transformation and I end up applying the same concept in different media. There was an architect and composer called Iannis Xenakis. His meta art theory looked at applying a creative concept in different ways and across different media, so he used mathematical forms in his architecture that he also applied to his compositions, and I think that is a really interesting way of working.” 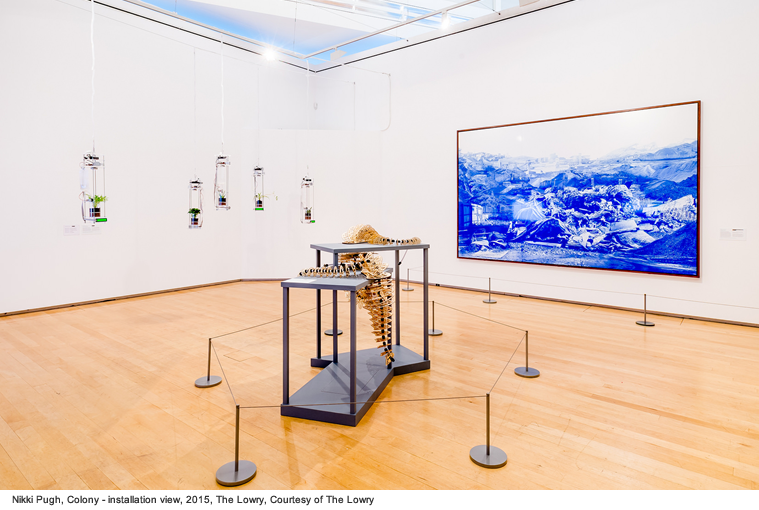 As both Pugh and Carter concentrate on developing clever ways of perceiving the environment around them, one acknowledges they display a certain amount of trust in giving up an element of control over their projectand therefore, the outcome. I put to Carter that these projects must occasionally meet an undesirable result, but he has it all in hand, by admitting he applies “an aesthetic” and chooses the instrumentation to “set the tone”: “I suppose in a lot of ways, it’s a similar satisfaction you get from a collaboration, in that you know that there’s another factor that will dictate certain elements of the project. I think one interesting thing about it is that by establishing parameters and setting a framework within which the unknown information is going to fall, you give it a shape and you can set limits of how wrong it can go.” (Carter, 2016)

As a convert to the digital arts, could he be doing what he is doing a hundred years ago in the pre-digital era? “The principles that underpin the approach for something like Barographic are yes, something that could be applied without the digital technology. Iannis Xenakis was doing his work in the middle of the last century and he created a very early computer system (UPIC) for producing graphic scores and synthesising drawn scores, but previous to that he was creating pencil drawings and then mathematically applying a process turning it into sheet music for musicians. There’s no reason why that mathematical process needs the digital intervention. However, the fact that it is available means I can create these animated 3D models (using the open source software Iannix), making it much easier for audiences to understand the relationships.”(Carter, 2016) 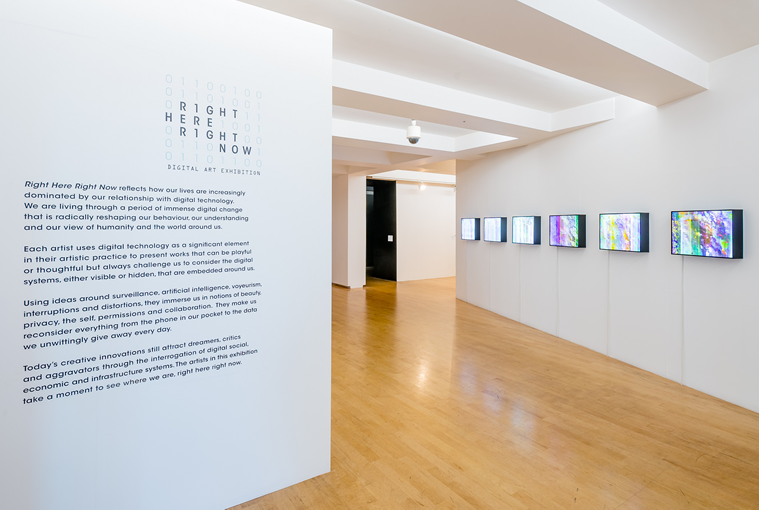 Right Here Right Now offers many insights into the benefits of collaboration, whether that is with other creatives, participants you let into your project or the visiting audience who get to try something out within a gallery. The installations on show give an exciting perspective of the results obtained by mixing skillsets just as Pugh and Carter have demonstrated. Theirs are only two examples of the many thrilling projects I might have focused on from this exhibition.