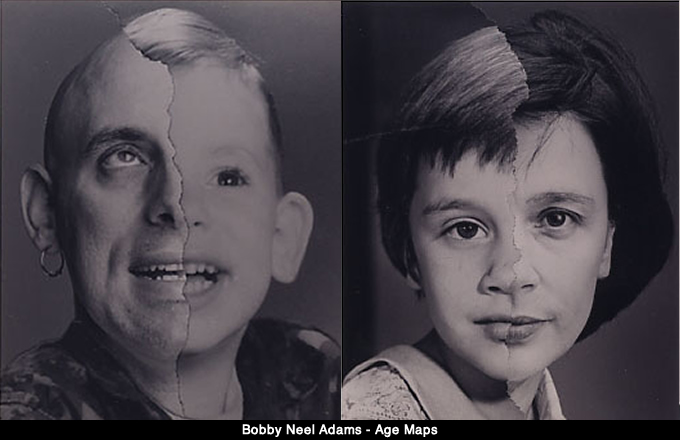 Bobby Neel Adams is an American artist who shows how photography can be an artistic medium to talk about science; for example the transmission of the genome or the mutation of nature. He was born in Black Mountain, North Carolina and now resides in New York. His work is held in many collections such as Greenville County Museum of Art, Houston Museum of Fine Arts, International Center for Photography, Anne McDonald / ARTSPACE, and has been shown nationally and internationally winning numerous Grants.

Much of Adams’ photographic work addresses the transformation of the human body and its appearance by aging. He often shows the differences between the youth and the old age; emphasizing facial features altered by the passage of time.

One of his most important artworks is Family Tree, an old project on which Adams returned in 2007, photographing immediate family members individually and combining their portraits into one picture. He calls this technique “Photo-surgery” a term he coined in the 1980’s. The Family Tree series shows the visual DNA passed down from father to son and from mother to daughter. Contrary to the “biotech” trend, he has chosen to show that science and art can overlap without doing the effective manipulation of the living creatures, like the biotech artists as Eduardo Kac or Marta De Menezez.

So, although he shares similar inspiration with other practices, his cannot be labeled “biotech” or “new media”. 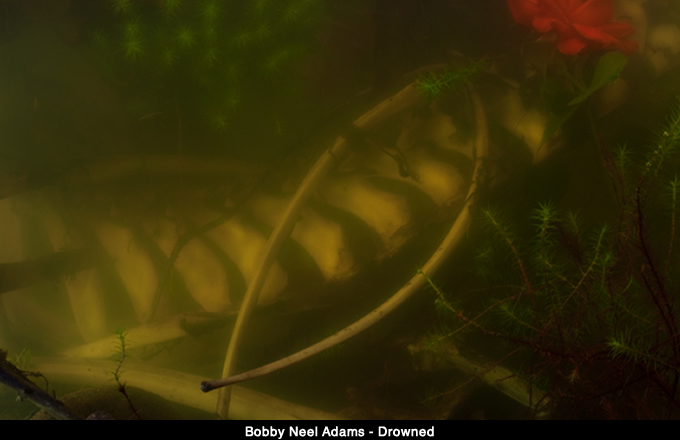 Laura Capuozzo: I’d like to know more about your interest in science topics and your artistic activities. Much of your photographic work addresses the transformation of human body by aging. Do you think that the fear of the passage of time is a hallmark of our present society?

Bobby Neel Adams: Definitely. God got it backwards. If I were God I would have started people as a corpse and let them grow younger. That way you’d have something to lovely to look forward to, like suckling your mother’s breast and crawling back into her warm womb. Just kidding.

Most everyone fears getting old and broken down. Last year I was at a party of rich ex-New Yorkers living in Florida the geriatric capital of the world. Nearly every woman in the room had her facial skin pulled as tight a drum skin. There was no facial expression in the entire room… scary.

Laura Capuozzo: What do you think about the wish of having a perfect and invulnerable body?

Bobby Neel Adams: Well that would be nice wouldn’t it? But it’s not going to happen, at least for me. All of us are self conscious about some aspect of our bodies. I would suggest that even super models are most critical of their bodies and would be more likely to change their bodies through surgeries or other medical procedures. Vanity is a horrible curse. I am most attracted to how people move in the bodies they are given. If they are fluid they are more likely to be content with what they were given. 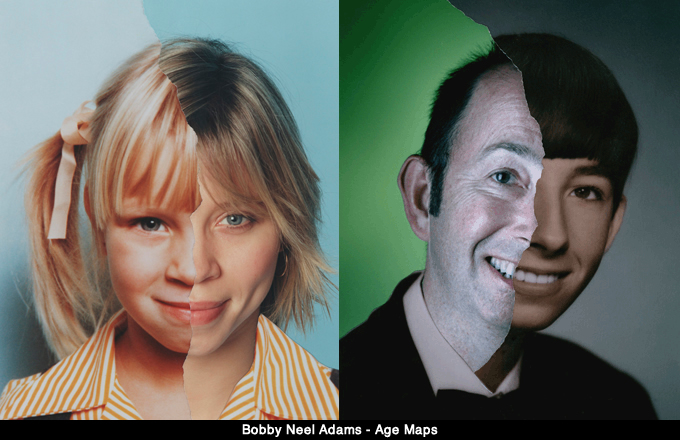 Laura Capuozzo: According to you, this wish and the search for perfection could be a reason for subjecting oneself to plastic surgery?

Bobby Neel Adams:Absolutely. I can think of no other reason for getting your body hacked up by a so-called doctor. But look what happens when something goes wrong – monsters are created in that search for beauty.

Laura Capuozzo: About the term “surgery”, you call your work “photo-surgery”, because you alter photos through manual incision and collage.

Bobby Neel Adams: Yes. Like a plastic surgeon I alter portraits of people through manual incision. But more importantly it is aging and genetics that produce the most astonishing results.

Laura Capuozzo: Then you use only manual photomontage technique and reject any digital ones, like Photoshop. Do you think that digital manipulation of the images has contaminated the photographic practice? In other words, do you see a digitally altered photos as an “impure” photo?

During the first Gulf War, “The New Republic” magazine ran a cover of Saddam Hussein with his mustache altered to look like an Adolf Hitler mustache and never told the public that the image had been altered. (I can’t find an image of this cover but there are stories about this on the web). After O.J. Simpson was arrested for murdering his wife, “Newsweek” and “Time” ran the mug shot photograph of Mr. Simpson. Time digitally altered their cover to create an image of a very black – more menacing looking person.

I suffered from having one of my own photographs digitally altered by “LIFE” magazine. In 1992 I was hired to create an Age Map for the magazines cover. The editors only told me that it was a story on Aging. After I create the image they sent the picture to the Art Department and removed the tear running down the middle and added color to one side. Finally a Jr. Editor informed me of what was going on but by the time I saw a copy of their changes it was already being printed. Needless to say I was not very happy about this. When I finally saw a copy of the cover it became immediately clear that my montage was at odds with their agenda. In block letters said “CAN WE STOP AGING”.

My image described the aging process and their story was about reversing or slowing down the aging process. Going backwards. I am not a purist. In the arts I am all for artists using every tool in the box and that includes digital manipulation and do not believe artistic images need to be labeled “digitally altered”. I have not worked that way because none of my projects would have been enhanced by the use of photo-shop. Also I presently don’t possess the skills to use this tool. 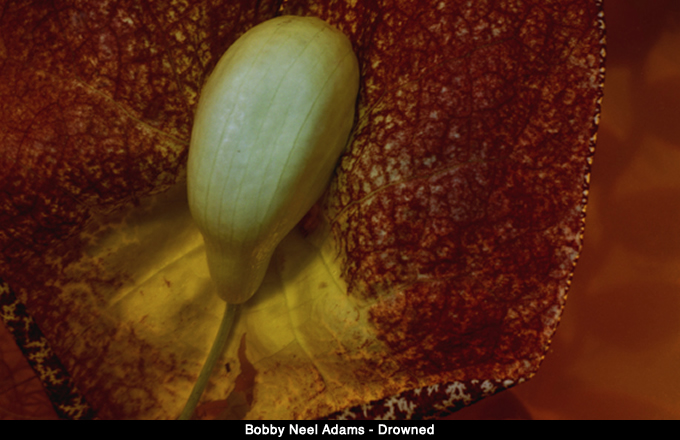 Laura Capuozzo: One of your projects, Family Tree, investigates the passing down of DNA from father to son and mother to daughter. I would like to know the origin of this interest?

Bobby Neel Adams: After I made the Age Map series my mother and father were visiting me. I’d been mesmerized about how some children resemble one parent more than another. I decided to test this on my own family and made a photomontage of me and my mother, and me and my father. It ends up that I resemble my mother from the nose down and resemble my father from the nose up. I expanded this project and began photographing other families.

Laura Capuozzo: You use visual art to explore a scientific theme: what is your relation with scientific topics and how do you think the relationship between art and science?

Bobby Neel Adams: A very fine thread separates the arts and sciences. A good scientist and artist both use their creative instincts to solve problems and create new work. They both pay attention to their so-called mistakes and use them to move forward.

In my Age Map photographs I found that people’s natures are developed at a very early age. An introspective child will become an introspective adult. A cheerful child will be a cheerful adult. Etc. I later read that child psychologist confirmed a theory that I learned making my photographs. My Family Tree photographs visually document the DNA that is passed from parent to child. This is something that science proved well before I made these images.

Laura Capuozzo: Do you believe that science could be a source of inspiration for the artists?

Bobby Neel Adams: Inspiration for making art can come from anything that an artist comes in contact with. Opening the eyes to the world around you is beneficial. Reading, writing, putting oneself in unfamiliar situations are all good things to practice. I assume that the same is true for scientists. 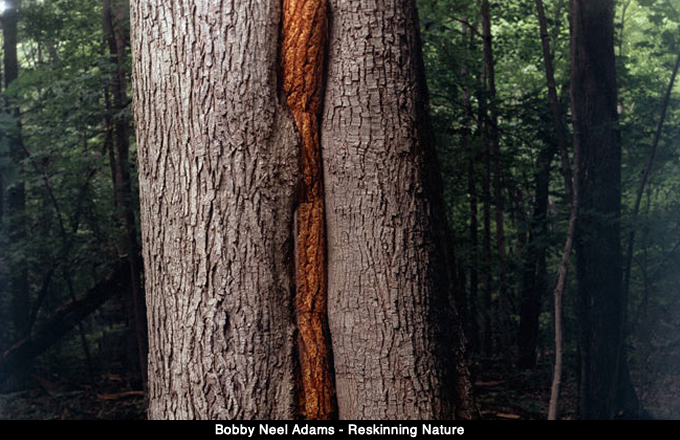 Laura Capuozzo: The projects Reskinning nature and Drowned show your interest in nature…

Bobby Neel Adams: Reskinning nature is also a photo-surgery project executed in a different way. Photographs of material are made and printed. I then search for trees that are missing bark or have holes in them. I place the photographs into the missing gaps to create a photographic bandage over the wound.

Drowned is a series of Vanitas style photographs. Vanitas comes from Latin meaning “emptiness” and the subject matter is often of skulls and rotting food. The subject matter is considered by some to be morbid in its depiction of death and decay. In these images we are reminded that life is fleeting and death is always lurking around the corner.

Laura Capuozzo: In Reskinning nature the trees seem to be a sort of hybrids because you integrate their natural appearance with artificial elements: what do you want to suggest?

Bobby Neel Adams: Reskinning nature is an intervention. Hopefully the images suggest both mans’ dominion over nature. They might also suggest an attempt at surgically correcting the scars of life with artificial materials. 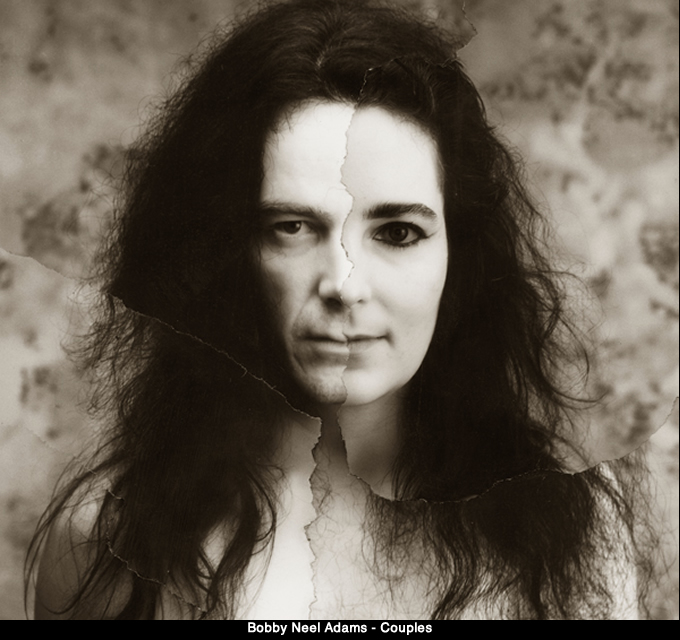 Laura Capuozzo: What does the relation between natural world and the artificial one, created by men, mean for you?

Bobby Neel Adams: Hard question. Things are a mess. Mans (mostly men) depletion of our natural resources for greed and an attempt to make our selfish lives more comfortable is destroying our planet. I am a pessimist. I believe we have destroyed the planet beyond repair. It’s too late. Our children will be suffering because of our harm. Honestly I don’t think we have the will to turn things around.