Reshaping the experience of Art: digitization and 3D archives

The destruction of world heritage sites and artworks in Mosul, Iraq, in February 2015, sparked a global movement to digitize and preserve important works and monuments. Institutions and individuals were called upon to create, refine and disseminate digital scans of the lost works of art.

The months following the attacks, we witness the emergence of initiatives such as Rekrei (formally known as “project Mosul”) or Scan The World emerge that would solely focus on building this archive. By being available to anyone having access to a computer and Internet, a fundamental shift operated which is reshaping our relation towards Art and how we experience it.

This process is transforming where we experience Art, as every scanned object is now accessible regardless of location, wealth or ownership. Previously bound to cultural institutions, the digital archive is now easily obtainable to viewers and can be manipulated, collected, and modified free of decorum. In a way it transposes the museum into the computer, peels off all our preconceived behaviors toward the object while granting us new powers on the works by allowing us to interact with the files. 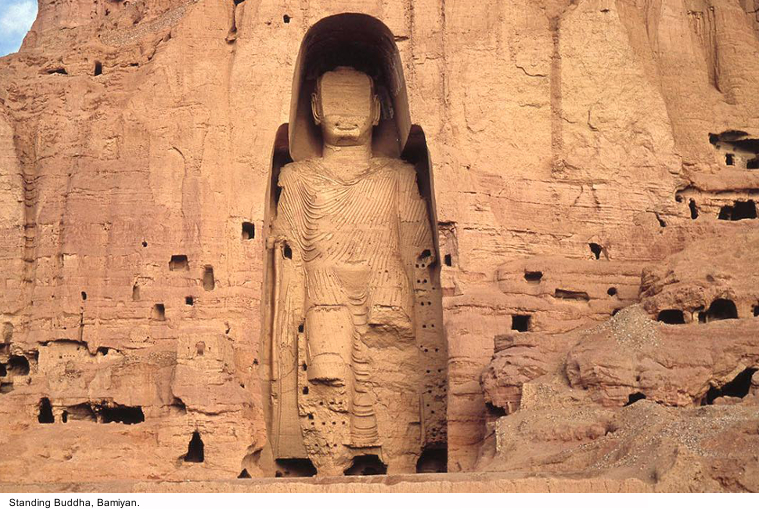 Because these 3D files are the visible layers taken invisibly and directly from the initial artwork or monument, they hold the same cultural value as the physical work. We can easily affirm this because materiality and uniqueness are notions anchored in the art market rather than art history. The fact that The Thinker of Rodin is an edition of 2 or 35, or a preparatory plaster cast rather than the bronze version has little to do with the cultural impact of the artwork itself.

Also, it is not unusual to learn about the greatness of lost works of art through photographs. The cultural value is found in the knowledge of the object rather than the object itself, and materiality is just triggering the desire to obtain it. During the process of this digital translation, the market value and the aura of each and every original piece is stripped away to, alternatively, leave only the history and its cultural value.

By the gathering of these 3D files, the computer progressively becomes a digital museum, and because of this, the question of the cultural value arises. If the museum is the place where artworks rest for eternity as Adorno said[1], the digital one allows reconsidering conceptually and aesthetically these masterpieces by putting them through a 3D program.

The malleability of the scans generates a paradigm shift; these cultural objects become materials that can be rethought and reassessed, actualizing how we learned to memorize them. The archive, therefore, carries a dual function; on one side, when collected, it turns into a digital mausoleum, where its physicality is put in relation with the knowledge we made of it until now. It is approached in the same way as an encyclopaedia[2]; taking each object as a visual reference to the whole art historical knowledge. 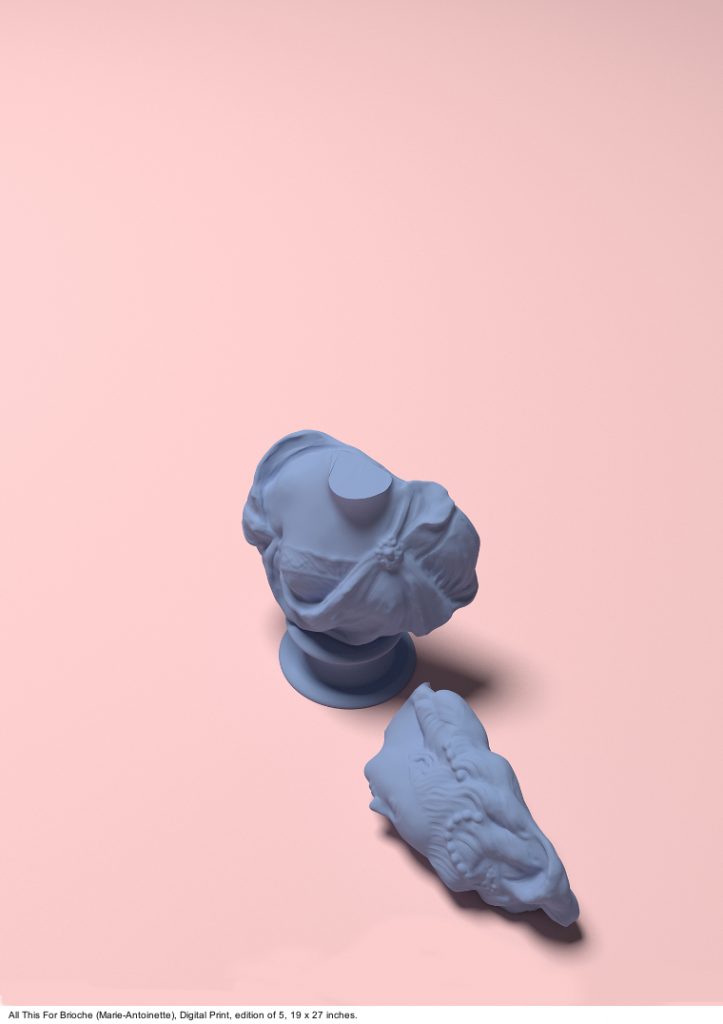 But on the other side, by putting it through a 3D program, it then develops into a conceptually porous substance that allows us to insert new contexts and new ways of seeing. In a sense, it reignites the discussions about the works by introducing a gap with the original, therefore putting it in a liberated and experimental zone.

The institutions have “the power to interpret the archive”[3] as Derrida mentioned, but as soon as the file is downloaded and activated by the viewer, artist or historian, they, in turn, become the interpreters. Moreover, Derrida points out in “Archive Fever” that “There is no political power without a control of the archive, if not memory.”[4]

This led me to search for who or which institutions were behind this initiative and/or providing scans. I then quickly discovered that even though it started as a way to counter the destruction that happened in Mosul, it rapidly switched emphasis on another geographical history by its own institutions:  the Western ones. The destroyed winged lion of Mosul became surrounded by busts of christian cardinals, western allegories of love and second world war monuments.

That historical focus pushed by museums such as the Louvre, the V&A, the Met or the British Museum, concentrates the accessibility and the production of these 3D files to their own collections. Preserving then becomes the privilege of the hegemony; where technology-advanced countries get to define, choose and provide cultural material for the rest of the world. From this stems a cultural colonialism; relegated to the background, non-western artworks are drowned in western ideals. 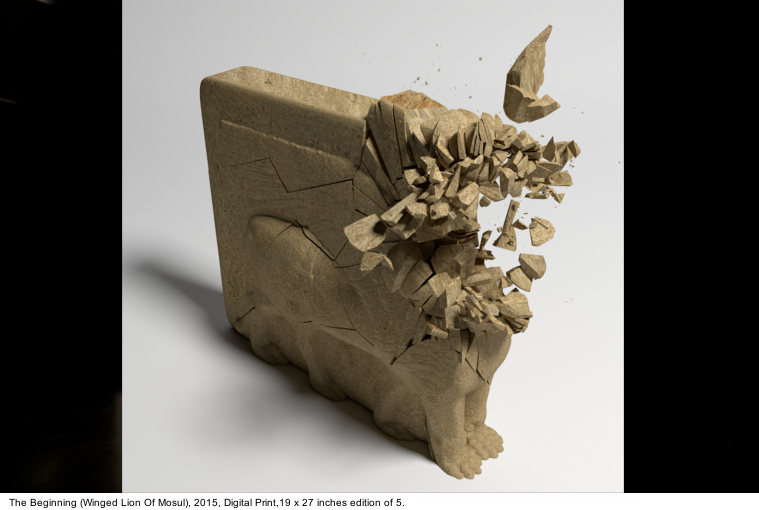 Moreover, it not only emphasizes Eurocentric views on conservation and History, as the explanation given on each piece is mediated by the institution itself but also impoverishes the discourse on non-western artworks, because of the lack of perspective from the community.  This leaves viewers to interact with the pieces on a purely visual facet, which unconsciously erases deeper cultural meanings.

The impoverishment of History and meaning is obviously present with non-western artworks, but it also happens (less often though) with Occidental pieces. Because viewers judge on the work to collect primarily from its aesthetic qualities, they might gather files that perpetuate a colonialist perspective. To give you an example we will take the file of Sir Henry Havelock.

The original work is a monument found on Trafalgar Square and was erected in 1861 to commemorate the general’s accomplishment in recapturing certain cities during the Indian Mutiny of 1857. Knowing this and the important colonial past of England, contemporary viewers cannot feel anything but unease when they find out that this sculpture was included in the archive to be disseminated. 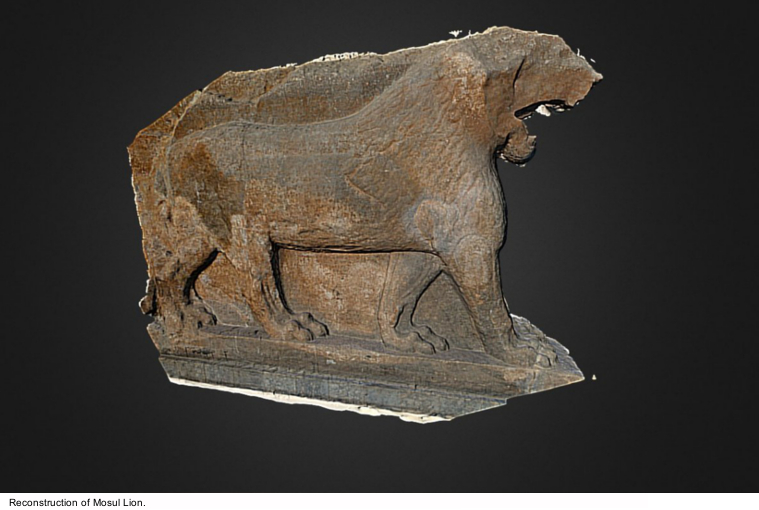 But to feel that uneasiness, you need a deeper research on the original or at least a more expanded history that includes the vision of the “Other” within the artwork to counter this cycle. The 3D archive is a fascinating double-edged sword. It questions anew our vision on the museum, our experience with Art, and the way we collect in the digital era, but can also be a tool for cultural hegemony and where Historical facts are erased or forgotten to the benefit of the institution producing it.