René Daniëls. An Exhibition is always part of a Greater Whole 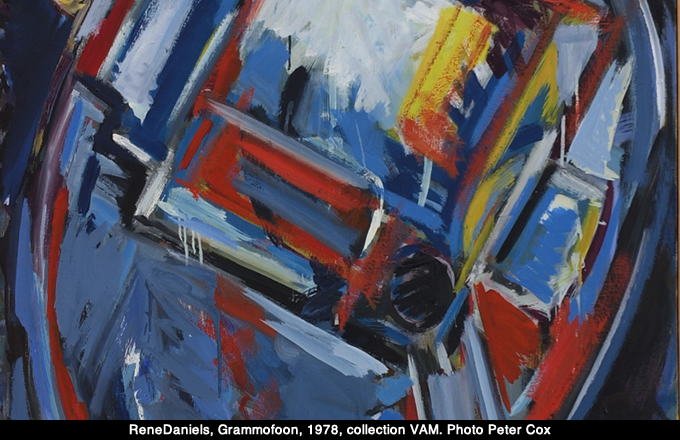 René Daniëls (Eindhoven 1950), is considered as one of the most important Dutch artists of his generation. His new show at the Van Abbemuseum in Eindhoven, An Exhibition is Always Part of a Greater Whole opened the last Saturday 12th May and will run until the next 23rd September 2012.

Eindhoven niet Eindhoven –René Daniëls, Art and Counterculture, is a small show into the bigger one, in which are exposed posters and very rare photos of Talkin Heads, Lou Reed, Sex Pistols, The Strangles, among the other. Every picture was taken during concerts at the Effenaar (renewed in 2005 by MVRDV Architects http://www.mvrdv.nl/#/news). Apparently, during the Seventies and the Eighties, the city was the centre of the underground movement in The Netherlands, in a close relationship with New York on the other side of the ocean. René Daniëls used to spend his time painting alone in his studio while listening to punk, new wave and no wave music at full blast. It is with this sounds, that the spectator is welcomed into the museum. The time travel is completed with a 8 mm film shot by the artist himself. From the beginning the spectator gets carried away and feels the vibrant atmosphere that drove people into action, paving the ground for projects that still persist in the city after almost 30 years.

Among the photos the viewer should be able to recognize De Fabriek – an artist’s run space founded in 1980 and still open (http://www.defabriekeindhoven.nl/) –  one of the places where people organized performances, concerts and exhibitions, and Het Apollohuis, an international platform for new media art, sound art and performance active from 1980 to 1997 (http://www.paulpanhuysen.com/apollohuis/introduction.htm). 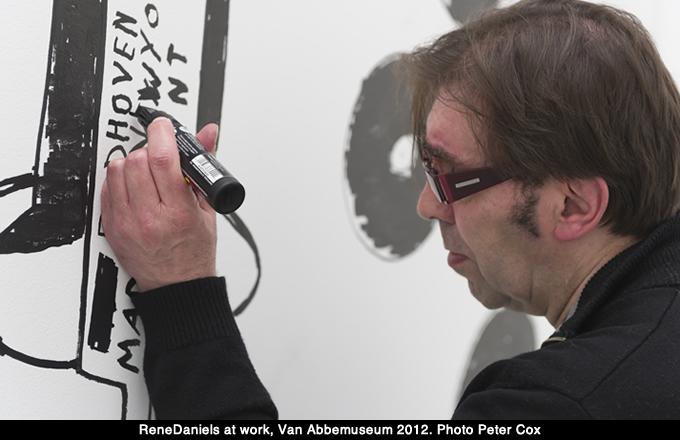 All these different projects made Eindhoven one of the most vibrant cities in the country. In this environment Daniëls developed his creative process, which was uniquely affected by the surrounding atmosphere. He became a key figure, who influenced many young artists based in Eindhoven: not so much time ago I visited an artist who created some works as tribute to Daniëls.

He has always kept up an intense relationship with Van Abbemuseum: he grew up a few steps away from the museum, in 1978 he presented his first solo exhibition followed in 1986 from a retrospective with works from 1976 to 1986. In addition, the museum has a complete collection of Daniëls’ artworks which includes drafts, drawings, sketches and notes produced after 1987, when the artist stopped working because of a stroke. The exhibition is very well organized through many critical apparatus that allow the spectator to understand better the artworks and the actual condition of the artist while he created new drawings and paintings.

A part from the catalogue (Rene Daniëls – The words are not in their proper place, Roland Groenenboom, Rotterdam, 2012) and the magazine (EHV-NY, which is about the relationship between Eindhoven and New York, crucial in Daniëls’ artworks), film maker Jan Thijssen shot a documentary in 2011 (Memoires van een vergeetal (http://www.uitzendinggemist.nl/afleveringen/1251384) . Thijssen intensely describes the artist who – despite his disability – continues painting with the same passion as before 1987 even if with a different style. 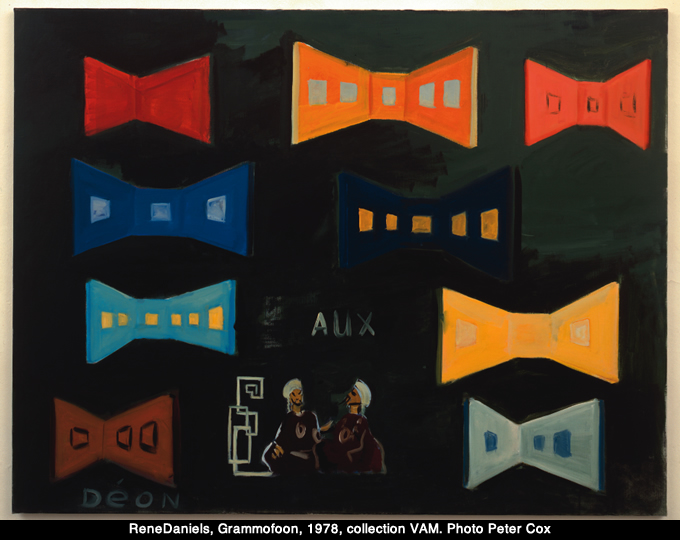 Enough with the biographic details, let’s focus on the pictures. The artist himself introduced us his practice saying : “As far as I’m concerned if there were a secret, I wouldn’t reveal it. But the work is undeniably an extension of a cultural context in which you deal with reality and the higher meaning hiding behind it with some amusement”. The exhibition is organized in several chapters according to the development of his style: the first section provides artworks from 1976 to 1984.

Daniëls started to explore the “visual poetry” following the influence of Marcel Duchamp who was, according to him, the first visual artist to investigate the relationship between literature, visual arts and life. Daniëls’ work is not easy to understand, ‘There is something going on in the work; you just never know exactly what’ said Michael Kimmelman. Daniëls was reluctant to talk about his work. According to him, the viewer should understand the meaning of the paintings following his thoughts and mentally complete them. Following the ‘70s and ‘80s trends he began titling his works adding new layers of meaning to the paintings.

Between 1985 and 1987 it appears the well known “butterfly”. Or better, what it seems to be. Daniëls started producing a series of abstract and perspectival paintings of imaginary exhibition spaces. The forms are repeated on the canvas and the places, that are apparently empty and aseptic, come to life. The butterflies start to move and, another time, we don’t know what is happening but we are carried away by the flight.

Abstraction became the focus for Daniëls in 1987, when forms were even simpler and he started to write sentences on the canvas referring to places and times. The new style appeared to mark a new departure for the artist, which was suddenly stopped by a stroke in 1987. 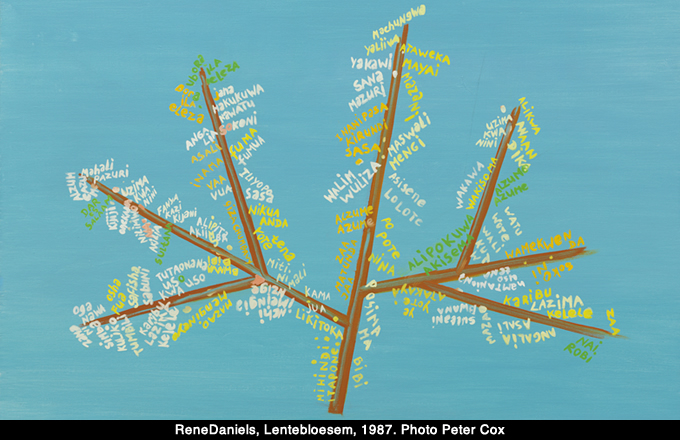 In 2006 René Daniëls started painting again. The works are far from those from the ‘80s because of his partial immobility, but the small drawings preserve some of the initial power. Even if the forms have changed, some elements are the same, such the “butterfly”, the words and spaces. The counter culture and the underground is not represented any more, the work is inspired by the everyday objects –the   living room, television, books and magazines – but at the same time he was able to re-process his own work through a very slow silent process lasted almost 20 years.