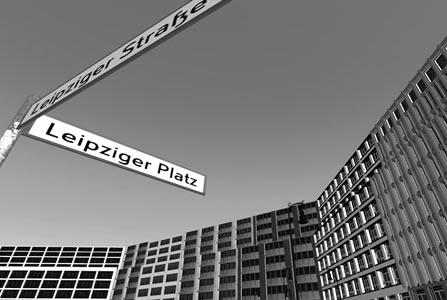 The exhibition hall “Altes Museum” in the virtual world Twinity will open the exhibition: Remap Berlin by Marco “Manray” Cadioli

“Remap Berlin” spreads a thin geographical virus in Google Earth and deals with different levels of reality. The project introduces a series of b&w photographs shot in Twinity, a mirror world that reproduces a realistic 3D replica of Berlin.

The photos shot in Twinity, are then geo-localized in Google maps, re-mapped from virtual to real and positioned in the exact point where they have been shot in the mirror world.

Once uploaded in the photo sharing community Panoramio, the pictures are mixed up with other ones shot in the same geographical point from real life users. Many of these pictures have been selected by Google and can now be found as “Popular photos in Google Earth”: this became a little geographical virus, parts of our memories of the real world.

The photographs are cityscapes, shot by Marco Manray roaming around the still empty streets of Berlin in the beta version. 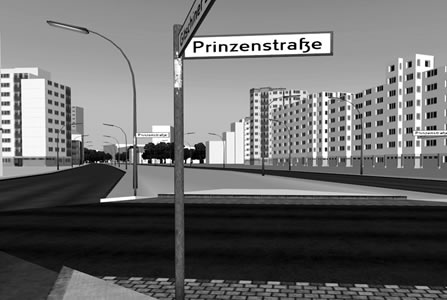 This piece is the new step of Cadioli’s journey around the metaverse – after war games, Second Life and the chinese virtual world HIPIHI – and reflects on the way in which we are shaping the metaverse, and on the cultural impact of this development on the way we experience collective places.

The exploration reaches the city edges, where streets end on the boundary line between land and sky – temporary borders of an expanding universe. Remap Berlin was presented for the first time on Odyssey art+performance simulator in Second Life in July 2009.

“The Remap Berlin series appears as the exquisite corpse of a space where emptiness confines to urban congestion. Like a silent sphinx, Berlin exhibits an architecture of absence, a suffocating openness, a latent solitude. Walking through this melancholic urbanity with minimal aesthetics, the streets of Berlin follow one after the other, as if inhabited by a deliberate amnesia, some kind of poetic control.” Margherita Balzerani – Curator and art critic