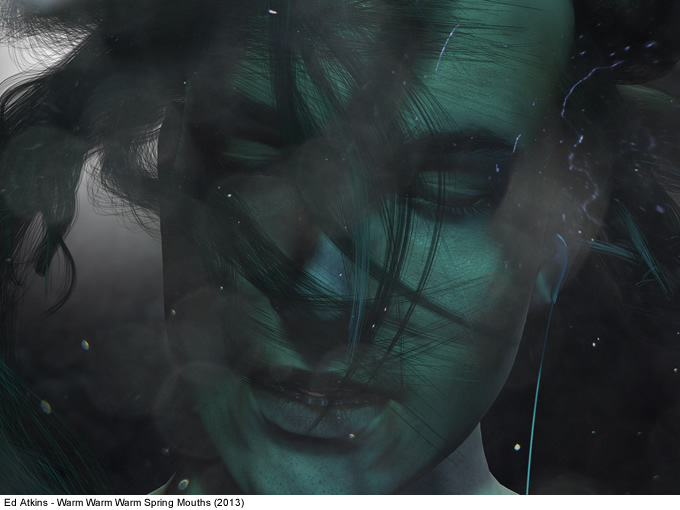 The Stedelijk Museum Amsterdam presents Recent Ouija, the first solo exhibition of British artist Ed Atkins (b. 1982) in the Netherlands. The 1,100-square-meter lower-level gallery in the new wing will be transformed into an immersive environment of monumental video projections, soundscapes, texts and drawings.

Atkins’s work reflects on the unprecedented potential of today’s digital culture and its consequences for our embodied lives. His videos feature talking heads, severed body parts, fragments of music, and graphic text animations. In them, Atkins creates a world of illusion in which bodies perform as digital fantasies, as avatars. Paradoxically, the effect is to make us acutely aware of our real-world bodies and our material life in the physical world.

Beatrix Ruf, director of the Stedelijk Museum says, “When I first saw Ed Atkins’s work it immediately struck me. I think he is one of the most interesting artists of his generation and I am very proud to be able to present the first exhibition of his work in the Netherlands. With his work, Atkins explores the virtuality of our contemporary visual world and its profound effect on the reality of our embodied lives. His high-definition videos and powerful soundtracks confront us with existential questions about mortality, love and intimate relations. In these videos, as well as in his collages and drawings,  Atkins is asking for the paradoxical capacity of media to let our material lives be present in a progressively dematerialized world.” 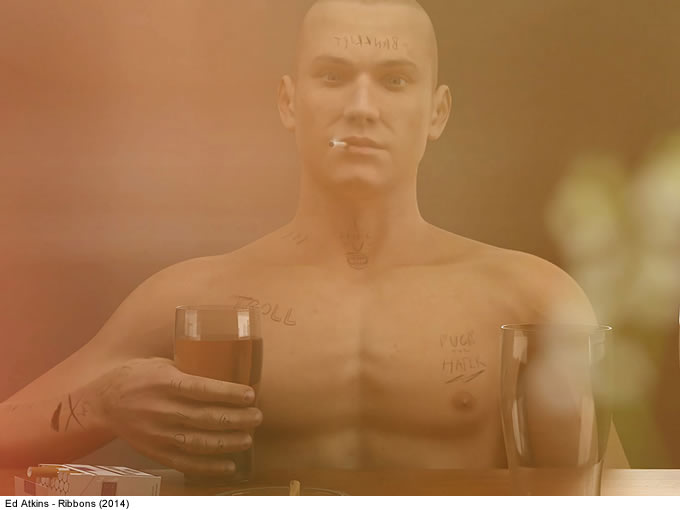 The Stedelijk Museum has announced the acquisition of three works by Atkins: Ribbons (2014), Warm, Warm, Warm Spring Mouths (2013), and Cur (2010). Two of the works will be on show in the forthcoming exhibition, Recent Ouija.

Many of Atkins’s works can be regarded as computer-generated performances. The movements and singing/speaking voices of the avatars are those of the artist himself. In his 2014 video installation Ribbons, which the Stedelijk has now acquired, Atkins shows a shaven-headed figure called Dave. He is a hard-drinking, chain-smoking, sentimental brute, alienated and on the way to some kind of self-destruction. With his melancholy expression and non-stop flow of talk and song, he drags the viewer ever deeper into his world, demanding empathy and violent identification.

Warm, Warm, Warm Spring Mouths (2013) is composed of a looping sequence of rapidly changing images. We see a rhythmic succession of computer animations interrupted by sharp edits accompanied by piercing sound effects. The figure that links them is the same avatar used subsequently in Ribbons—only this time wreathed in a great mass of luxuriant hair. The third acquisition, Cur (2010), is a strong example of Atkins’s earlier work, which focused on ideas of stock imagery and the continued aestheticisation of nature.

The exhibition is curated by Beatrix Ruf and Martijn van Nieuwenhuyzen. 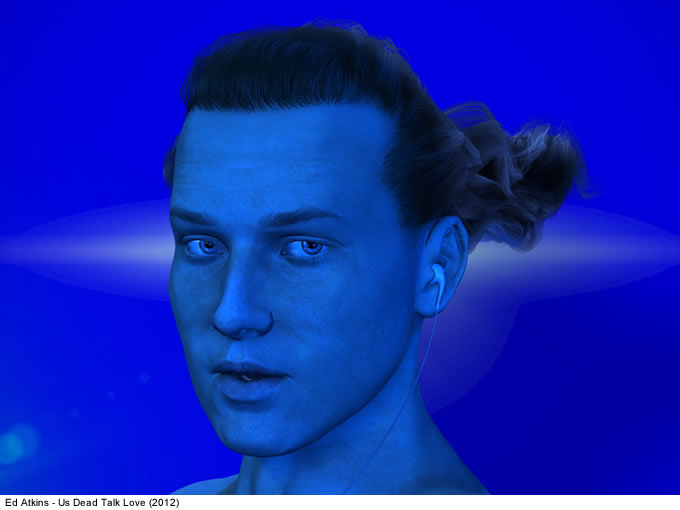 A special, large-format artist’s book has been published to coincide with the exhibition. Edited and designed by Ed Atkins himself, the publication contains new texts and drawings. It is on sale in the museum shop.

A symposium titled “Ed Atkins: performance/capture” will be held on the afternoons of April 25 and 26, 2015. The event will reflect on Atkins’s work and will feature artists, interviews, poetry, karaoke, and films selected by Atkins himself. The themes addressed will include performance, identity, and digital technology.

Ed Atkins: Recent Ouija is made possible with the support of the principal benefactors Stichting Ammodo and Aedes Real Estate, benefactor Desso and the benefactors of the Stedelijk Museum Fund.