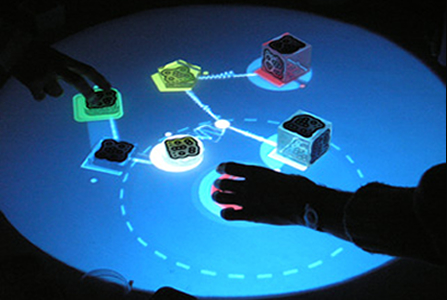 The best way to get your head around this performance/installation is to imagine a bizarre futuristic game of chess that creates music when the players move the pieces.  The Reactable is a tangible electronic music synthesizer developed by a team of researchers and electronic musicians of the Music Technology Group at the Pompeu Fabra University in Barcelona, Spain.  Even synthesiser pioneer Bob Moog himself spent time with the team before his untimely death last year.

This multi-user audiovisual instrument, based on a tabletop interface, allows several simultaneous users or performers to share the control of the instrument by moving, rotating and caressing objects on a luminous tabletop surface (projected via a camera feed onto a big screen) allowing them to create complex and dynamic sonic topologies, with generators, filters, low frequency oscillators, modulators or grinders with associated visual iconography.  The resulting sonic nets, which are painted in permanent evolution, invite the participant to watch, listen, touch, create and play, and give an intuitive understanding of the instrument.

As part of Optronica Lab on Friday 16th March, there will be the live performance by Marcos Alonso and Martin Kaltenbrunner from the Reactable team.  Reactable will also be installed in the Optronica Lounge on Saturday 17th March where the artists will invite people to have a play for themselves.

– What attracts you to working in the live audiovisual realm?  Can you tell a little bit about your background and how it lead you to this point?

All the members of the Reactable team are both researchers in digital audio technologies and musicians. In my case, I have been performing, improvising and designing digital musical instruments for almost 15 years. The last of this series of instruments before the Reactable, a software program called FMOL, which I invented in 1998, was already an audiovisual synthesiser. There was not the intention of having a more complete or rich output; the visual components were there for making an easier, more intuitive and more powerful musical interface. And the Reactable follows that path completely. It is meant to be a musical instrument, which has been designed knowing the importance of visual feedback for computer music performers.

In digital instruments, the performer no longer controls directly all the aspects of the production of sound, being able instead to direct and supervise the computer processes that control these details. In these type of situations, in which performers tend to frequently delegate and shift control to the instrument, all affordable ways for monitoring ongoing processes and activities are especially welcome, and visual feedback becomes a significant asset for allowing this type of instruments to dynamically ‘communicate’ the states and the behaviours of their musical processes.

Performing computer music without a screen may be as scary as piloting a jet without cockpit displays. Our work tries to maximize the information conveyed by these visual components without using text, numbers or conventional WIMP widgets. In that sense, it could be said that being in the ‘live audiovisual’ is for us a kind of collateral effect.

– Can you tell us a bit more about your performance at Optronica Do you use any modified technology or software in your set-up? What do you think of the advances of AV technology in the last decade and how has it impacted on your art?

We use a system of our own, the Reactable, which could be described as a tangible audiovisual synthesizer with a tabletop interface, which allows several musicians share the control of the instrument by moving and caressing objects on a luminous table, and thus creating complex and dynamic sonic topologies, with generators, filters, low frequency oscillators, modulators or grinders. The resulting sonic nets, which are painted in permanent evolution, invite the participant to watch, listen, touch, create and play, and help understanding the instrument. It is hard to describe it in a few words; it is much easier to understand what this is all about by looking at a picture of the table surface.

From the performance point of view, it should also be stressed that we are performers and improvisers, and that everything that comes out from the instrument is performed in real-time. We never use sequences or prerecorded tracks. The same applies to the visuals: they are synthesized in real-time according to what we do at every moment.

– Who are your artistic influences, both visual/music and audiovisual?

It would be impossible to mention all our musical influences. I think each member of the team comes from a slightly different background. In my case it’s more free jazz, where in the case of Günter and Marcos, it would probably be more electronica. For the visual side, I see our work related with other artists and colleagues who have developed audiovisual instruments, such as Golan Levin or ixi software.

– Why do you think it’s important for festivals like Optronica to happen?

Visuals are becoming more ubiquitous in electronic music performance, where most of the time they are just there to fill the visual gap, to decorate the not so exciting image of some laptopists looking artistically at their monitors, and bringing contents that relate and add little or nothing to the music being performed. I do not believe that more is necessarily better and I think it is extremely important that festivals like Optronica exist, showing the potential of true audiovisual performances.