Raquel Meyers and the Teletext transmission 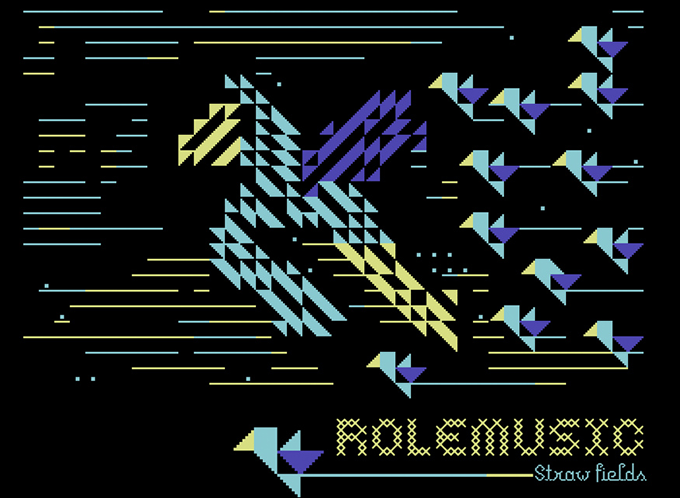 Lightrhythmvisuals released her collected works in 2010 on the DVD Useless, Yet Crucial. It shows her characteristic mix of black humour, surreal imagery and low-res graphics. Meyers grew up with black and white photography, singing in grind core bands, selling books and watching disturbing movies. During her time in Entter (2000-2007) she developed a frenetic style that is still “blowing minds (or causing seizures)” as Wired put it. There is little if any sentimality for old technologies. It is the brutalist way that fascinates her, noticeable in animation works such as The Emperor’s Snuff Box (2008) and the stop motion work Dodekafobia (2009). The frenetic brutalism culminated with Polybius (2010) that mimicked a sense deleting arcade game from the 1980s, and her solo A/V performance Error Holidays (2010).

Since 2004 she has performed at VJ-festivals like Mapping and Cimatics, at 8bit events like Tokyo Blip Festival and the Playlist exhibition, aswell at Transmediale, LABoral and LEV Festival. She currently lives and works in Sweden. 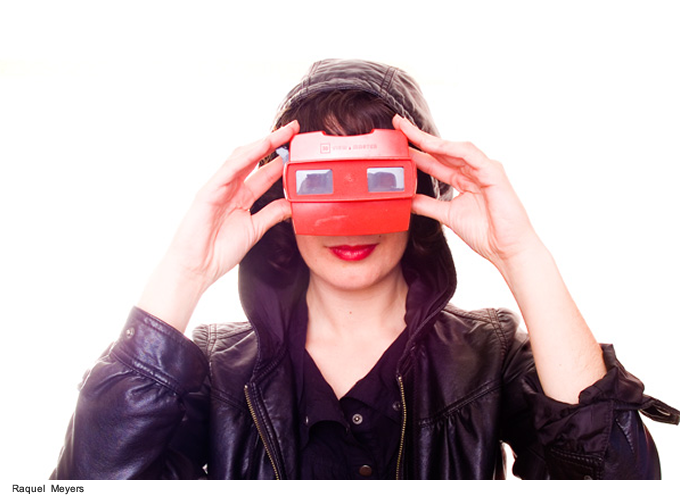 Mathias Jansson: When did you interest for text start?

Raquel Meyers: It all began when I started to work with PETSCII (the ASCII for the Commodore 64). That was about two years ago, I think. Instead of drawing pixels, I type characters and symbols on the keyboard. The way of thinking and imaging changes completely, there is no pixels or blocks anymore only the characters set, and I don’t really need anything else. It’s really direct, since you have all the symbols directly on the keyboard. Start the computer and after a second you can start making graphics if you want. So far PETSCII and Teletext are my favourite text modes

Raquel Meyers: Yeah, that has been inspiring. From the typewriter concrete poetry to the tessellations in the Alhambra. There is a lot of stuff to be inspired by. In fact, I run a Tumblr where I collect my favourite text graphics, together with Goto80. We started it because, oddly enough, there wasn’t anything like that around. Something that merged all the different aspects of it. The idea is to create an archive that includes formats, media and styles from the ancient times till nowadays related to that subject. And it becomes full of surprises and an endless source of inspiration. It becomes a very wide area when you think of it as a form of pattern art. I mean, the alphanumerical ASCII-derivates are only the beginning of text mode art. PETSCII has more complex symbols, which is sometimes not so close to ASCII but looks more like cross stitch, tiles, mosaic, and so on. 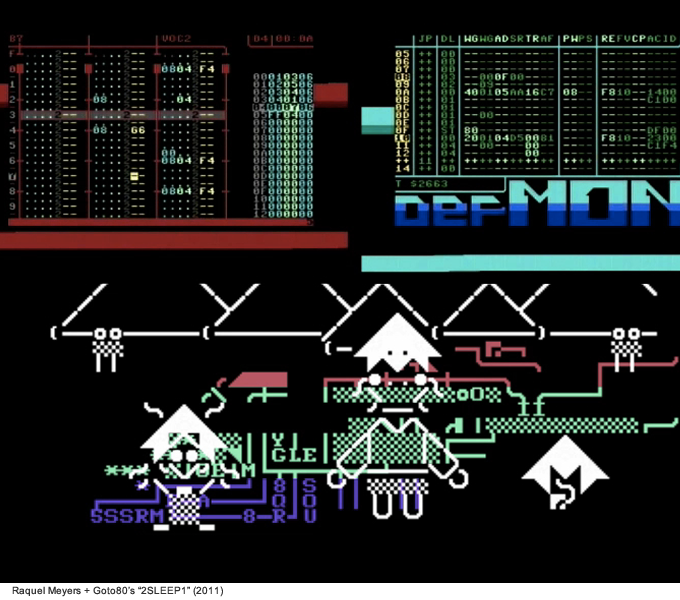 Mathias Jansson:  Nowaday, we have access to HD-TV but when you look at TEXT-TV you find this old fashioned font that doesn’t seem to have changed since the eighties. You have been working with Teletext in many of your works. Why?

Raquel Meyers: First of all, it’s difficult to say what it actually is. Digital or analogue? Data or video? It’s almost hidden in the video signal, like a ghost inside the television. For example, everybody who recorded stuff from TV to SVHS also have the Teletext recorded. If they play the tape and push the Teletext button, it’s like travelling back in time. You can interact with it just like normal

Thanks to Peter Kwan, I can now produce my own Teletext signal. Since most televisions have this “transparent Teletext mode”, I don’t really need a video mixer. I can actually perform live only with a remote control and a TV. But it’s more fun to mix it with other things. Teletext and PETSCII goes pretty well together.

If I want to record these performances, my only option is to film it with a camera. Even if the TV has an output, it doesn’t send the Teletext as I perform it. It only sends out the constant stream of pages, but not the way I play with them live.

Mathias Jansson: You participated in the Teletext festival ARD in Berlin in September. Can you tell me about the exhibition and if you can see any special trends in Teletext art today?

Raquel Meyers: Well, Teletext is pretty mainstream in northern Europe. It’s still around on both public service TV, and commercial TV. In Sweden the public service Teletext app was one of the most popular, both for iPhone and iPad. In public service TV there’s not so much graphics, but on commercial TV there is plenty of graphical advertising. A lot of the ads are for dating and porn. Rhizome reblogged a post I did with Teletext dating ads, and that was sort of an odd context so advertising in, I thought. Tarot and sports are popular too. In general, I guess the main trend is conversions. Most people prefer to import images and fix them up, but I like to do it manually, from scratch. The result is very different, and I like to spend time with things.

Mathias Jansson: When did your collaboration with the musician Goto80 start?

Raquel Meyers: We’ve been working together since 2004.

Mathias Jansson: You have done both live performances and music videos to Goto80 chipmusic. Why are we so interested in the 1980s graphic style and music?

Raquel Meyers: Well, text graphics is the world we live in. When we communicate with others, we still do it mostly through text. Social media, searches, databases, SMS, etc. Text is still a very fundamental part of the digital. In fact, text-mode is sort of a symbol for hardcore computing. Hex editors, command line prompts and programming languages are all text. And they are a key to get closer to the machine. That’s one reason that the 8-bit stuff is so popular. But you should talk to Goto80 about it. He can talk about those things forever. He’s publishing an article together with A Bill Miller about ASCII art at the CAC3 conference in Paris soon.

But, for me, the most important thing is that it feels good to do it. Sometimes it’s really direct, and you get a great flow. Other times you have to spend hours to do something very basic. Just like with any other tool. But the difference is that it feels good to use a Commodore 64. It’s not just a tool for work and/or entertainment. To me, somehow it exists outside of all the bullshit. I didn’t grow up with these machines. As far as I know, it’s not nostalgia for me. And it seems a bit conservative to talk about these machines only in terms of retro, appropriation and limitations. As if their relevance only comes from what they are not. But they are incredible machines, in their own rights. Sometimes it seems like the “new media” field has swallowed the capitalist idea of progress completely, and “old media” is only interesting as a deviant. When I feel like that, the demoscene is extremely refreshing. 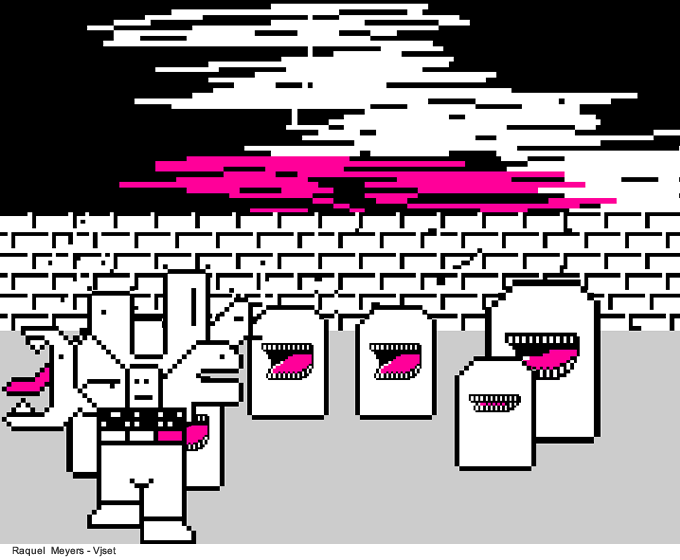 Mathias Jansson: Teletext seems as a small, sub-genre culture. Which would you say are the most interesting artists in the field today and why?

Raquel Meyers: Well, there are not so many artists active today, unfortunately. Teletext, as we know it, is a British standard. But there were many others. Antiope, which was used for the gigantic modem network Minitel, is slightly more complex than Teletext. Telidon goes even further, and features vector graphics. Check, for example, Toxic Wastes from A to Z (coming after you and me) by John Fekner, Graphic Variations on Telidon by Pierre Moretti (1979), Reabracadabra by Eduardo Kac (1985). Probably the most impressive teletext work is Ian Irwing’s Hands Up. It’s an animation series to teach sign language, completely made in Teletext graphics. You can find a playlist of all the episodes on our Tumblr.

Nowadays the works of Max Capacity, Frederic Cambus, Dan Farrimond, Dave Needham, Janne Suni and Rich Oglesby, showed at ITAF. Also, you can just turn on the TV, go to the Dates and Contact pages in the Teletext and find really good unknown artists.